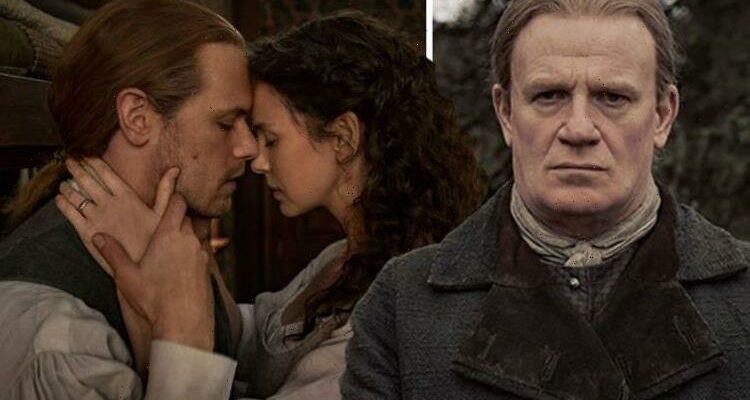 Filming for the new series has officially wrapped but fans won’t see the episodes until early 2022. Fans have been busy speculating what could happen after it was also revealed there would be three newcomers on Fraser’s Ridge, the Christie family. Those who have read Diana Gabaldon’s Outlander novels know Malva Christie (played by Jessica Reynolds) causes trouble as she falls pregnant and claims the baby is Jamie Fraser’s (Sam Heughan). But could a series shake-up see Tom (Mark Lewis Jones) and Claire (Caitriona Balfe) at the centre of a romance storyline?

In the Outlander books, Malva acts as Claire’s surgical apprentice and looks up to the time traveller but when she falls pregnant, things turn sour between the two women.

Malva claims the father of her unborn child is Jamie, which leaves Claire furious as she questions whether her husband cheated on her with a younger woman.

When Malva is later found murdered and Claire is unable to save her or the baby, the medic is charged with her death.

Fortunately, Tom steps in and confesses to killing Malva to protect Claire. He also tells Claire he was in love with her.

Troubled by his confession, Claire leaves Tom believing he will be hanged but it seems he ends up serving governor Josiah Martin before working as a teacher.

He later reunites with Claire in An Echo in the Bone and reaffirms his love for her and will “have no peace while she is alive”.

Tom adds he doesn’t regret what he did before kissing her and leaving.

Ahead of the Christie’s arrival on Fraser’s Ridge, fans have guessed Tom and Claire may act on his feelings in a shake-up to the storyline.

Posting on Reddit, one fan wrote: “When I read ABOSAA for the first time, I did not at all realise that Tom was falling in love with Claire, until Jamie mentions it in his inner monologue while on the way to New Bern.

“On the second read now, and I do see so many subtle signs, in the description of Tom’s body language when he’s conversing with Claire, some very rom-com like happenstances (stumbling down and heads colliding lol), the sheer number of times he’s caught just staring at her etc.

“Either I am reading too much between the lines now that I know what I know or I totally missed it the first time around because there was just so much happening or because I probably speed read.”

They added: “I am so looking forward to seeing how they play this in the series.”

Fans responded sharing their own thoughts on how the storyline could play out.

“I thought he was wary of Claire more than anything else,” one wrote.

“And he was starting to feel respect towards her, and then his relationship with Jamie is so conflicted, and probably that was also weighing on what he felt for Claire.

“And like you said she brings up memories of his wife, with the book burning and all, so there was that. I thought a lot of things, but this I didn’t think that at all.”

Another commented: “I did not see that coming at all! Like you said, going back to the interactions between Claire and Tom, I can see the little things hinting towards it.

“I liked this twist, because Jamie has never had to deal with someone being in love with Claire.

“Granted there is the whole Frank situation, but Frank is almost like a memory, not a physically present person.

“People have been attracted to Claire, but never properly in love with Claire. Whereas she has dealt with multiple people in love with Jamie and having to navigate the situations it’s caused.”

Outlander seasons 1-4 are available to watch on Starz and Amazon Prime Video now.