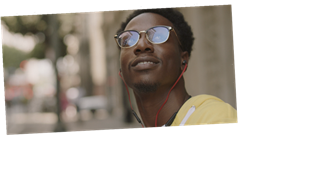 As usual, the Oscar contenders for live-action short include a range of social issue films, addressing topics from police brutality to disability. This year’s nominees employ a lighter touch than in years past, addressing weighty topics with an accessible levity and emphasizing shared humanity. Voters will likely be able to better appreciate the ambitious subject matter when handled with a — albeit respectful — sense of humor.

Inspired by the George Floyd protests, rapper Joey Bada$$ stars in “Two Distant Strangers,” which refocuses attention to police brutality and the BLM movement through a “Groundhog Day” inspired storyline. The high-concept 30-minute film marks the first narrative written and directed by comedian and “The Daily Show” writer Travon Free, and counts Sean “Diddy” Combs, Adam McKay, and NBA star Kevin Durant as producers. Free applies a satirical lens to the dark scenario, but very deliberately doesn’t let anyone off the hook.

Doug Roland’s heartfelt “Feeling Through” is the first film to feature a DeafBlind actor, and is anchored by two impressive performances from newcomers. The film is a coming-of-age story about houseless teen Tereek (Steven Prescod) who encounters DeafBlind man Artie (Robert Tarango) one late night in New York City. As Tereek reluctantly helps Artie find the right bus to take him home, the two forge an unlikely bond in their shared hour of need. In addition to wielding a light touch on a potentially weighty topic, “Feeling Through” comes equipped with Oscar bona fides; it’s executive produced by Marlee Matlin, an Oscar winner and longtime advocate for the disabled and hearing impaired.

Netflix’s only short in the live-action category, “The Present” follows a Palestinian man and his young daughter as they set out for an errand in the West Bank, and the various obstacles they must face between soldiers, segregated roads, and checkpoints. It is directed by Palestinian-British filmmaker Farah Nabulsi and stars famed Palestinian actor Saleh Bakri (“The Band’s Visit”).

Produced by and starring Oscar Isaac, “The Letter Room” centers on a prison officer who becomes involved in an inmate’s affairs. Alia Shawkat also stars in the film, which is directed by Danish screenwriter (and Isaac’s spouse) Elvira Lind.

Set in Tel Aviv and shot entirely in one take, “White Eye” revolves around a stolen bicycle and examines the lives of African migrants in the country, addressing the long brushed over topic of anti-Black racism in Israel.

The 93rd Oscars will be held on Sunday, April 25, 2021, and will be televised live on ABC and in more than 225 countries and territories worldwide.