KATHERINE JENKINS was on holiday in New York with her family last February when David Beckham unwittingly turned her life upside down – and not for the first time.

The footballer, with whom the opera superstar had previously been forced to deny an affair, had slammed her in a nasty email that emerged on the internet as part of the Beckileaks scandal. 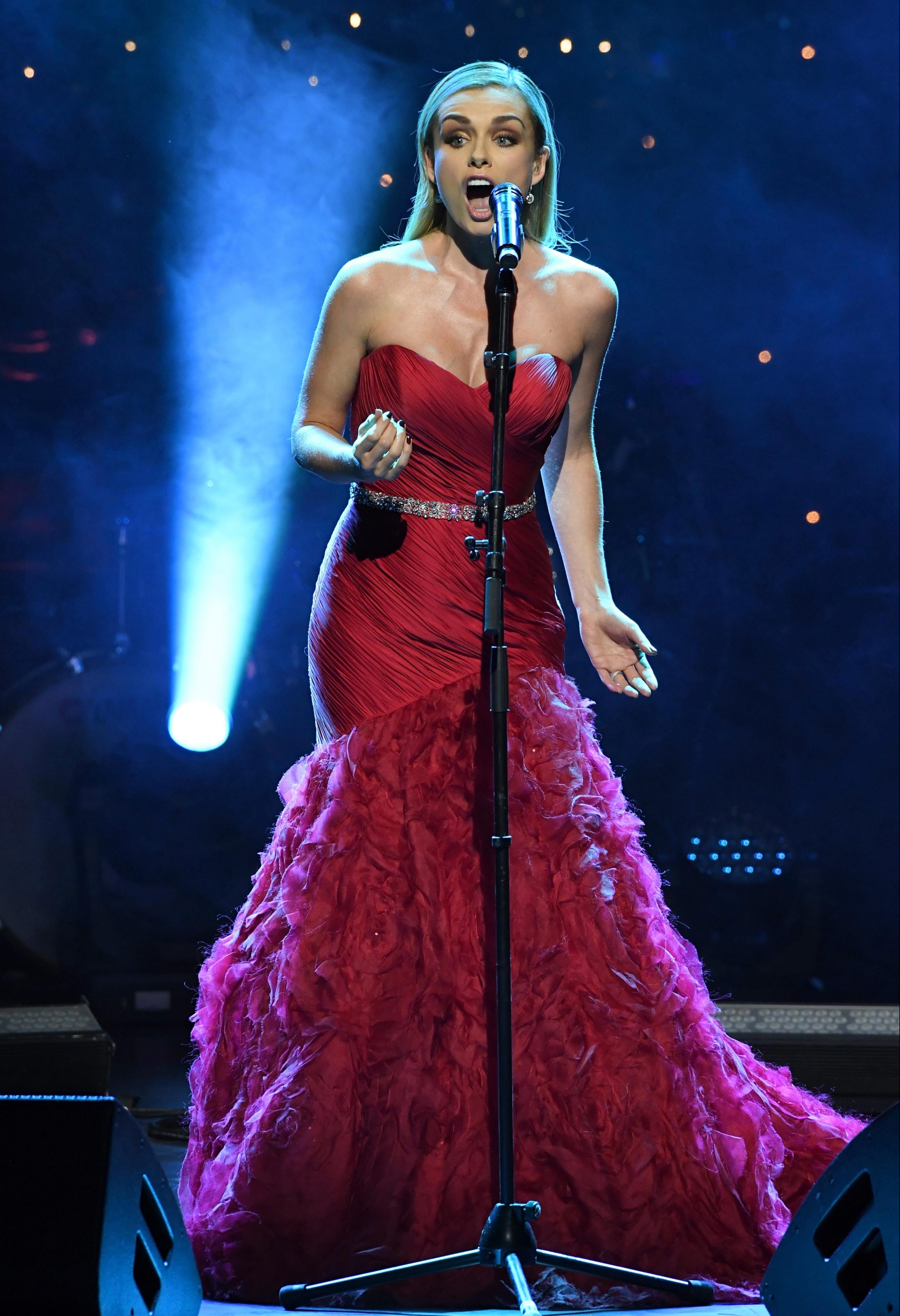 Beckham — seething from being overlooked for an honour himself — wrote to an adviser: “Katherine Jenkins OBE for what? Singing at the rugby and going to see the troops plus taking coke. F***ing joke.”

The Welsh singer physically bristles during the latest episode of my podcast The Dan Wootton Interview when I remind her of the ex-footballer’s words — but for the first time she is prepared to reveal her hurt and anger over his comments and the classless lack of an apology. 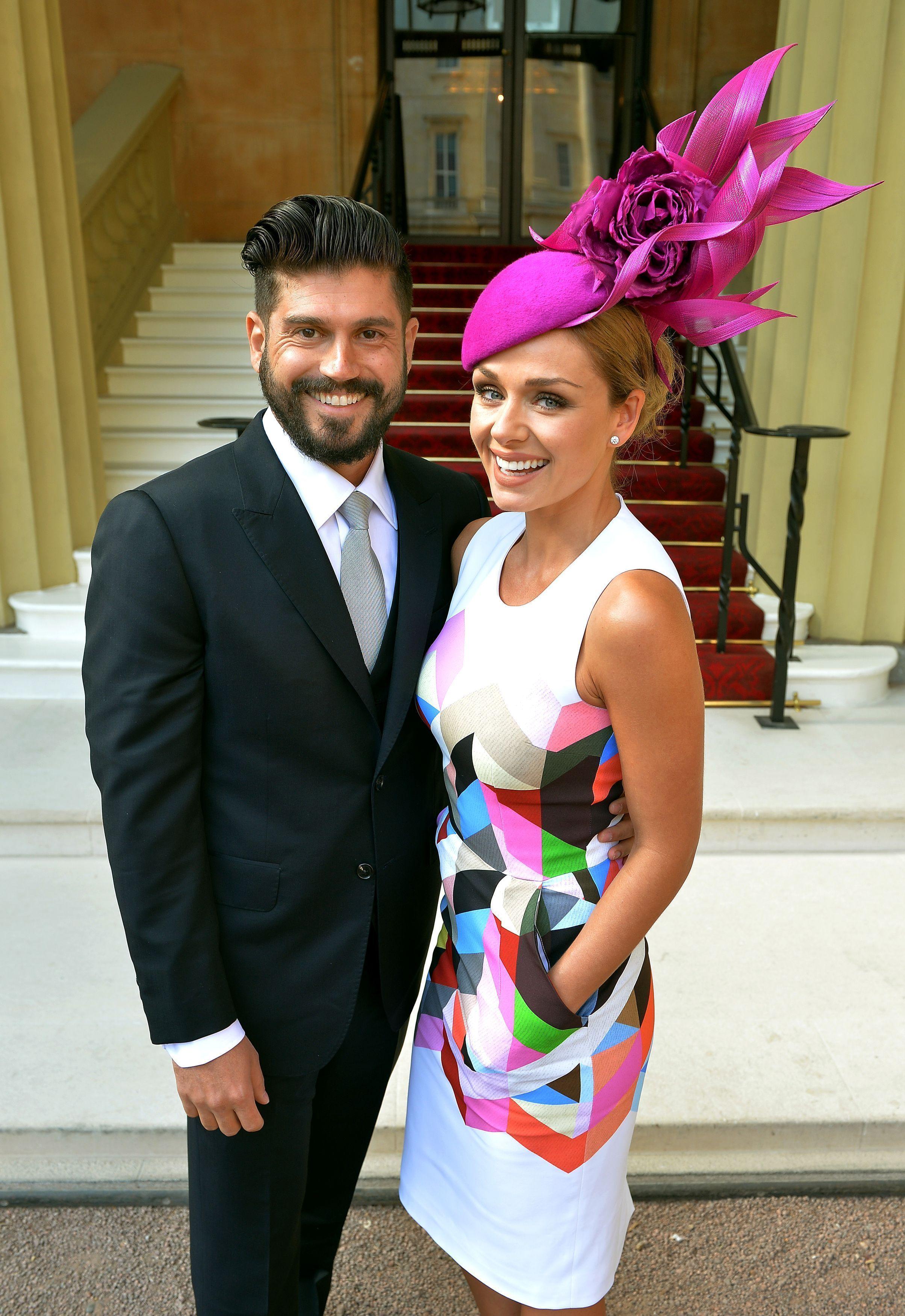 She says: “You’re just minding your own business and you get caught up in this massive storm. You just think, ‘Aw, I wasn’t doing anything’. To get caught up in that wasn’t pleasant. I don’t know why, again, that was aimed at me.”

Rightly, Katherine, 38, is proud of her honour, presented to her at Buckingham Palace in 2014, after flying to war zones to entertain troops and fundraising for a range of charitable causes she’s passionate about.

She explains: “I also don’t feel the need to defend this, by the way. I know what I’ve done and when I got the OBE it was given to me for music, and for charity”.

Was she angry with Beckham? “It’s obviously disappointing. I’ve never heard anything from them about it.”

What? He hasn’t even apologised? She shakes her head and says sadly: “No.”

Has she reached out to him? “No, honestly Dan, it doesn’t matter. Priorities are my kids, my family, my singing, my charities and that’s just, white noise in the background.” 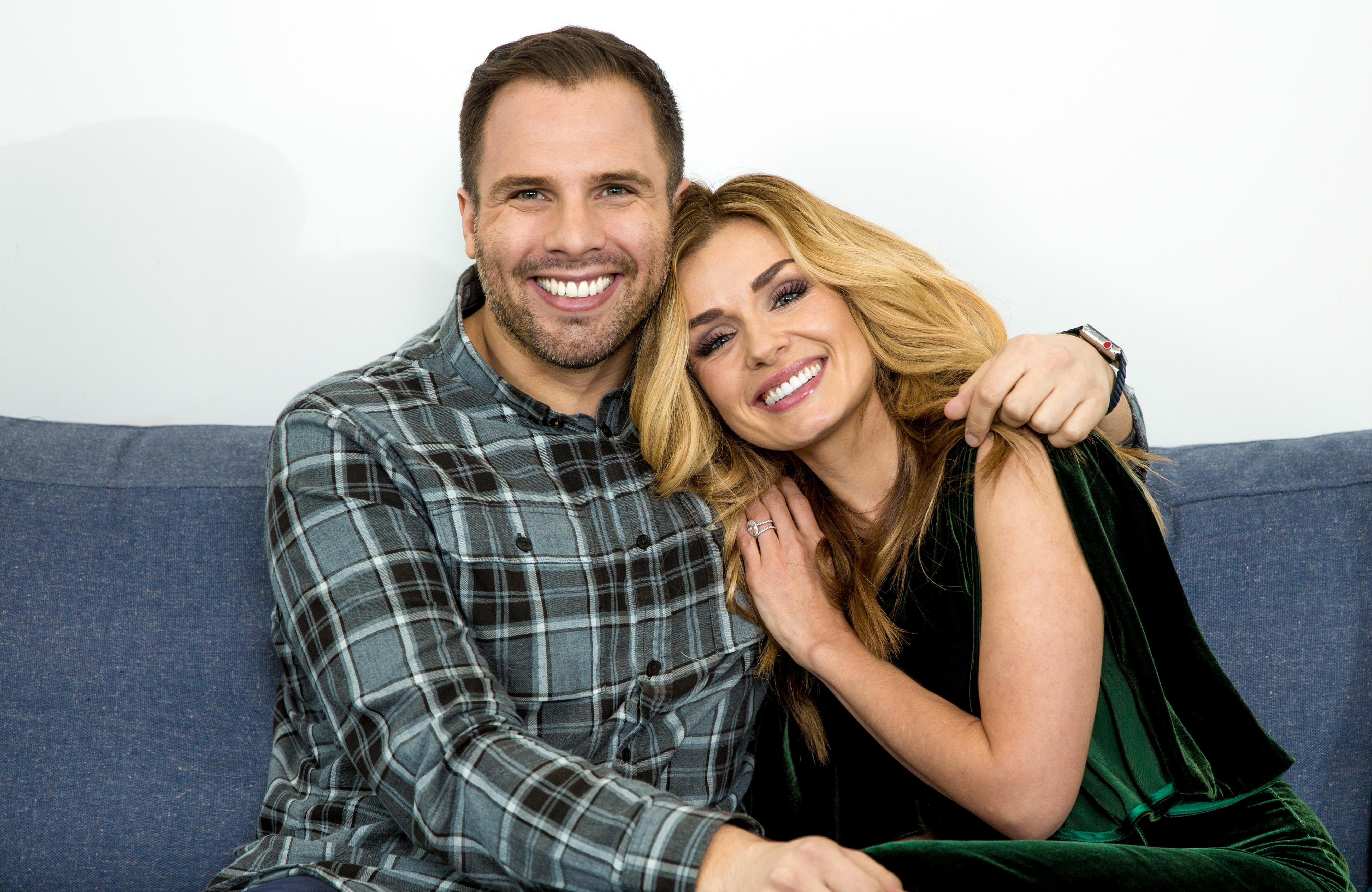 Having known Katherine for some time, it’s clear to me she was deeply stung by the criticism and the lack of any form of contrition from Beckham.

The pair’s troubles date back six years when Katherine was forced to publicly deny an affair with Victoria Beckham’s husband on Twitter, after being hounded by trolls for months.

She wrote: “Dear Twitter friends, I’ve read some horrible rumours on here & want u 2 know I absolutely deny I’ve had an affair with David Beckham. The rumours are very hurtful, untrue & my lawyers tell me actionable.”

Beckham, 43, was believed to have been furious with Katherine’s decision to go public with her denial but she knows it was the right thing to do. 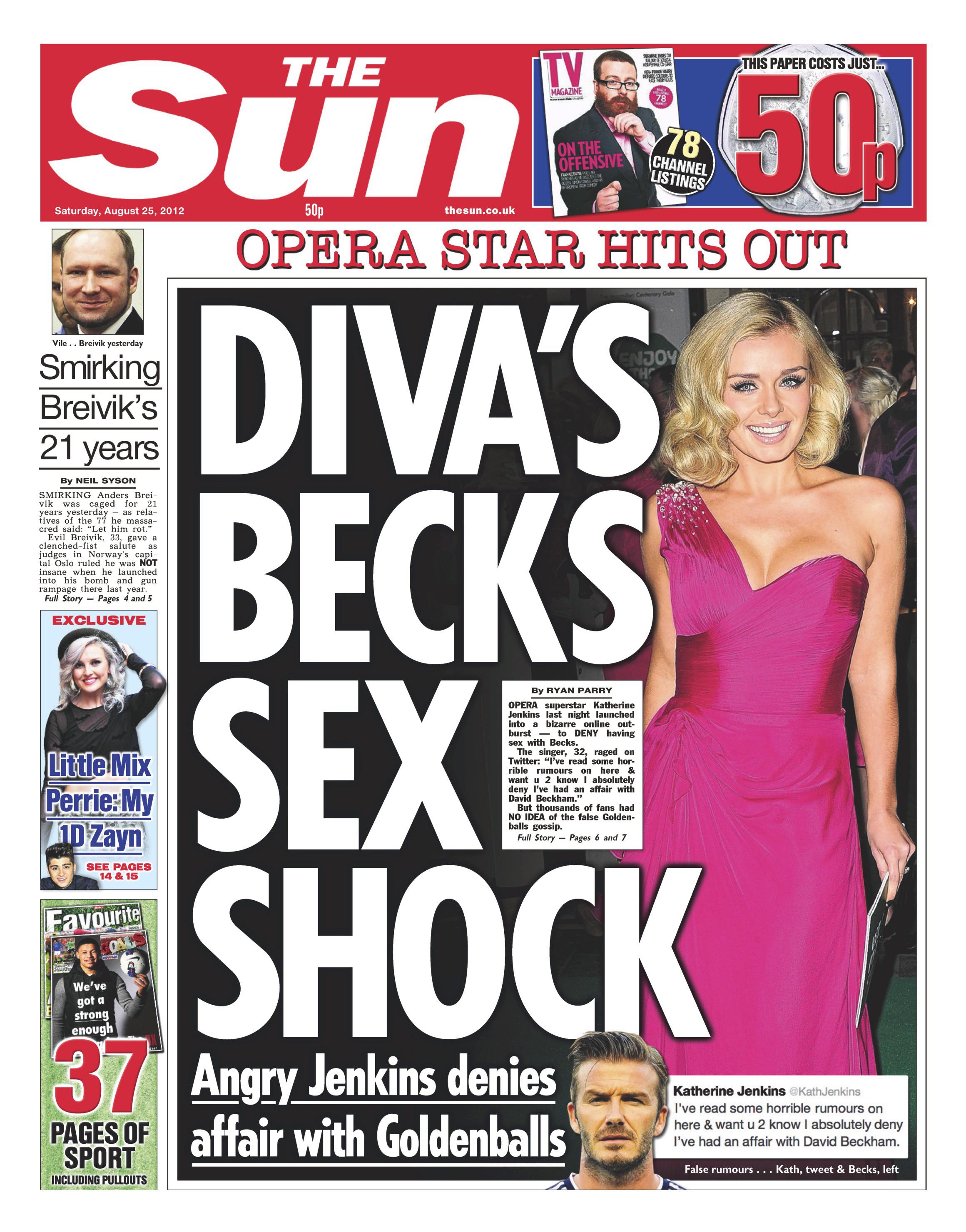 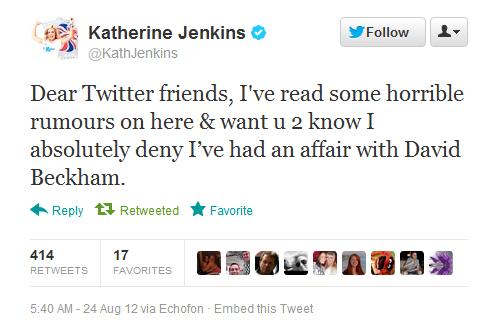 She says: “I’ve met him before but it was one of those things. The negative of social media is that some things can be written that are not true and it’s like Chinese whispers and suddenly, you know . . .

As if to make the point, Katherine gazes at her seven-month-old son Xander, peacefully sleeping in his car seat at her feet, for whom she has written a beautiful track on her new album Guiding Light.

The mezzo soprano with the voice of an angel has always been one to wear her heart on her sleeve, with no fear about being open and honest about her past. 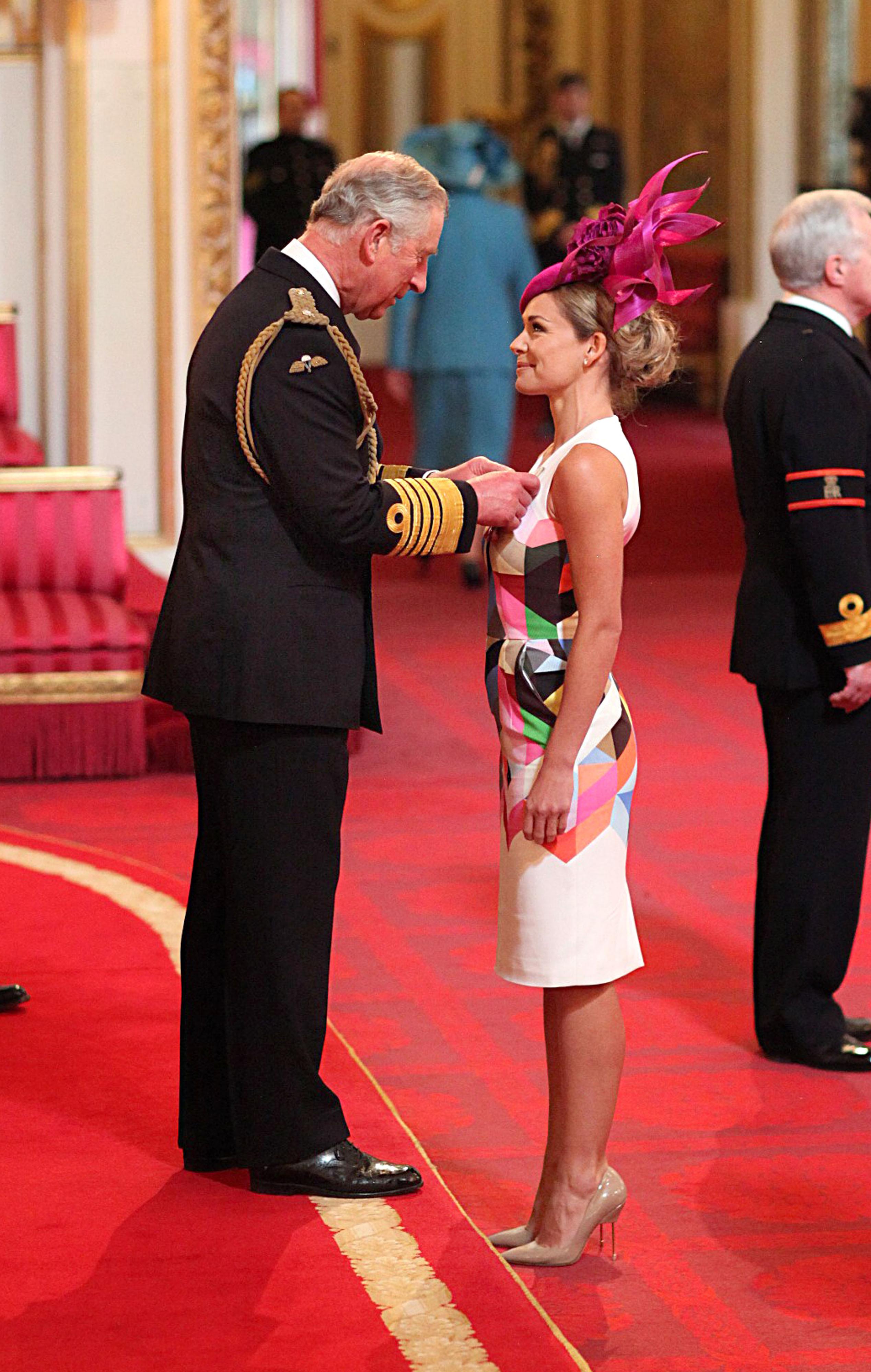 Beckham’s drug slur was over her decision a decade ago to admit to taking illegal drugs in the past, including cocaine, ecstasy and MDMA, until she was 23.

“I felt like I had to be honest, that was the thing,” she says proudly. “I look back and I think it was the right thing to do and I definitely don’t regret talking about it. I think it was something that needed to be addressed.”

But she stresses that her past drug use, which she defines as “not that much”, has been exaggerated.
She says horrified: “I remember being in America and somebody said, ‘So why did you go to rehab?’”

For her entire career, Katherine has also been dogged by suggestions she is a diva, with reports of extravagant demands, difficult behaviour and fallouts with co-stars such as tenor singer Alfie Boe, who recently defaced a picture of her with the C-word. 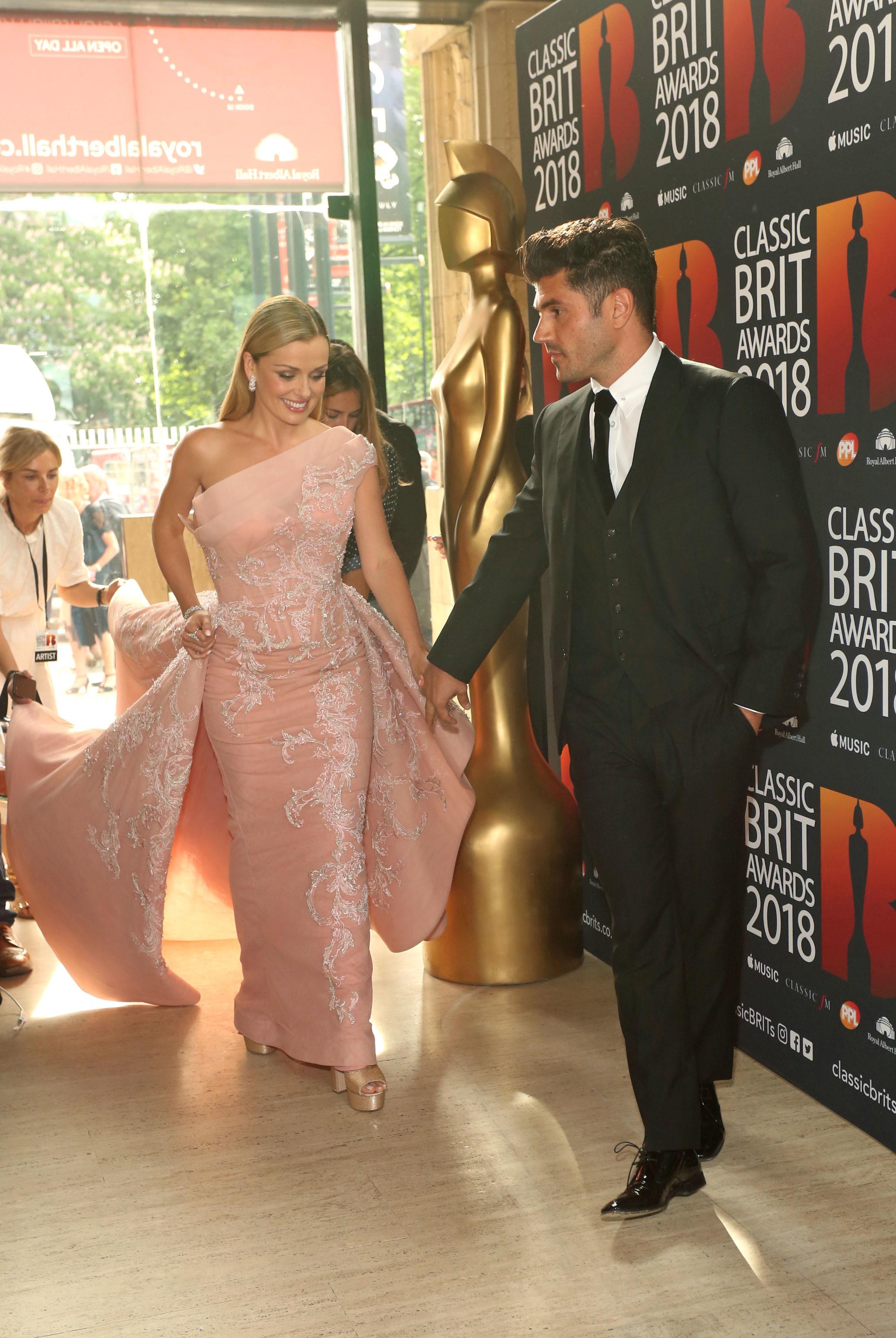 It’s something I’ve never understood. While she demands high professional standards, there has never been even the slightest hint of unpleasantness during the many hours I’ve spent with her around the world — and there are not many stars I can say that about.

“It is funny, isn’t it?” Katherine says. “I don’t know if it’s because of the type of music I sing that people expect that larger-than-life character and they want to imagine you’re a diva.

“I’ve read such crazy things about myself, where I’ve ordered six vegetarian meals at half an hour intervals and all this kind of stuff. 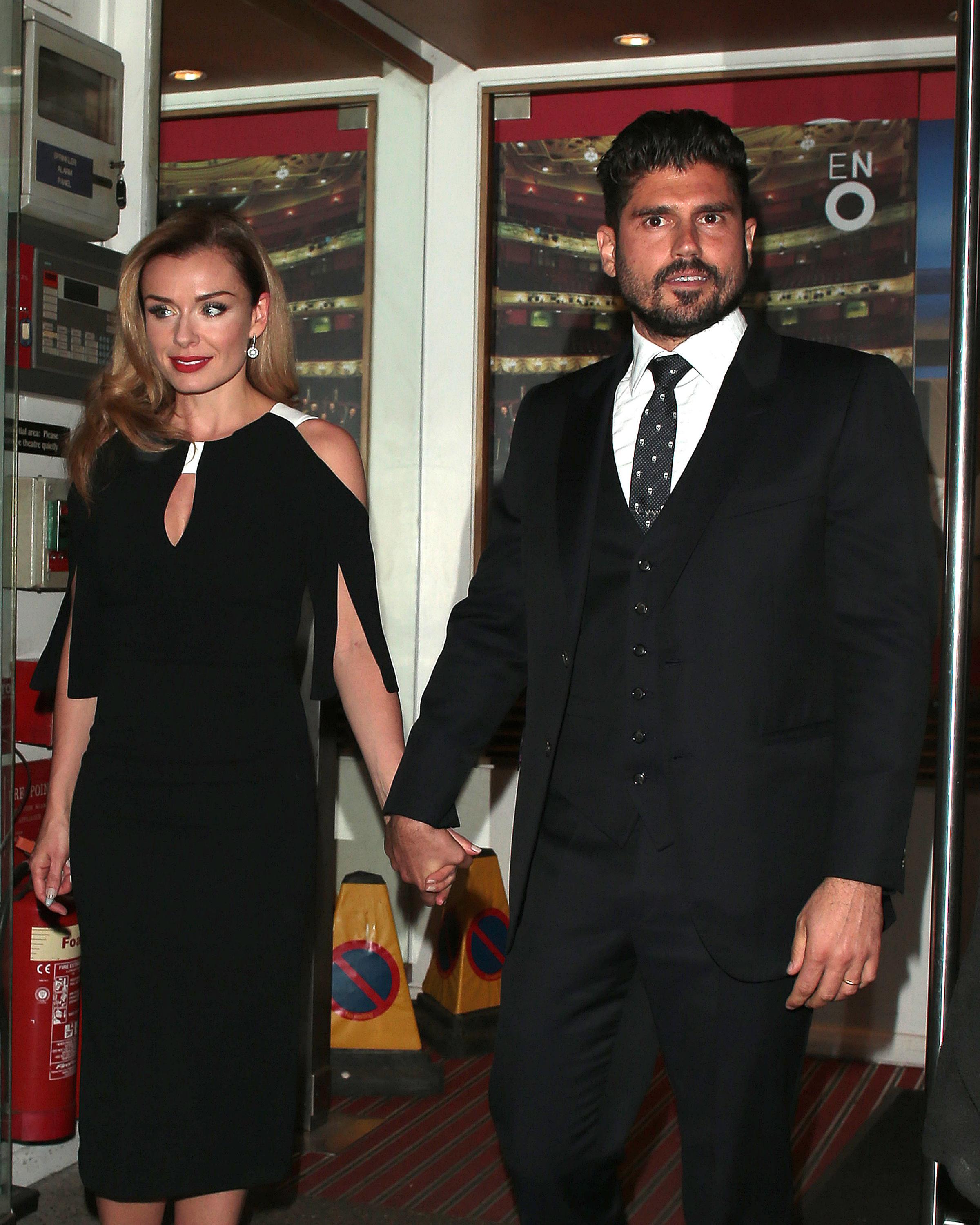 “Then often I almost find myself having to go the other way just to prove to people I’m not like that.”

Katherine describes herself as a “typical Cancerian” — she has a “strong outer shell” but is “soft on the inside”.

So she admits: “I find it so amusing sometimes and upsetting because it can be so far from the person you actually are.”

While crying discrimination is an over-used tactic among misbehaving celebs these days, I do wonder if the flack Katherine gets is somehow connected to sexism.

She responds: “That is something which I definitely think needs to be addressed. My counterparts in classical music, if the men are away touring or working then they’re talented. 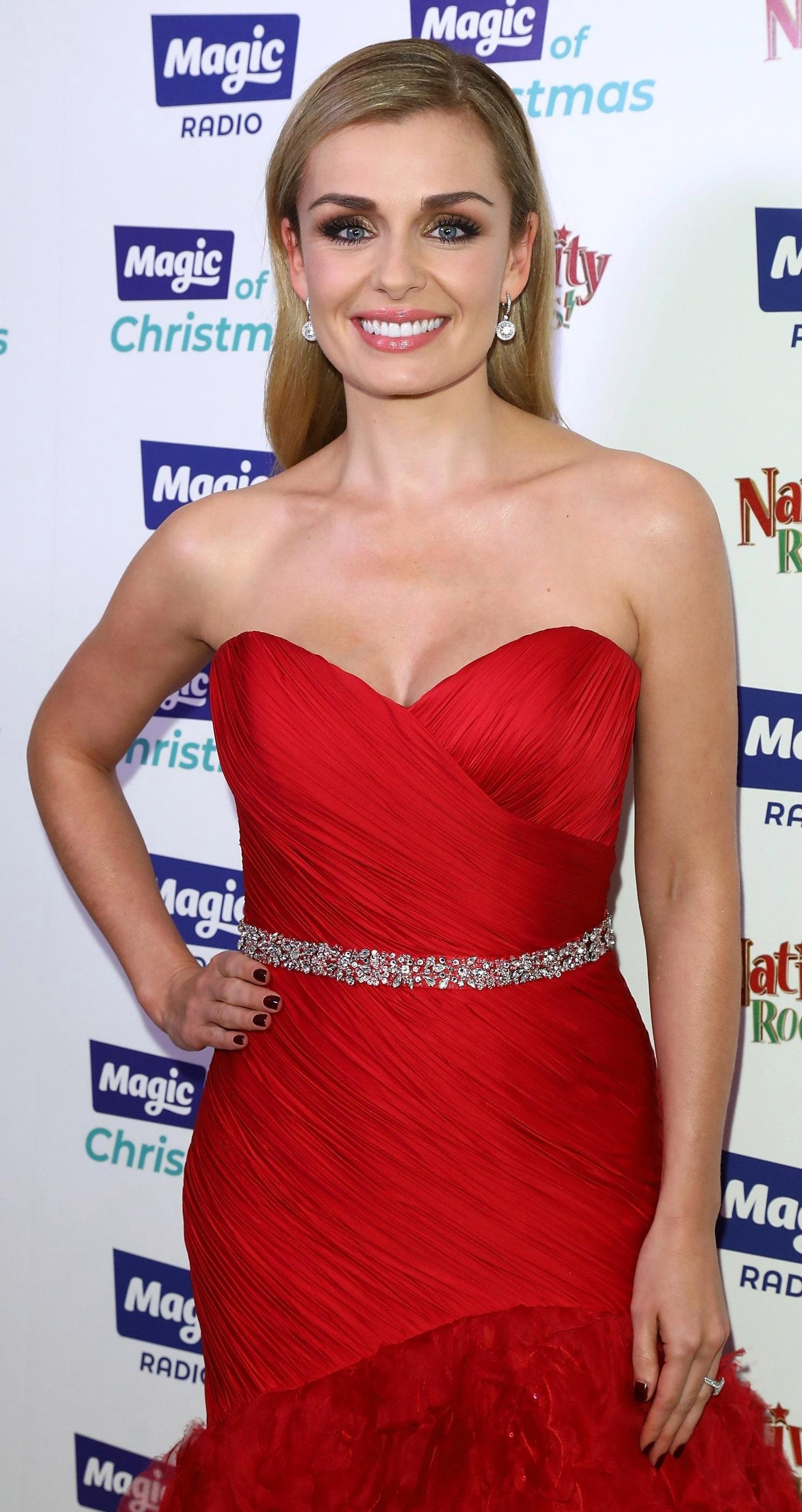 “If a female is doing it, as I was ten years ago, just a single girl going out and going on tour, you’re ambitious, and that’s negative.

“So it is interesting how we view men and women in any workplace, I think that applies to all forms of career, not just performers.”

Katherine has also spent the past few months thinking about the #MeToo movement after experiencing harassment herself, which she has never discussed before.

She explains: “I didn’t want to talk about it because when #MeToo happened and everybody was coming forward, I’d just had Xander. 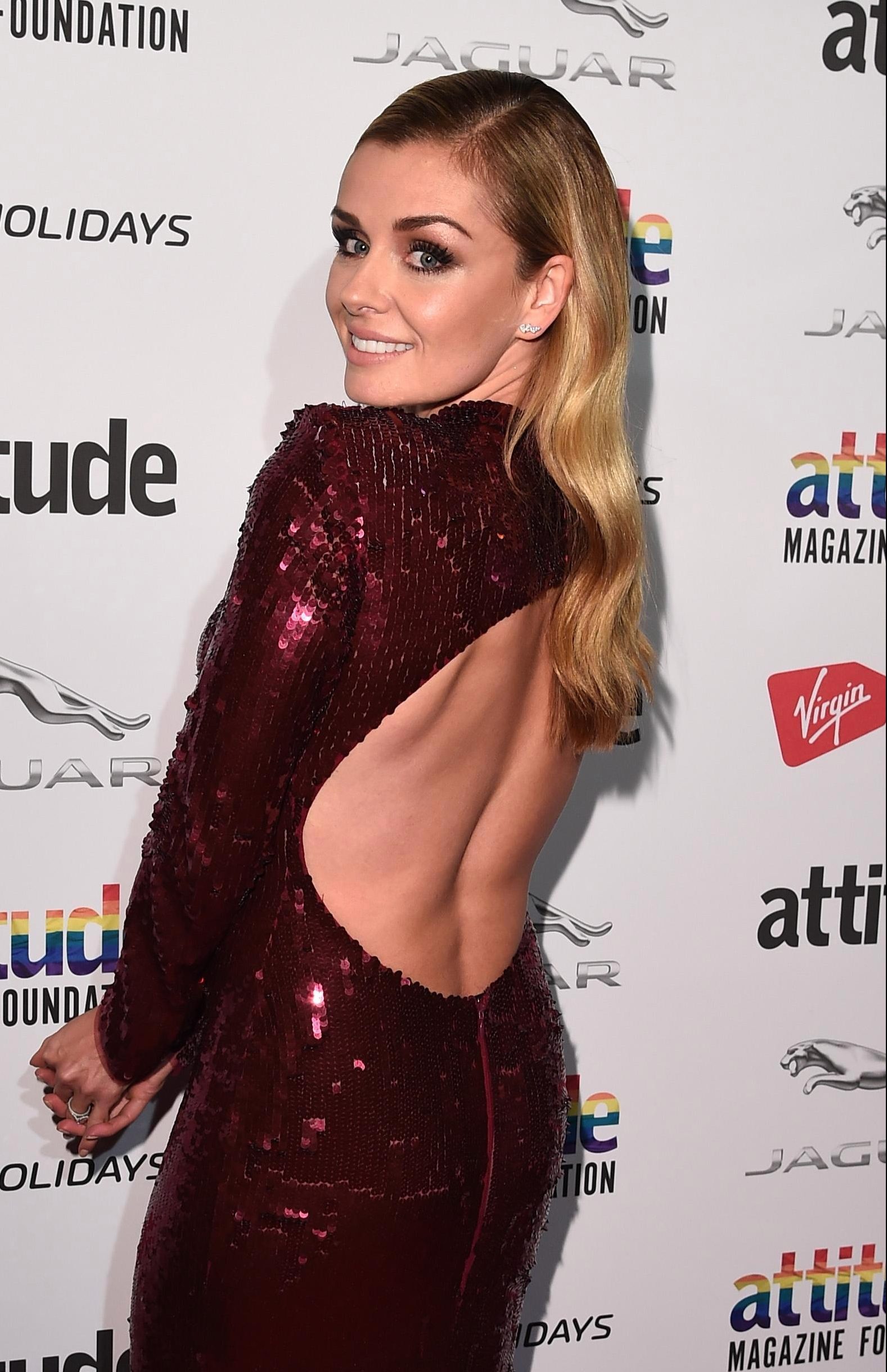 “I was in the bubble of that and didn’t want any of the attention on that kind of thing.”

But speaking of her situation for the first time, Katherine reveals that the male executive in question, who she will not name, did not work in classical music but another part of the media.

How did she cope? “Just get on with it, don’t you? I mean that’s my attitude to a lot of things.

“I’m Welsh and we sort of just get on with it and process it at some point. It wasn’t a terrible, terrible one. I can identify with what some of the people were sharing.”

Katherine adds: “I’m actually grateful that the situation I was in, I didn’t actually need that person. I was already having my career, so I already felt very strong and empowered and on my own path. 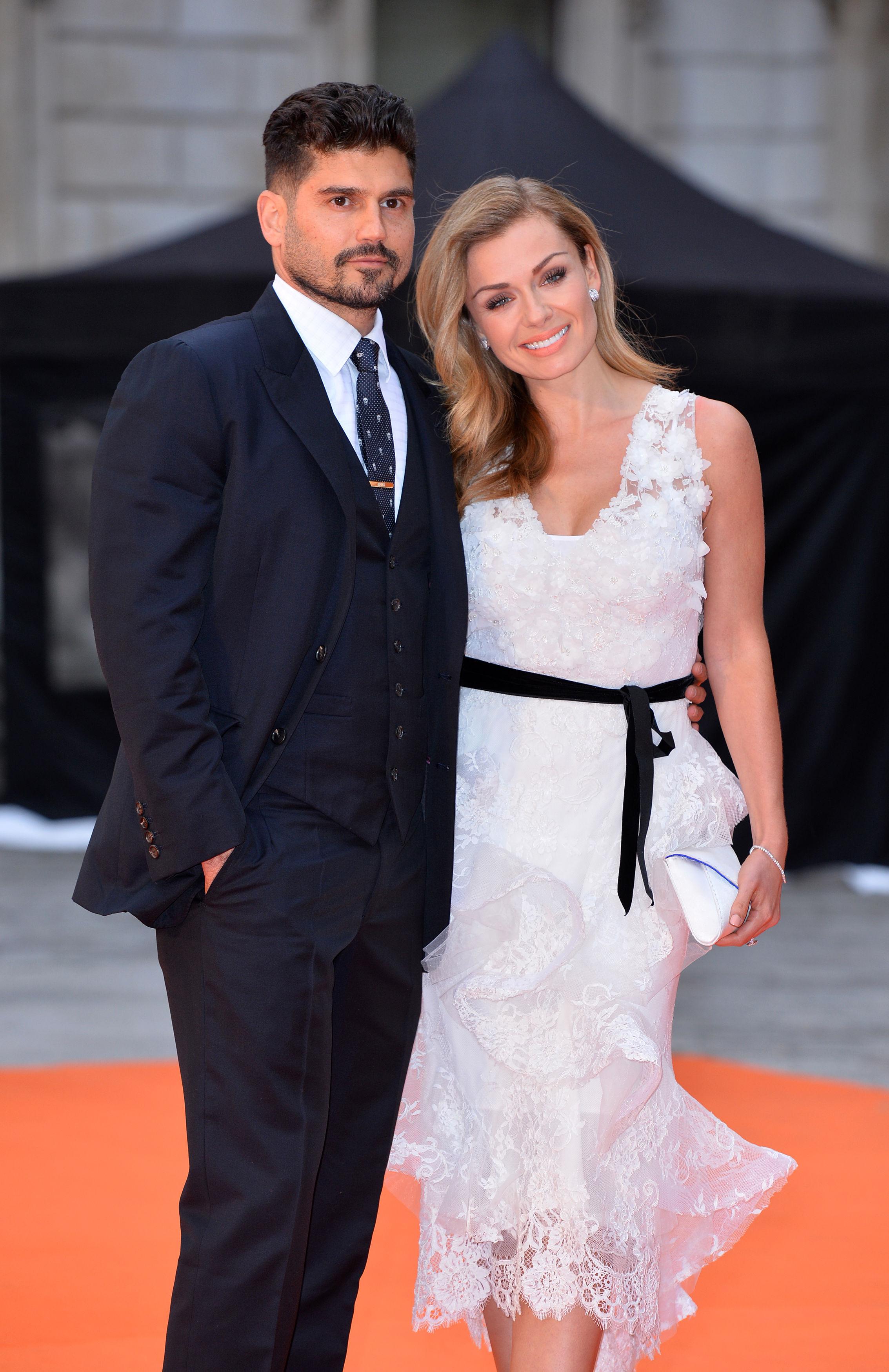 “But that’s why I can see how, for somebody who’s just starting, who doesn’t know the industry, it must have been really intimidating. So I’m thankful I was a little bit older and knew how to handle it.”

Does she have to encounter her harasser today?

“No. So that’s good, thank goodness.”

Katherine has an added glow since becoming a mum — she is doting and brought Xander to our interview because she hates spending time away from him.

It’s also changed how she looks at her music — for the better. She recorded the entire album with her baby son in the studio. 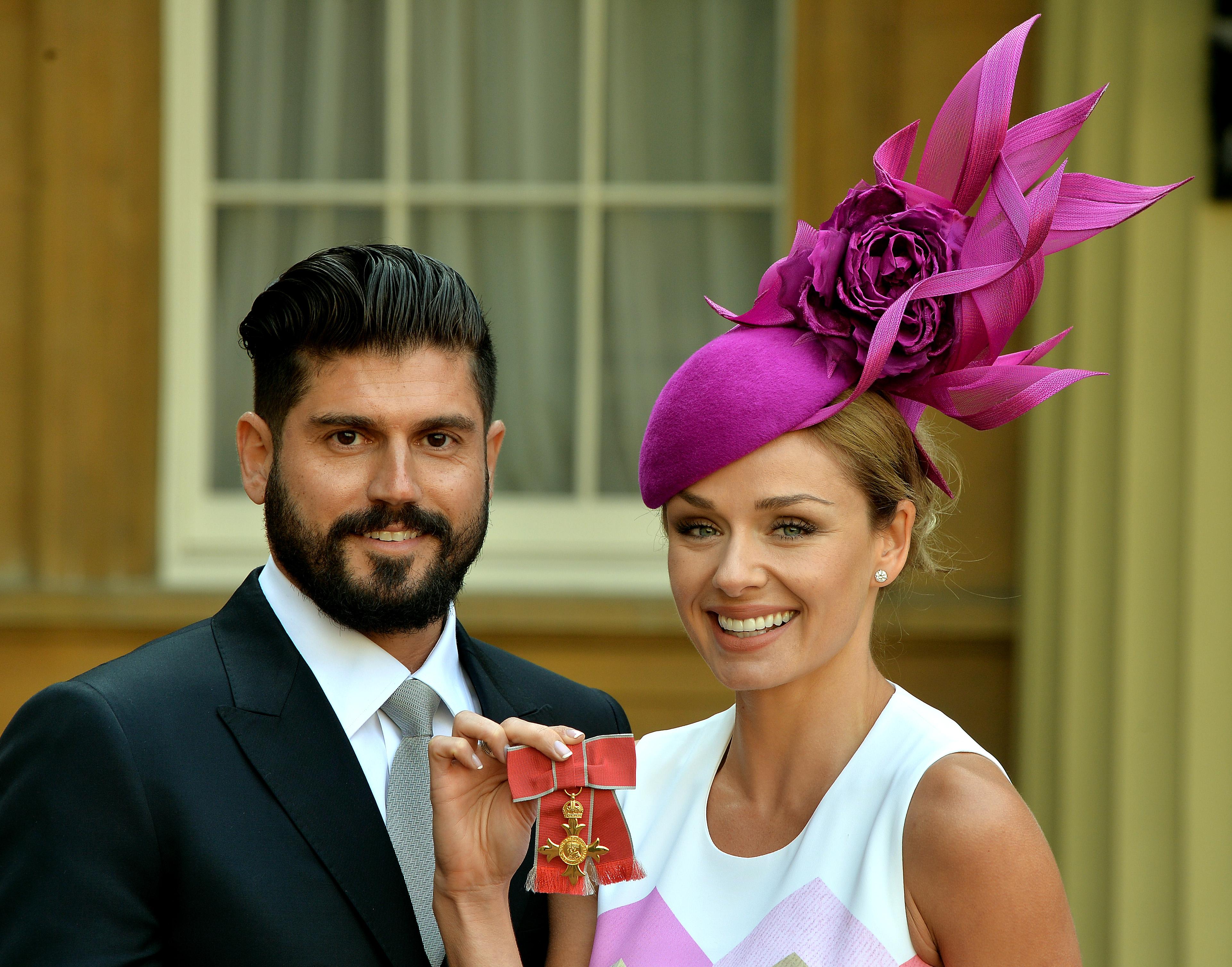 She says: “I do think being a mum now has chilled me out. Definitely softened me. And I think that’s why this album wasn’t about how loud I can sing and all the high notes I can hit.”

Katherine, whose father died of cancer when she was only 15, made serious changes to her life after meeting husband Andrew Levitas, 41.

She explains: “There was a time definitely around 2011 I was on a plane every single day. I think it’s just you meet the right person and your priorities totally change.”

As for her three-year-old daughter Aaliyah, Katherine smiles then says: “She’s made me more patient, more understanding, having more compassion for others. It’s made me a better version of myself.” 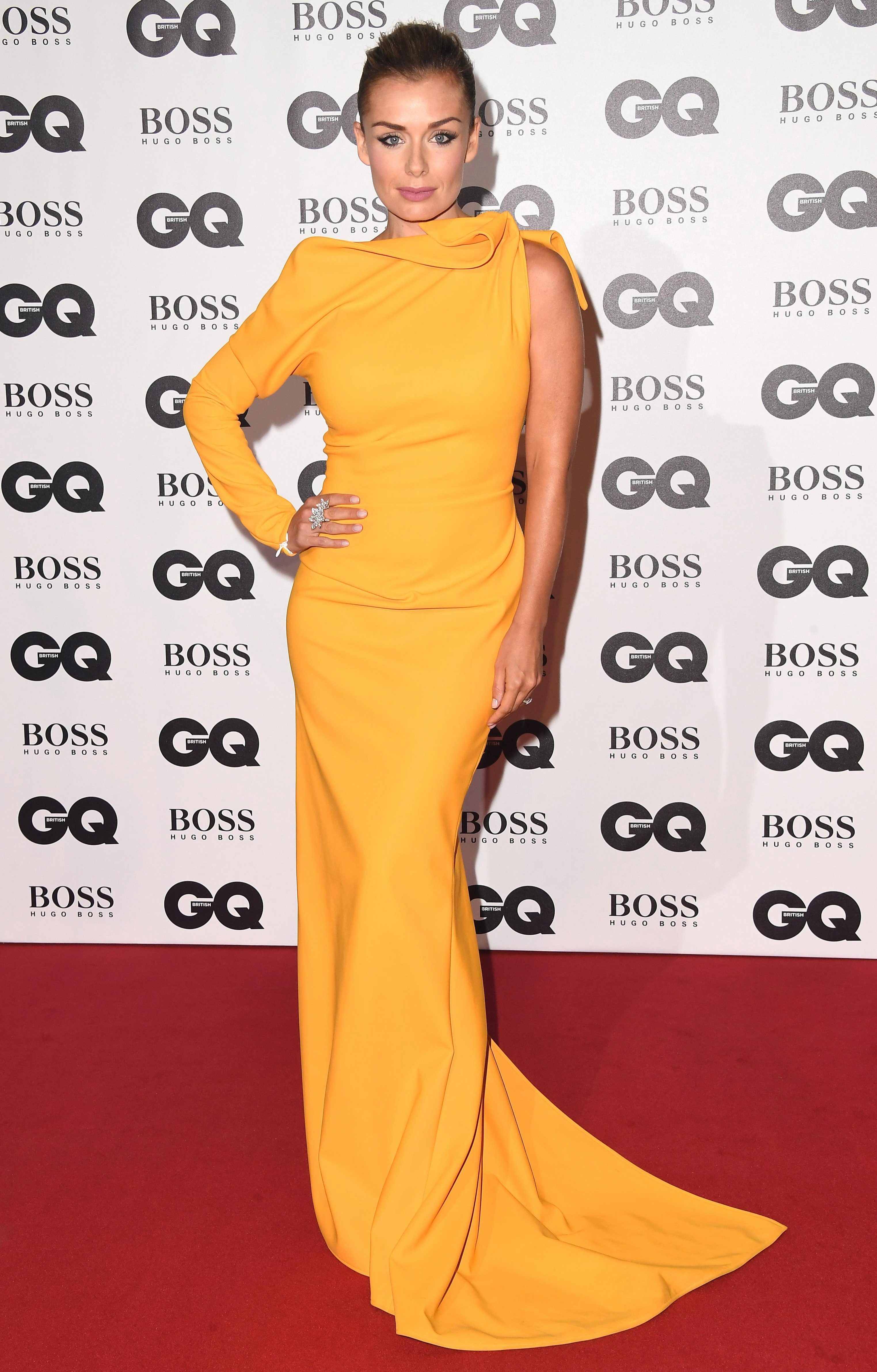 She is currently very torn about whether to return to a war zone and perform next year, something she did regularly before starting a family.

She says: “It’s such a difficult one. I have had two invitations to go to scary places and the selfish part of me is like, ‘Yes, I absolutely want to go’. But the children are really small and it is dangerous.”

As for her husband Andrew’s role in the decision, she says: “He’s so proud of the times I’ve already gone and he knows I’m headstrong, actually this one’s more heartstrong.”

I have very little doubt that Katherine will be getting on the plane to the war zone — more proof for David Beckham of exactly why she was awarded that OBE.