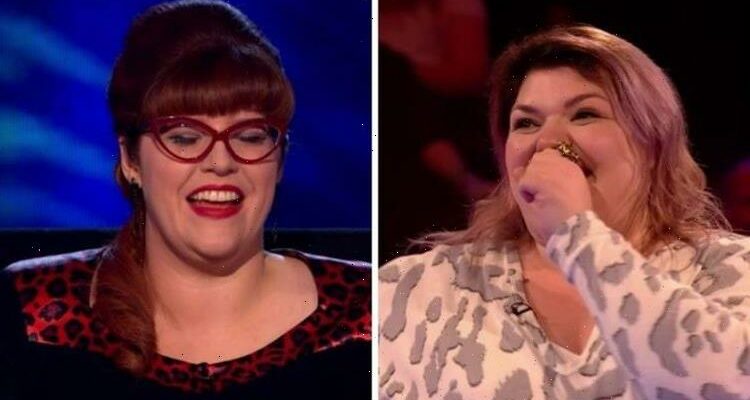 Host Bradley Walsh welcomed Veronica – nicknamed V – onto Beat The Chasers as he offered her the chance to take on Darragh Ennis, Jenny Ryan, Mark Labbett, Anne Hegerty, Paul Sinha and Shaun Wallace to win a cash prize. The contestant chose to play three chasers for £20,000 and luckily walked home with the money, leaving the chasers dumfounded.

After a strong start, V told Bradley and the chasers if she won money on the show she would like to spend it going to Super Nintendo World in Japan.

She quipped: “I got married in Las Vegas a few years ago and I would like to get a divorce from that, so that would be good too.”

Mark ‘The Beast’ Labbett burst into laughter while Bradley found himself lost for words and shook his head.

V stampeded through her questions and jumped for joy when she realised she had beaten the chasers with more than half a minute to spare.

“Oh my god,” she said when Bradley announced she had defeated the quizzers.

While clapping V for her triumphant win Jenny ‘The Vixen’ Ryan told the other chasers they were “never really in the game”.

An amazed Bradley said: “[There were] 32 seconds left on the clock.”

V beamed: “That was alright, can we do that again? That was really fun. Look at that, thank you.”

The host asked the chasers what they thought about V’s win, with The Vixen replying: “There was absolutely nothing we could do when you come along and you’ve got your tactics and you have studied which offer to go for.

“You have worked out everything beautifully.”

“£20,000, go and do your stuff Veronica you have beaten the chasers. Well done,” Bradley added. “I thought that was brilliant.”

Viewers congratulated V for her brilliant win on Twitter, with Jack Nelligan saying: “Loved this week’s episode of #BeatTheChasers well done to V for taking back £20,000. [You] made it look very easy with 32 seconds left on the clock.”

Sam Joyson-Cardy added: “Watching #BeatTheChasers on catch up and it’s made me want to go back and have a proper go at it. Made me realise how much I’ve missed quizzing during my unintended break.”

“Another decent episode of Beat the Chasers. Well done V,” another user added.

V was the only contestant on Saturday night’s episode to beat the quiz masters.

Last week, contestant Robyn brought home an astounding £40,000 after she defeated the chasers.

Her win after a tense final against four chasers left Bradley and viewers stunned.

Beat The Chasers continues on ITV on Saturday at 9pm.