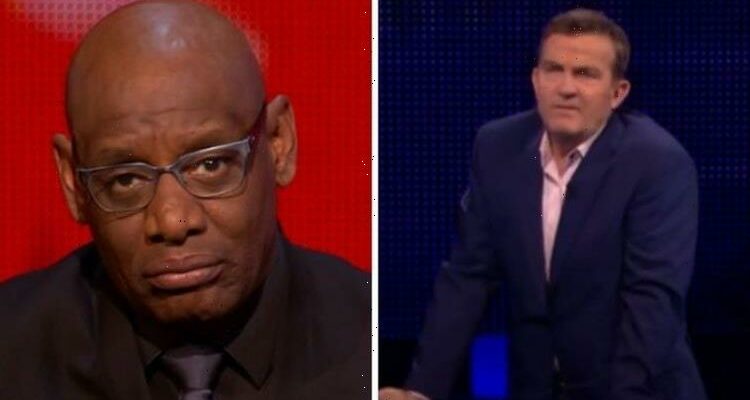 The Chase: Bradley hits back at Shaun's remark to guest

Shelagh was the first to face The Chaser as she appeared on Friday’s episode of the hit ITV quiz show, presented by Bradley Walsh. The Chase favourite Shaun Wallace was quick to suggest that she wouldn’t last long after she won £4,000 on the cash builder round, but Bradley, 61, scolded The Dark Destroyer for his jibe, commenting there was “no need” for the remark.

Shelagh confessed she was nervous to be the first up as Bradley chatted to her ahead of the cash builder.

He asked her: “If you were to win some money today, what would you do with it?”

Shelagh seemed to have given this some thought, answering: “Well, I’ve seen this three-carat diamond in a beautiful shop in Manchester, so I quite fancy that on my finger.”

Bradley gawped at the 64-year-old before responding: “Well, good luck with that.”

She had already told Bradley her husband was called Martin, and he tried to brush off the blunder.

He responded: “I don’t know. What’s your husband’s name?”

“Martin!” Shelagh laughed. He pressed on: “Well, what does Martin say about it?”

“He’s just recovering from the fright of having to buy it himself,” the dance teacher smiled.

She went on to answer four questions correctly, securing her £4,000 if she could defeat the Chaser.

When this was revealed to be Shaun, he commented: “Hello Shelagh. Diamonds are forever, but you’ll only be here for five minutes.”

Bradley puled a face, adding: “There’s no need for that.”

Unfortunately, despite a promising performance, Shelagh didn’t manage to beat the Chaser, and was caught by Shaun.

This meant she had to leave her teammates with just three contestants.

Norman, Daniel and Holly were left to take on Shaun in the hopes of battling him in the Final Chase.

Unfortunately, Holly didn’t manage to get through the first round either, leaving Daniel and Norman to play on.

Shaun also aimed a jibe at him, saying: “Seems a shame to catch a Middlesbrough fan, you’ve suffered enough already, but I’m going to.”

Daniel won £7,000 in his cash builder, which Bradley said was a “great” amount.

Norman advised him to stick to the amount, commenting: “I need you back here.”