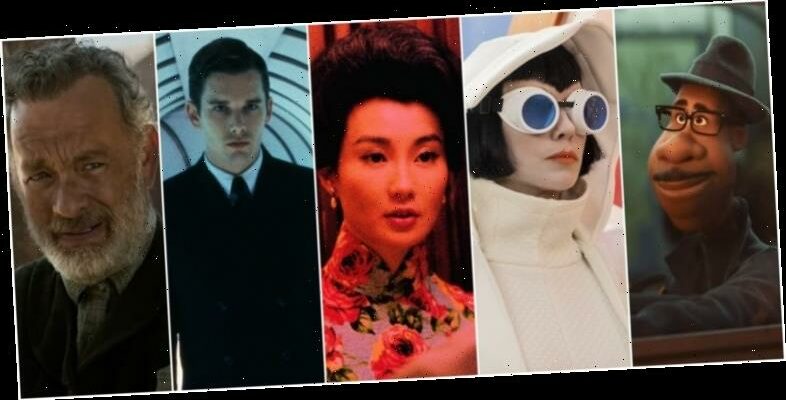 The time has come yet again to highlight some great physical media, and this edition is our most jam-packed in a while. It’s so jam-packed it might as well be jelly. You have the wonderful new Criterion box set World of Wong Kari Wai; the delightfully silly Barb and Star Go to Vista Del Mar, Pixar’s Soul, new 4K releases of both Godzilla and Gattaca, Tom Hanks in News of the World, and the horror film The Reckoning.

Few filmmakers, if any, capture the feeling of yearning as well as Wong Kar Wai. The Hong Kong filmmaker crafts lush, gorgeous, and often heartbreaking stories about the often elusive romances of hopeless romantics. The Criterion Collection has put together a stunning box set featuring the filmmaker’s finest work – his feature debut As Tears Go By, his 1990 film Days of Being Wild, his breakout movie Chungking Express, which introduced him to an even bigger audience; Fallen Angels; Happy Together; his masterpiece In the Mood For Love, and its not-quite-sequel 2046. One of these films alone is remarkable – but put them all together and you have a set that calls to you. It will have you sighing, and swooning, and marveling at the pure filmmaking craft on display.

There’s been some controversy over the color correction on some of the titles – many of the film shave a greenish hue that has upset more than a few movie-lovers. But it’s worth noting that the new digital restorations here were all approved by Wong Kar Wai, and I think we can trust his vision since he made the damn movies. If there is a complaint to be had here it’s Criterion’s packaging choice – this isn’t the size of a normal Blu-ray or Blu-ray box set; it’s much taller. This is a minor quibble and I feel silly even complaining about it, but I personally would’ve preferred a more common shape for the release. Beyond that, though – perfection.

You can’t rent this one, so your only choices are really to buy or skip – or maybe wait for all the remastered titles to show up on the Criterion Channel. But this is a must-own. Aside from the frustrating box shape (this isn’t going to fit on a normal Blu-ray shelf), the set is well-worth the purchase.

Barb and Star Go to Vista Del Mar feels like a cult classic in waiting. It is a film that’s committed to throwing off good vibes while being unrelentingly, unapologetically silly. The story – such as it is – follows lifelong friends Barb (Annie Mumolo) and Star (Kristen Wiig) as they embark on a vacation to Vista Del Mar, Florida. There they get caught up in a plot involving a supervillain (also played by Wiig) who wants to kill everyone in Vista Del Mar with killer bees. Also caught up in the mix: the villain’s henchman, played delightfully by a scene-stealing Jamie Dornan. The story is bunk, but that’s okay – it merely exists to hang a bunch of absurd, hysterical moments on.

Buy this immediately and pop it in any time you need a laugh. Barb and Star is destined to be one of those cult classics that you’ll want to revisit again and again; cinematic comfort food.

A kind of spiritual sequel to Inside Out, Pixar’s Soul is a slightly uneven but overall remarkable story of life, death, and everything else. Jamie Foxx voices Joe Gardner, a music teacher and wannabe jazz artist who ends up in the afterlife and then the place before life which is called the Great Before. Joe devises a plan to get back in his own body with the help of a soul named 22 (voiced by Tina Fey) who doesn’t want to go to Earth. These opening moments in the Great Before are visually inventive and fascinating, but it’s the second half of the film – where Joe and 22 end up on Earth with unexpected results – that Soul truly comes to life. This isn’t quite as good as Inside Out, but it has just enough raw, emotional power to awe you.

The argument could be, “Why buy this if I already have it on Disney+?” But honestly, you can’t go wrong with a physical copy – especially the 4K release. No matter how magnificent and miraculous streaming tech becomes, that physical look will always triumph. If you’re a fan of Soul, it’s well worth picking up on disc.