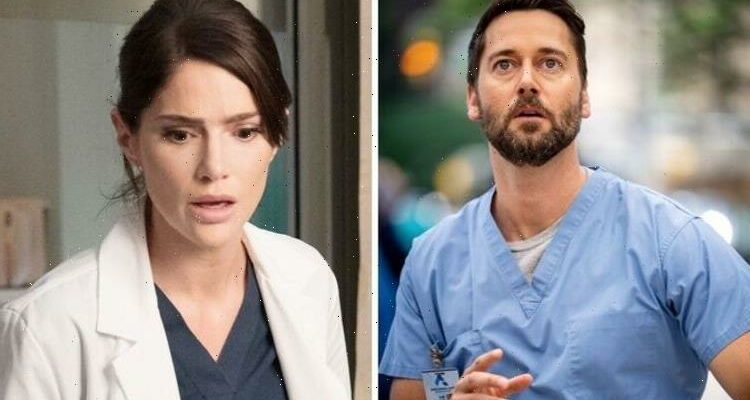 The 2021-2022 run of NBC’s popular medical drama has featured plenty of shocks and surprises, not least of which was the news the series would be coming to an end next year. With a tear-jerking conclusion to New Amsterdam just over the horizon, fans have been taking to Twitter as the 16th episode of season four has once again failed to air.

The fourth season of New Amsterdam is still on hiatus since the latest episode aired way back in February.

Episode 15, Two Doors, was released on the last Tuesday of the month and checked in with Dr Max Goodwin (played by Ryan Eggold) and the rest of the New Amsterdam staff.

Unfortunately, the show was taken off-air at the start of March to make way for the yearly State of the Union address in the US, and new episodes haven’t been seen since.

Sadly, NBC has confirmed the series won’t be back for another month and a half.

New episodes will begin again on Tuesday, April 19, and will hopefully continue on a weekly basis until the end of New Amsterdam’s current run.

This massive break can be explained with the arrival of a new limited series, The Thing About Pam, led by Renée Zellweger.

The network is reportedly keen to let the series run its course uninterrupted before returning to NBC’s regularly scheduled programming.

Of course, not all the show’s fans were happy about the latest unexpected interruption.

Twitter user JR wrote: “Not at all happy that @nbc will NOT be airing #NewAmsterdam tonight. In fact, will not be airing it again until April 19th.

“And don’t expect me to watch the new show you gave its time slot to either.”

“I miss New Amsterdam, this is taking too long,” Carol said, adding a crying emoji.

There were also complaints when fellow NBC drama This Is Us failed to produce a teaser trailer for New Amsterdam’s return during Tuesday night’s episode.

Ky exclaimed: “There’s literally no #NewAmsterdam promos during #ThisIsUs and that’s very upsetting for me!!”

“Put Max back in his old position, get rid of the new administrator who took his job, lose the new deaf doctor and you’ll get your audience back. Too many changes. DON’T CANCEL.”

And Denise Dreon-Watson fumed: “WHY??! This is one of the best shows on TV! Please don’t cancel #NewAmsterdam.”

The show’s cancellation was announced in the middle of March while season four still hadn’t aired a new episode for well over two weeks.

Thankfully, New Amsterdam has been given the chance to wrap up its ongoing storylines with a 13-episode fifth instalment, which will presumably premiere near the end of 2022.

Even so, the series still has millions of fans tuning in each week who will be distraught to see the series come to an end next year.

New Amsterdam season 4 continues Tuesday, April 19 on NBC in the USA. A UK release date has yet to be announced.