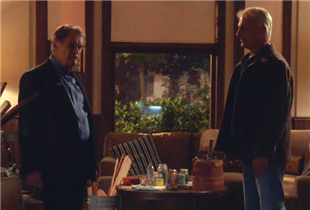 Ducky is back in tonight’s episode of CBS’ NCIS, and for good reason — he is worried about his longtime friend Jethro.

The Biggest NCIS Exits Ever, Ranked

When last we tuned in, Gibbs (played by Mark Harmon) had been led to Upstate New York by Paul Lemere, not to find the grave of the contract killer’s first victim, as promised, but instead so that Lemere could visit his late wife’s grave once more before stepping onto a land mine to die by suicide.

Gibbs, still determined to find out who was bankrolling the hit man, next invited McGee to pack a bag and join him on an excursion to Alaska, to look into the possibility that a megaconglomerate called Sonova had hired Lemere to “remove” any obstacles to an environment-damning copper mine it aims to build in The Last Frontier.

In the above clip from tonight’s episode, titled “Great Wide Open” and airing at 9/8c on CBS, Ducky (in series vet David McCallum’s first Season 19 appearance) catches Gibbs on his way out the door, to express his concern about all that Jethro has been through over the past six months — two major team exits and a near-death included.

Is Gibbs able to say what his old friend wants to hear? Press play above and find out.

Want scoop on Arrow, or for any other show? Email [email protected] and your question may be answered via Matt’s Inside Line.