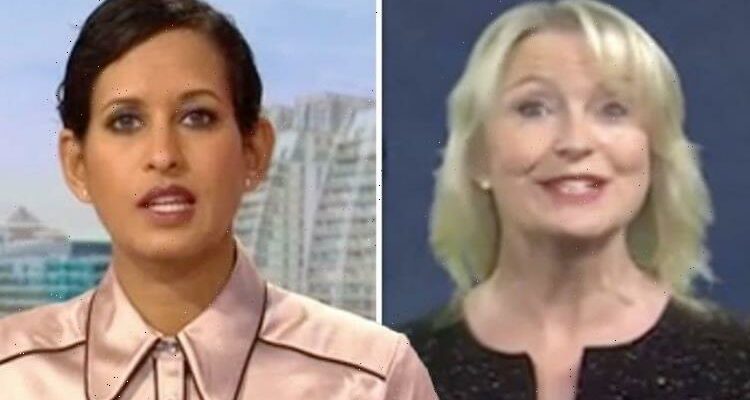 Naga Munchetty and Charlie Stayt were joined by weather presenter Carol Kirkwood on Friday’s BBC Breakfast. The metrologist shared the forecast for the festive period but was cut off by Naga when the BBC host misunderstood one element of the weather presenter’s report.

During Carol’s first forecast of the day, she concluded: “Temperature-wise tonight, cold in the north, not as cold as we come further south, and I’ll bring you the Christmas Day forecast in about half an hour, Naga and Charlie.”

“Did she skip… that is Christmas Day, Saturday, isn’t it Carol?”

“Yes,” Carol replied as she pointed to the text which stated the current forecast was for Christmas Day.

“Look, it says Christmas Day up there but it says six in the morning,” Charlie added.

A bemused Naga hit back: “Oh, right! That’s what I didn’t see because you were in the way.”

Charlie continued: “She’s going to do the rest of Christmas Day later on,” and Munchetty replied: “Yes, thank you.”

However, Naga interrupted the weather reporter when Carol began to tease viewers about what was coming up.

The metrologist said: “During the day… I’m going to tell you whether it’s going to be a white Christmas or not.

“But I’ll tell you now, for most of us it’s not going to be a white Christmas…”

Ignoring Naga’s plea, Carol continued: “Because there’s snow in the tops of the hills in Wales.”

“You teased it and now you’re spoiling it,” Naga joked.

“No what happened was Carol had planned out that she was going to just hold back a little bit of the information,” Charlie quipped.

“Then she was under duress and required to spill the beans on the whole thing.”

“Here’s me forcing Carol to tell us the weather,” Naga commented.

BBC Breakfast airs on BBC One daily at 6am.