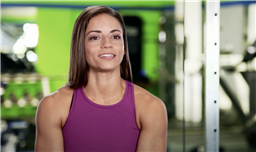 In 2014, Whitney Way Thore gained internet stardom after uploading a video of her dancing via YouTube. The viral video became a series, with all of them titled “Fat Girl Dancing.” Indeed, Thore has never had an issue calling herself fat. She also knows she can dance better than most skinny people. In 2015, the Discovery Channel offered the internet star her own series called My Big Fat Fabulous Life, which airs on TLC. Since then, fans have watched Thore navigate family, work, relationships, as well as weight struggles resulting from polycystic ovarian syndrome. What some My Big Fat Fabulous Life viewers might now know, however, is that Thore’s trainer, Jessica Powell, has a fantastic weight-loss story of her own.

After gaining 200 pounds in college due to polycystic ovarian syndrome, Thore has been on a fitness journey. She understands that being healthy is essential and wants everyone to feel able and motivated to work out. That is why she started the streaming service, No BS Active. The goal of the program is to stream workouts for all body types and fitness levels. You don’t even need any equipment except optional light weights, making the workouts convenient for everyone anywhere.

Originally, Thore started the business with Ryan Andreas. The two met each other on a dating app and although sparks did not fly for the duo, they remained friends and launched their business together. Unfortunately, after Thore split from Andreas’ friend, Chase Severino, No BS Active announced it was taking a hiatus. Luckily for fans of the subscription, Thore has relaunched with a new business partner, Powell.

Thore isn’t the only one on My Big Fat Fabulous Life with an impressive fitness journey. Her longtime friend, trainer, and now business partner, Jessica Powell, has an inspiring story of her own. The fitness competitor and personal trainer has not always been in incredible shape; at one point, she weighed over 200 pounds. Through exercise and diet, Powell lost the weight and now works to inspire others. Experiencing weight struggles herself, Powell is a good fit for Thore’s brand image.

Powell also has inspiration for running a fitness company. Her father owns the gym at which Powell trains. He also is a fitness competitor and CrossFit enthusiast. Sharing her passion with her father and working alongside him gives her the experience needed to partner in a fitness company. Not only do the duo work at the same gym, but they also compete together. They have competed as a team in a CrossFit competition and also competed in the same bodybuilding competition.

Are Thore and Powell feuding?

With Thore and Powell both having experience with weight struggles, it is easy to see how the two became fast friends outside a business relationship. According to Heavy, fans are beginning to question, however, if the two have had a falling out. On July 11, Powell announced her engagement to boyfriend, Isaiah Martin. Fans expected that Thore would have shown support for her friend, but instead, there was silence. Thore has yet to congratulate Powell via social media.

It is possible that Thore simply isn’t active on social media at the moment. She announced shortly before the engagement that she was on a sabbatical in France. There are also no other signs Powell and Thore are at odds. The two still follow each other on social media, and the No BS Active site is still live. Time will tell what the truth is behind the scenes for these two friends and business partners.