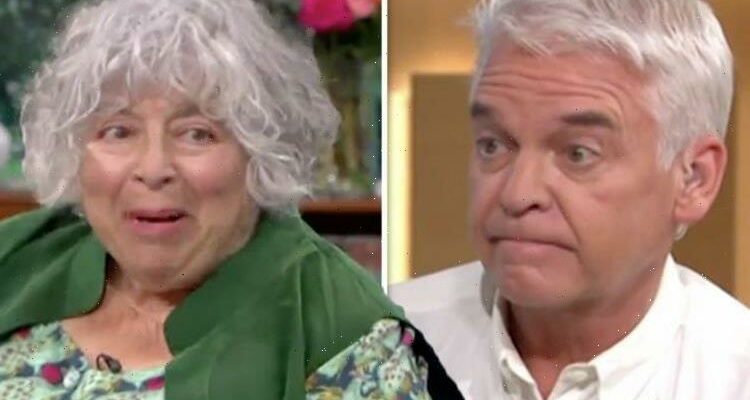 Miriam Margolyes tells Phillip Schofield she thought he was gay

Miriam Margolyes joined Phillip Schofield and Holly Willoughby on Tuesday’s This Morning to discuss her new biography This Much Is True. However, when Phillip questioned the Harry Potter actress on an aspect of the memoir where Miriam opens up on her sexuality, she revealed she believed the presenter was gay even before he came out last year.

Phillip said: “One of the things that you regret, which I thought was really sad when I saw that, is that you came out to your parents and then it wasn’t long after that your mum had a stroke.”

Miriam replied: “I always felt guilty about that, I mean you’ve been very brave, you came out.”

“I sort of thought you might be gay,” she noted and he asked: “Did you?”

“You know when I met you because you’re a bit camp,” the actress explained.

“Yeah,” Phillip remarked and she continued: “I suppose I’m a bit camp too.”

“I think most people in telly are a bit camp if I’m honest,” the presenter quipped.

“I think they are,” Miriam replied before asking Holly: “Are you camp?”

“Completely,” the This Morning host answered. “I hope so!”

The Call the Midwife actress added: “If people can be, I’ll tick them.”

Miriam explained her mother “couldn’t handle” her coming out as a lesbian and it was “too much for her”.

“That’s why I say people shouldn’t come out to people who can’t handle it,” she said.

“It’s tough to keep it in because I want to share, and when I fell in love I wanted to tell everybody that I was in love.”

Miriam revealed she had her partner Heather Sutherland have been together for 53 years.

This Morning viewers were thrilled with Miriam’s appearance on the ITV show and took to Twitter to praise the actress.

One wrote: “Petition for Miriam to present @thismorning with @Schofe for a week. It’s what my soul needs. #ThisMorning.”

“I will never stop saying this. I LOVE MIRIAM MARGOLYES!! #ThisMorning,” another tweeted.

A third said: “@thismorning Miriam to Phil: ‘I always knew you were a bit gay’ she really doesn’t care what she says that is why I love her #ThisMorning.”

A fifth added: “I love Miriam. She doesn’t give a damn about what anyone says and what anyone thinks #ThisMorning.”

Phillip revealed his sexuality last year before appearing on This Morning to discuss the announcement with Holly.

This Morning airs on ITV on weekdays at 10am.