Mila Kunis and Ashton Kutcher gave insight into some of their parenting habits on Dax Shepard’s “Armchair Expert” podcast, which took co-host Monica Padman — and fans — by surprise.

The two Hollywood heavyweights first met when she was a teenager and he was in his early 20s on the ’90s sitcom “That ’70s Show,” where they played high school lovers. Last year, Kunis even revealed their on-screen kiss was in fact her very first, per People. After “That ’70s Show” wrapped in 2006, the pair lost touch, but several years later they ran into each other at an award show — just after Kutcher’s split with Demi Moore, according to People. Kunis and Kutcher tied the knot in 2015 after the birth of their daughter Wyatt. They later welcomed son Dimitri.

The “Black Swan” star previously described herself and Kutcher as “goofy parents” on the “Teach Me Something New” podcast. and even revealed on “Jimmy Kimmel Live!” that she took her family to a “baby rave” during quarantine. “We’re very comfortable with ourselves acting a fool at home, but maybe that comes from the idea of being comfortable in your own body, and in your own skin, and in your mind and not having a fear of making a fool of yourself,” Kunis told the “Teach Me Something New” podcast. Well, not only are Kutcher and Kunis comfortable in their own skin, they’re also fairly relaxed about their children’s too… in a hygienic sense, that is. 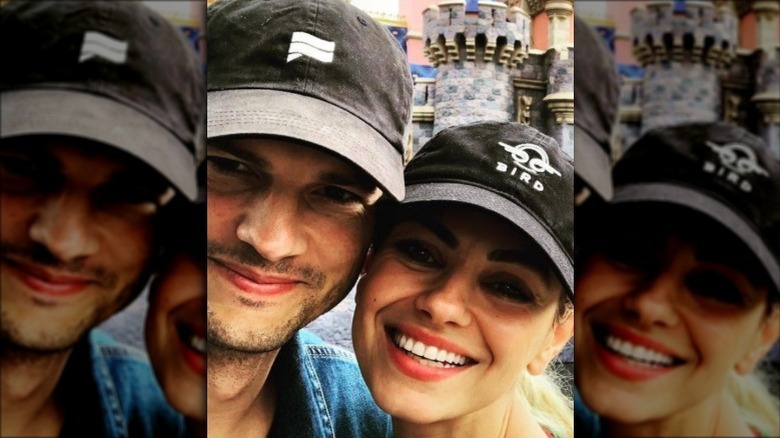 Mila Kunis clearly takes her job as a mom seriously, but bath time seems to be lower on her list of parental priorities. Kunis told the “Armchair Expert” podcast that she wouldn’t get mad if her kids refused a bath because she never showered daily as a child. “I didn’t have hot water growing up as a child so I didn’t shower very much anyway,” she told hosts Dax Shephard and Monica Padman. “When I had children, I also didn’t wash them every day. I wasn’t that parent that bathed my newborns — ever.” But with their kids a little older, Ashton Kutcher said they’ve now nailed the nighttime regime. “If you can see the dirt on them, clean them. Otherwise, there’s no point.”

The pair also revealed their own shower habits, which, unsurprisingly, are pretty simple also — much to Padman’s shock. “I wash my armpits and my crotch daily, and nothing else ever. I got a bar of Lever 2000 that delivers every time. Nothing else,” Kutcher said. The “Dude, Where’s My Car” star also said he has a “tendency to throw some water on my face after a workout to get all the salts out.” Meanwhile, Kunis, who’s featured in Dior campaigns, says she does wash her face “twice a day” but doesn’t wash her full body every day. Well, if anything — they’re probably conserving a lot of water!