We horror-movie lovers are cheap dates. A creaking door and a shocking edit can be all it takes for us to yelp in surrender, as our sympathetic nervous systems kick in and we grab our seat arms or each other. Ari Aster, who made a splash last summer with his feature directing debut, “Hereditary,” understands the genre’s fundamentals. But his strength in that movie and his new one, “Midsommar,” is the setup, that part when he lays out his characters, their worlds and the menace that closes on them like a claw.

A cautionary tale about bad relationships and worse vacations, “Midsommar” gets its creep on early. When it opens, Dani (Florence Pugh), its deeply troubled axis, is having a lousy day that rapidly turns devastating. Her boyfriend Christian (Jack Reynor), who’s on the verge of breaking up with her, isn’t much help, though he eventually comes through. Months later Dani is still having a rough time while Christian continues eyeing the closest exit. Their uneasy dynamic intensifies and changes during a catastrophic trip to a small, strange community in Sweden, where the expected summertime fun gives way to terror.

Aster handles the windup shrewdly with a persuasive realism, a deliberate pace and crepuscular lighting. Notably, he also sets Dani’s solitary tears and all of her feelings against the solidarity that Christian shares with his buds. The guys don’t make sense as friends, which scarcely matters at that point. Aster banks on the suspension of disbelief, which is part of the delicate compact we make with horror movies. When one bro, Mark (Will Poulter), starts running down Dani, you can almost see the expiration date on his forehead. As with much in this hyper-aware movie, Mark fits the role he was created to play by motor-mouthing his way into a narratively justified demise.

The stateside stuff drags (the movie runs two hours, 20 minutes) but when the story shifts to Sweden, everything changes, including the light. With his estimable crew — the cinematographer is Pawel Pogorzelski, the production designer is Henrik Svensson — Aster creates a sun-blasted, open-plan settlement that conveys airiness, back-to-the-land self-reliance and other assorted healthy things. There’s something odd about the smattering of buildings, which are too off-kilter to pass as charming; there are too few shadows and corners to hide in. The same goes for all the smiling white people in their pretty folk costumes. They’re so welcoming, yet so vacant.

If this were a Jordan Peele freakout, someone might have a clue. Someone else might be hurriedly packing a bag. But, as Aster established in “Hereditary,” his interest rests largely on building an elaborate mousetrap. From the moment Dani, Christian and the rest pass through the settlement’s sunburst gate, everything from the green hills girdling the compound to the flowing choreography contributes to the slow-growing, inexorable sense of entrapment. By the time a few dozen women are dancing in circles around a maypole, even the camerawork — with its sinuous flow and contrapuntal push-ins and pullouts — seems to be tightening its grip on the visitors.

It’s fun, at first, partly because something feels distinctly off, like milk that’s just gone bad. (You don’t know how bad until you taste it.) Christian’s Swedish friend Pelle (Vilhelm Blomgren) doesn’t offer any clues. So Christian, Mark and their not-brainy enough pal Josh (William Jackson Harper) scope out the scene and the locals. The women are friendly, and numerous. And while their dances look picturesque there’s an undercurrent of intensity and purpose that starts chipping away at the peaceful vibe.

After a while, an unproductive restlessness sets in as you wait for the characters to matter as much as the silky moves and painstaking details. Horror depends on the spectacle of human frailties, on the good and foolish choices that bridge the distance between the viewer and the screen (or blow it to smithereens). But when characters are as stupid as the visitors in “Midsommar,” it only encourages your sadism, which is presumably the point. Aster clearly worships at the altar of Stanley Kubrick (a hexagonal design here is right out of the Overlook Hotel collection), and he seems too meticulous to let avoidable mistakes — risible lapses in logic — happen without reason.

Unlike Kubrick or Peele, though, Aster isn’t interested in psychological complexities that can make a character’s terminal fate meaningful and turn directorial virtuosity into vision. Despite all the time he lavishes on Dani and Christian’s relationship, which is drawn along stereotypical gendered lines (consuming female need that becomes devouring), the couple remains instructively uninteresting. That’s the case despite Pugh. She works hard to make Dani into more than a walking wound, but again and again, the character betrays both her common sense and your faith, all so the women can dance, the men howl and the maypole can hook up with ye old vagina dentata. 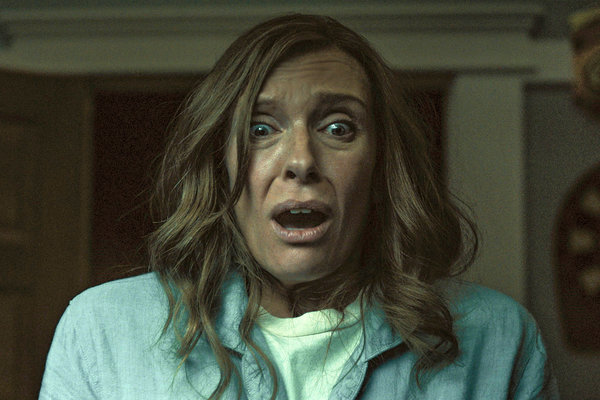 Manohla Dargis has been the co-chief film critic since 2004. She started writing about movies professionally in 1987 while earning her M.A. in cinema studies at New York University, and her work has been anthologized in several books. @ManohlaDargis • Facebook