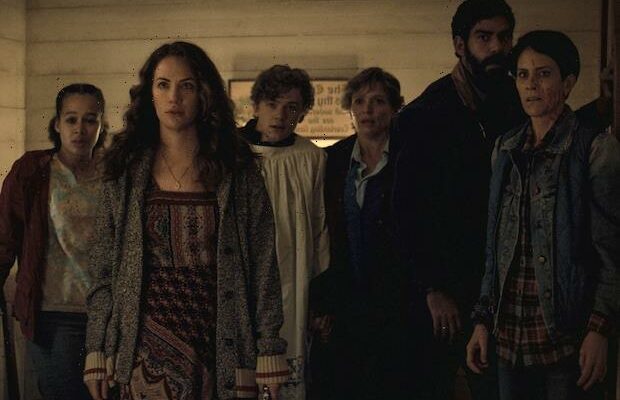 Midnight Mass Episode 6 certainly puts the phrase “the better angels of our nature” in a much different light.

Because, soon after the St. Patrick’s parishioners are introduced to the terrifying celestial being brought back by Monsignor Pruitt, Easter Mass devolves into a deadly melee in which a large portion of Crockett Island’s population is turned into the blood-sucking undead. (Are they vampires? They’re probably vampires. But the show doesn’t use that term, so we won’t, either.)

By the end of the hour, only a small group remains unbitten, and they’re forced to run for their lives while their family members, friends and neighbors all try to make a meal out of each other right there in the pews.

TVLine recently spoke to Midnight Mass stars Hamish Linklater, Samantha Sloyan, Kristin Lehman and Annabeth Gish about filming that pivotal scene in Mike Flanagan’s latest Netflix horror show. Adjectives that made an appearance include “slippery,” “sticky,” “sacred,” “profane” and “ripped” — that last one was courtesy of Linklater, regarding co-star Michael Trucco. But to find out why, you’re going to have to press PLAY on the video at the top of the post.

When you’re done, grade the season as a whole via the poll below, then hit the comments with your Midnight Mass thoughts!