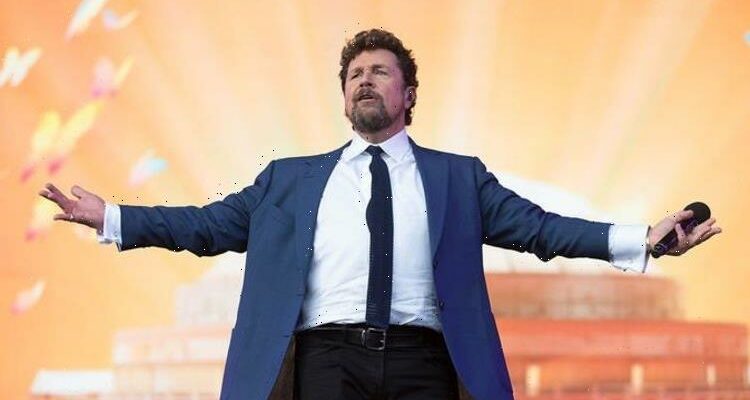 Singer Michael Ball returns to his Welsh roots as he travels to Pembrokeshire and Carmarthenshire in the second of his four-part tv series ‘Wonderful Wales with Michael Ball’ tonight. Michael’s mother grew up in the Cynon Valley, where he still has family, and his grandfather and great-grandfather were both coal-miners. Executive producer Llinos Griffin-Williams, said: “Michael Ball is the perfect star with which to travel through the Land of Song.

“As well as exploring the origins of all the things he thinks he knows about Wales – from castles to coal mines, daffodils to dragons, the valleys to the top of Snowdon – Michael will be uncovering surprising secrets and hidden history.”

Michael has had an album and songs at Number one in the UK, and even performed at Eurovision in 1992.

However, the star had some choice words for audiences he performed to in February last year.

He told PA news agency how he had even stopped performances due to the use of phones, branding it “dangerous” and “annoying”.

Michael said: “It is absolutely the biggest bugbear.

“In concerts, I’ve stopped a show and before doing shows I’ve said (to the audience), ‘Can I just give you some advice?’

“Doing that (filming a performance) while it’s happening up there, just cuts you off. The whole point of this is it’s tonight, it’s one-off, it’s live’.

“And the truth of the matter is nobody watches what they film. It’s always rubbish, always looks bad, always sounds bad.”

On the safety of performers, he added: “The most bloody annoying thing is that it shines up into the face of the person who uses it.

“And it can be dangerous. Theatres, stages are dangerous places. You’re distracted by these things going on.”

His comments came as he was preparing to return as Edna Turnblad in Hairspray The Musical.

Also starring in the West End show was comedian Paul Merton, who also criticised the use of phones.

The star of Have I Got News For You was making his debut on the West End.

He said: “You’re putting a barrier between you and what you’re meant to be experiencing and watching.”

But he quipped that producers might welcome the distraction of a mobile phone during his performance at the London Coliseum, to take the spotlight off him.

Paul added: “I think when I’m dancing they’ll welcome any kind of distraction they can get in the auditorium!

“I wouldn’t be surprised if the producers plant people in the audience with strong searchlights.”

Michael Ball has recently voiced his concerns to the Government over the future of theatre.

He told the Guardian that he spoke to Culture Secretary Oliver Dowden, asking that shows are insured in case they need to be cancelled.

He said: “I had a nice chat with him.

“And so we’ve got to say our piece, and the most important thing I said for us would be Covid insurance for producers.

“It’s all very well opening theatres, but if there’s nothing to put into them, what’s the point? Producers need to have confidence that they can put productions together knowing that, if they have to be cancelled, they’re covered.

“I was banging the gong, in a frock, so I don’t think he knew quite what hit him. But he listened.”