CANNES, France — Becket is the illegitimate son of a wealthy New York dynasty: His mother, an heiress from a family of financiers, eloped with a jazz musician. Becket feels entitled to a share of the family riches, but his evil grandfather is standing in the way.

That’s the premise of “Rothchild,” an upcoming black comedy starring Shia LaBeouf (as Becket) and Mel Gibson (as the grandfather) that was announced at the start of the Cannes Film Festival. The festival, a 12-day event that ends May 25, is an indisputable hub of glamour and spectacle, but it is also an occasion for haggling and deal making — a marketplace where merchants sometimes flaunt movies that haven’t been made yet, in the hope of drawing media attention and attracting film buyers.

The media attention part clearly worked for “Rothchild.” Parallels were drawn with the Rothschilds, perhaps Europe’s most storied banking family. The announcement was covered by an array of global outlets, followed by social media outrage that Gibson, who made anti-Semitic remarks after he was arrested on suspicion of driving under the influence of alcohol in 2006, should headline the movie. The Rothschilds, of course, are Jewish, and Gibson’s character was described as a sinister grandfather, making some wonder if it was too perfect a role for him.

The film’s producer, Keith Kjarval of Unified Pictures, said in an email that the movie was “neither inspired by nor the true story of the actual Rothschild family.” 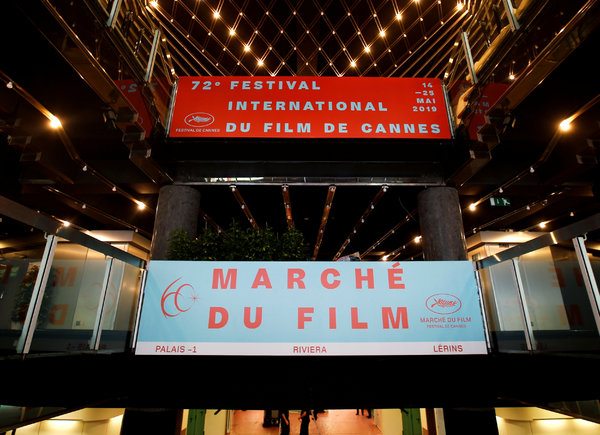 It’s about a young man “on a mission to kill all of his relatives in order to inherit a fortune,” Kjarval said, adding that the concept “is quite clearly outlandish and has no basis in reality.” And Gibson, Kjarval said, is “right for the part of an austere, uncompromising oil baron.”

Smaller projects were to be found in the Marché du Film, a vast marketplace in the seafront building where the festival’s red-carpet galas happen. The Marché is predominantly a place where films are sold, either by countries and their film boards, or by producers via sales agents. Like the promoters of “Rothchild,” these outfits hope to attract interest from the media and buyers.

Among the national booths was one for Majestic Film, run by the Australian director and producer Steve Ravic. The mild-mannered Ravic, an Alice Cooper fan, has a heavy-metal look that jars with the surroundings: long black hair, rings on eight fingers, a black leather jacket, and black cowboy boots studded with nails and tiny skulls.

With him were Charles Billich, a Croatian-born artist based in Sydney, Australia, and his wife and gallery manager, Christa Billich, a star of the TV show “Real Housewives of Melbourne.” The couple are the focus of a documentary shot by Ravic.

A poster for the movie showed Billich next to one of his topless painted figures. Were naked women his specialty? “On the canvas and in reality!” his wife replied.

Other titles being sold by Ravic included “Hotel Underground,” an action movie “with scary gore elements to it,” and “Diary of a Fatman,” a feature film about an unemployed welfare recipient who becomes wildly successful in his dreams.

Ravic, originally a maker of music videos and rockumentaries, said this was his seventh time at the Cannes Film Festival, but the first time he had his own booth. Cannes is “not the market for everyone,” he said. But for an independent filmmaker with prior experience of it, he added, “it’s a good place to be, because the buyers are here.”

Not everyone can afford a big-budget title, Ravic said, referring to the category that would include “Rothchild.” He added: “We cater for those kinds of buyers.”

Another booth was marked “Iraqi Cinema.” There, in front of a wall adorned with the Iraqi flag, was Zaid Jawad. His company operates five complexes in Iraq, including three in Baghdad that are currently showing “The Avengers.” He said he was in Cannes to buy movies, including independent films, for his theater chain.

There was another reason, Jawad said: “We want people to know there is cinema inside Iraq.” He said that every time he had taken a booth at an international film market, the reaction was, “Really? You have cinema in Iraq?”

Outsiders often think of Iraq as a land of fear and terror, Jawad said, but Iraqis are interested in the kinds of movies on offer in the Cannes market. The only caveat: Scenes “not suitable for our society,” meaning those containing sex or nudity, would be cut, he said. (“Kissing is O.K.,” he noted.)

The Marché du Film was started at the Cannes festival in 1959 by a few dozen attendees who saw the need for a place to do business. Last year, there were a record 12,411 participants, there to work, screen their movies and meet peers.

Huck Melnick, a London-based script doctor and director, said although the digital revolution had “democratized” film production and postproduction, there was “still a bottleneck” when it came to distribution.

Melnick said that film funding had dropped in the United States and Europe since the financial crisis, but that international players like China were stepping in. “Some doors close, other doors open,” he said.

Michael Hayes, founder of Prolific Pictures, set up a sales agency in California more than a year ago, with the goal of selling quality titles. His Cannes booth advertised “Battle Rattle,” about a war veteran suffering from post-traumatic stress disorder, and “At the End of the Day,” about a conservative Christian professor trying to stop the opening of a shelter for L.G.B.T. youth.

Hayes said that Cannes was the best international market to be at, despite the expense, because buyers “know where we are: We’re in a directory, we’re on the map, our name is on the marquee.”

He said that colleagues were “feeling frustrated” because video on demand was putting pressure on the price per film, but, for his part, “as long as buyers show up, we’ll continue to come.”