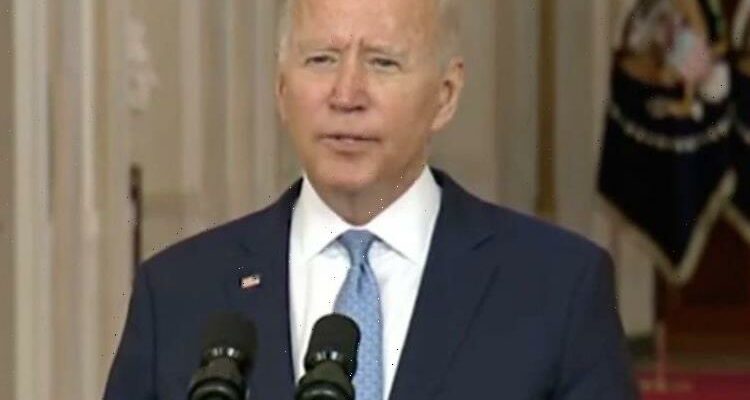 Former The View co-host Meghan McCain, who has been a longtime family friend of Joe Biden, has ripped into the US President’s speech marking the withdrawal from Afghanistan apart. Ms McCain launched a Twitter rant at President Biden, saying she did not “recognise” him anymore. Mr Biden attracted much criticism following his speech as he branded the chaotic withdrawal of Western troops from Kabul “a success.”

In response, Meghan McCain tweeted: “[Thirteen] American soldiers are dead – most of them between the ages of 20-23 because they were put in harms way chaotically in the line of fire of a suicide bomber.

She wrote: “This is extremely difficult for me to say: I once thought I truly knew Joe Biden and he helped me through pain and grief, for which I am grateful.

“This man on TV giving this speech, I do not recognize this man.

During his speech, Mr Biden said: “Last night in Kabul, the United States ended 20 years of war in Afghanistan.

“The longest war in American history.

“We completed one of the biggest airlifts in history with more than 120,000 people evacuated to safety.”

Sturgeon under pressure to make four-day working week PERMANENT as Scots back £10m scheme [Analysis]
‘How is that no retaliation?’ Taliban grilled as Susanna Reid confronts him on Kabul crime [Video]
Taliban warned ‘they will pay high price with their blood’ as rebel forces amass in valley [Insight]

“Only the United States had the capacity to will and village and to do it and we did it today.

Mr Biden has been widely criticised – at home and by his allies – over the abrupt manner of the US withdrawal.