On Wednesday, World of Wonder unveiled the 12 queens competing for the title of UK’s Next Drag Superstar on RuPaul’s Drag Race UK season 2. This year’s crop of dolls includes a former X-Factor contestant, a COVID-19 frontline nurse and a nonbinary drag troll, for good measure.

DRUK‘s inaugural season saw judges RuPaul, Michelle Visage, Graham Norton and Alan Carr crown The Vivienne. As for her successor? Get to know the season 2 queens below. 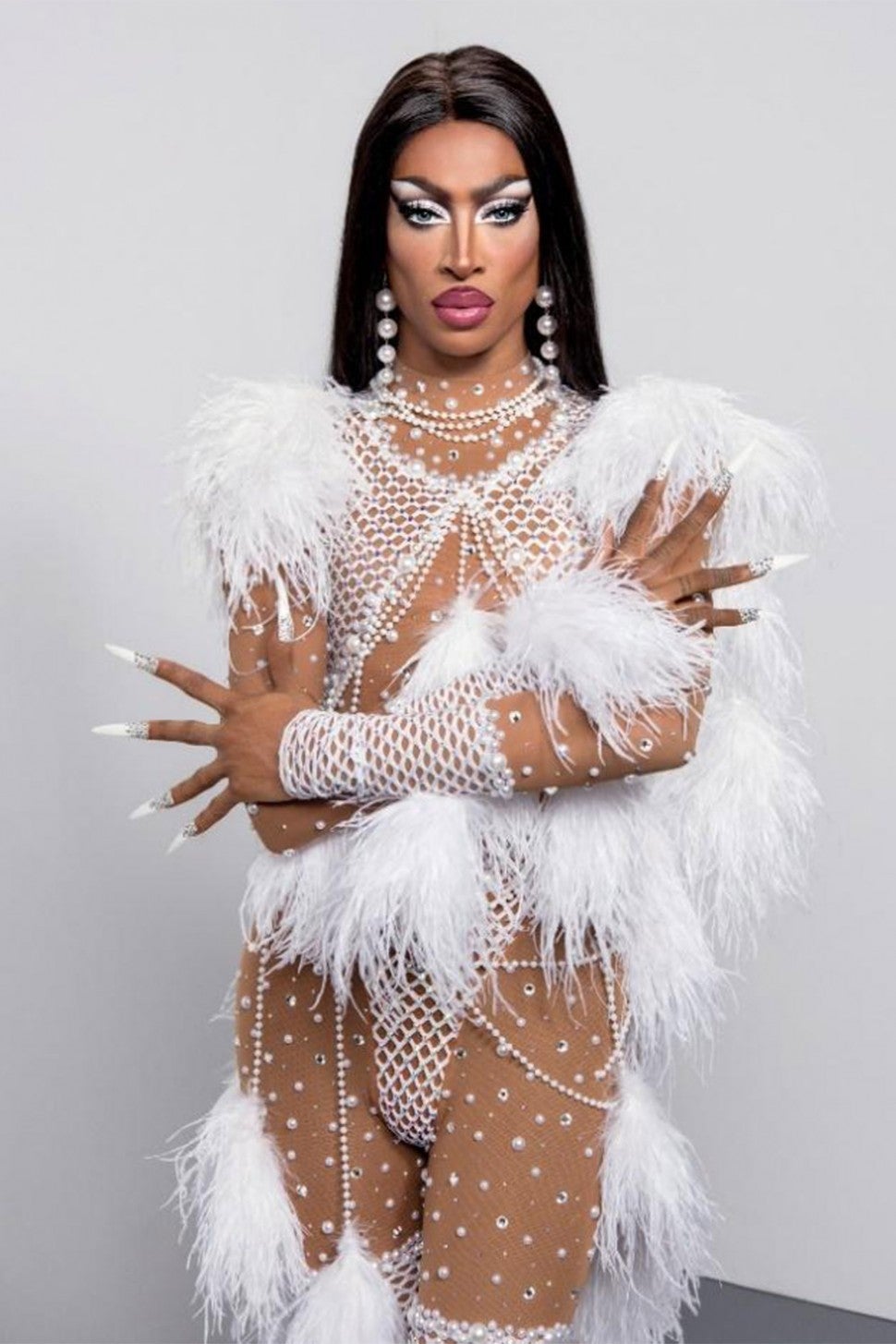 “The Tayce look is very ‘model-esque’, very villainess, very street fighter. I’m dark and edgy. Sometimes I like to switch it up, look at me now… I’m like a bird of prey, or a bird of paradise, a sexy owl.” 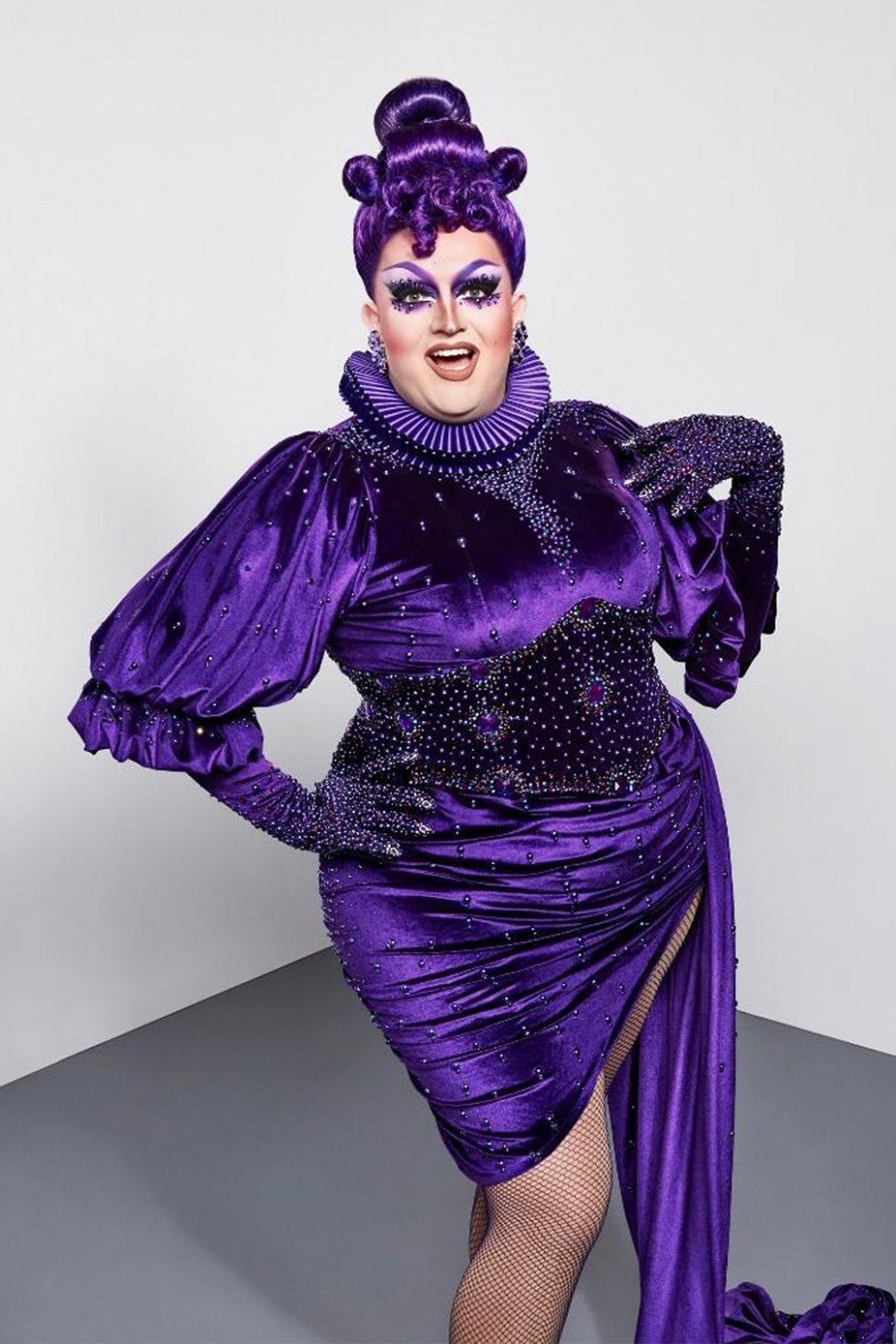 “I’m from Glasgow and every single stereotype that you are thinking right now about a Scottish person is is true for me! I love Irn-Bru and a caramel wafer. I’m almost the Austin Powers Fat Bastard of drag! I think of my Scottishness as an asset. I am definitely very proud to be Scottish and Glaswegian.” 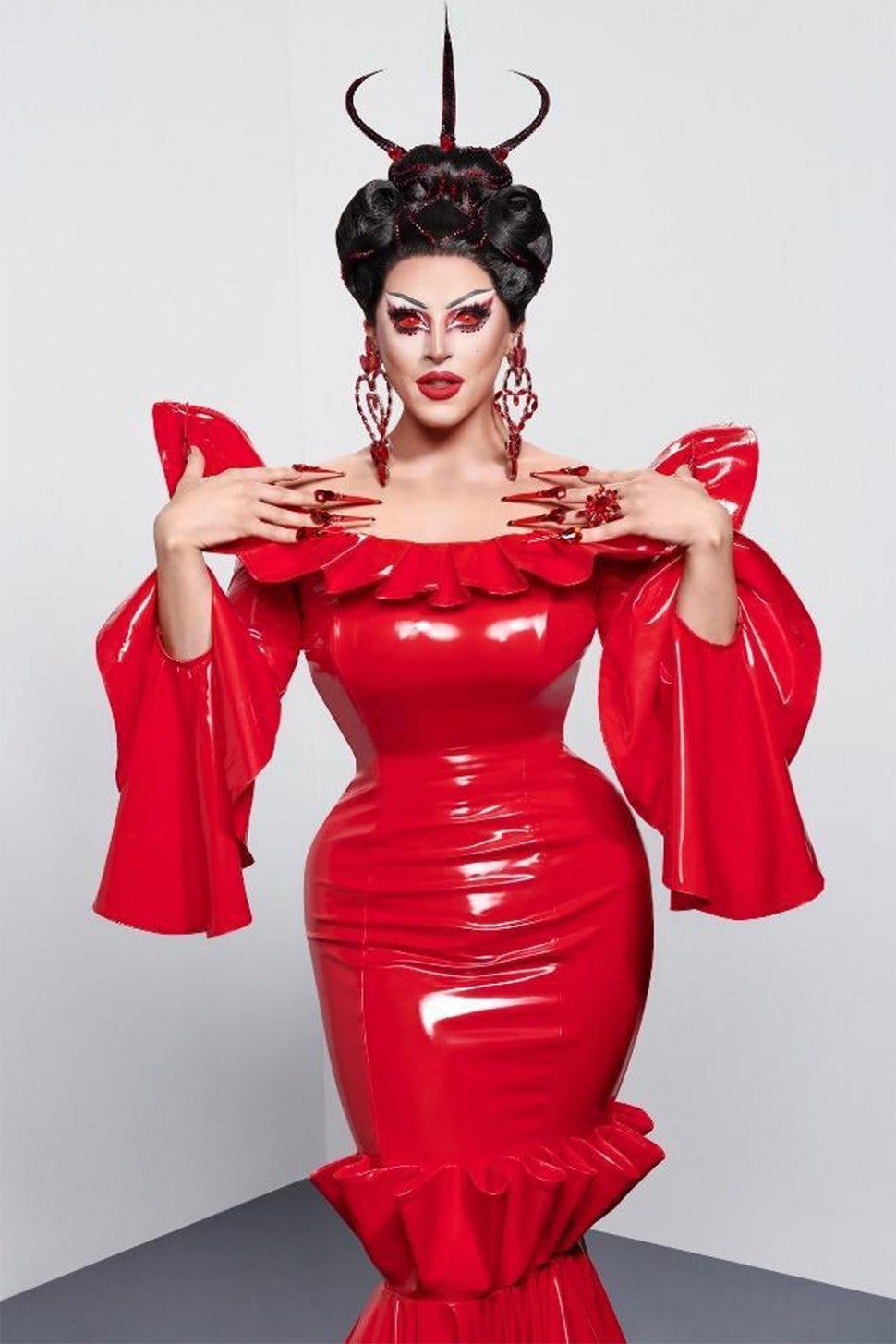 “In the world of drag, just like a Cherry, I sit on top! Cherry Valentine is everything. She is glamour, she is a club kid, she’s dark, she’s gothic, she’s a dancer, she’s flippy. Look at me, I am a queen. I’m a high fashion queen. I look fierce, and my body is hourglass perfect — as there’s nowt worse than a saggy boob. I like to say my drag is insidious glamour – a beautiful lady possessed by the devil. I’m not always a drag queen, I’m a drag artiste, there’s a subtle difference.” 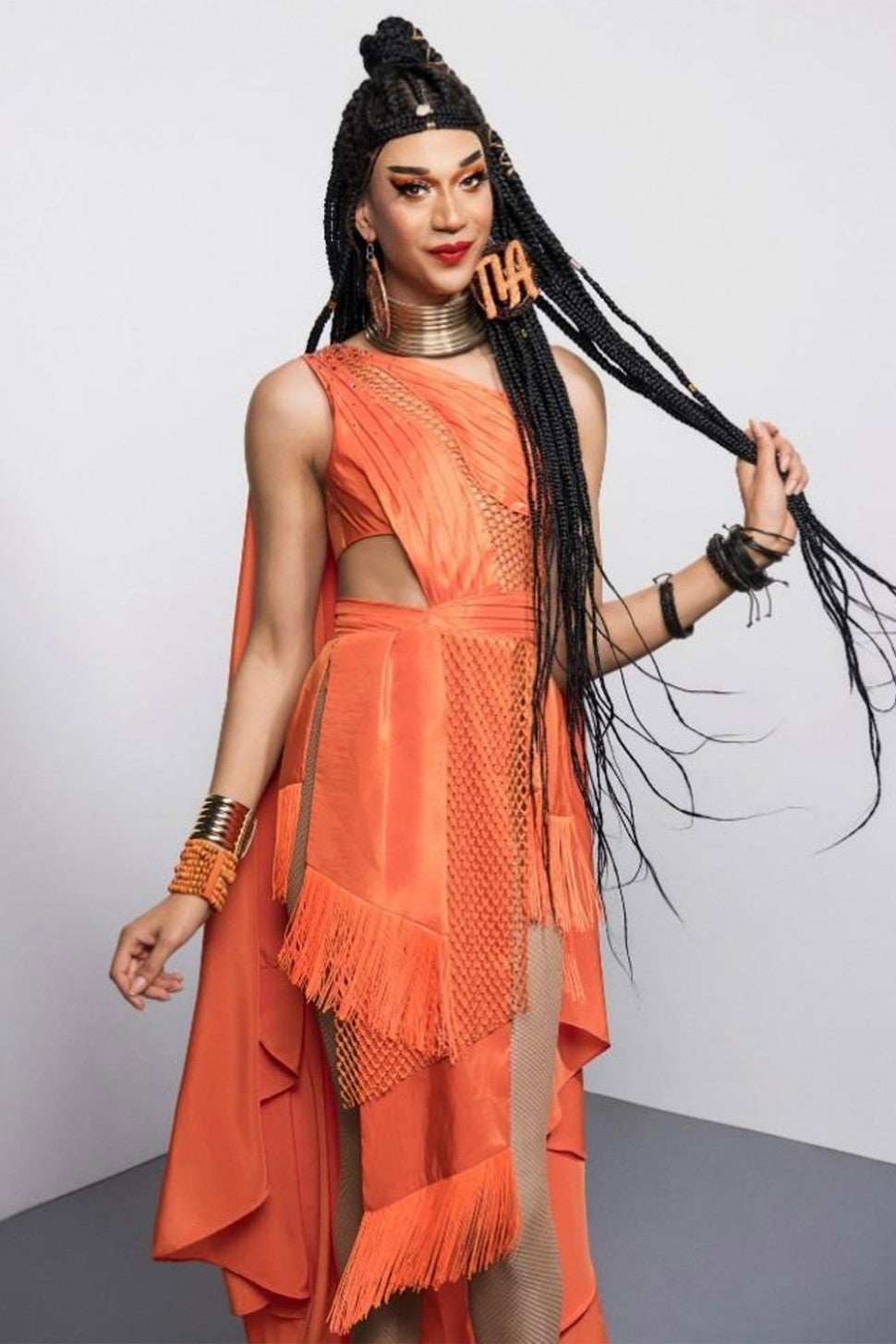 “My name, Tia Kofi is a very camp and very British — Tea or Coffee darling? It’s very me, and at the very least, it’s memorable! I’m a mashup of the drag styles. I love comedy, camp, old school, contemporary, and cultural references. As there aren’t a huge number of POC queens on the scene, I’ll often throw in something from my Nigerian heritage too. I’m also a geek. One day I might be a character from Dr Who, and I love channelling a bit of Star Trek. My drag is a melting pot!” 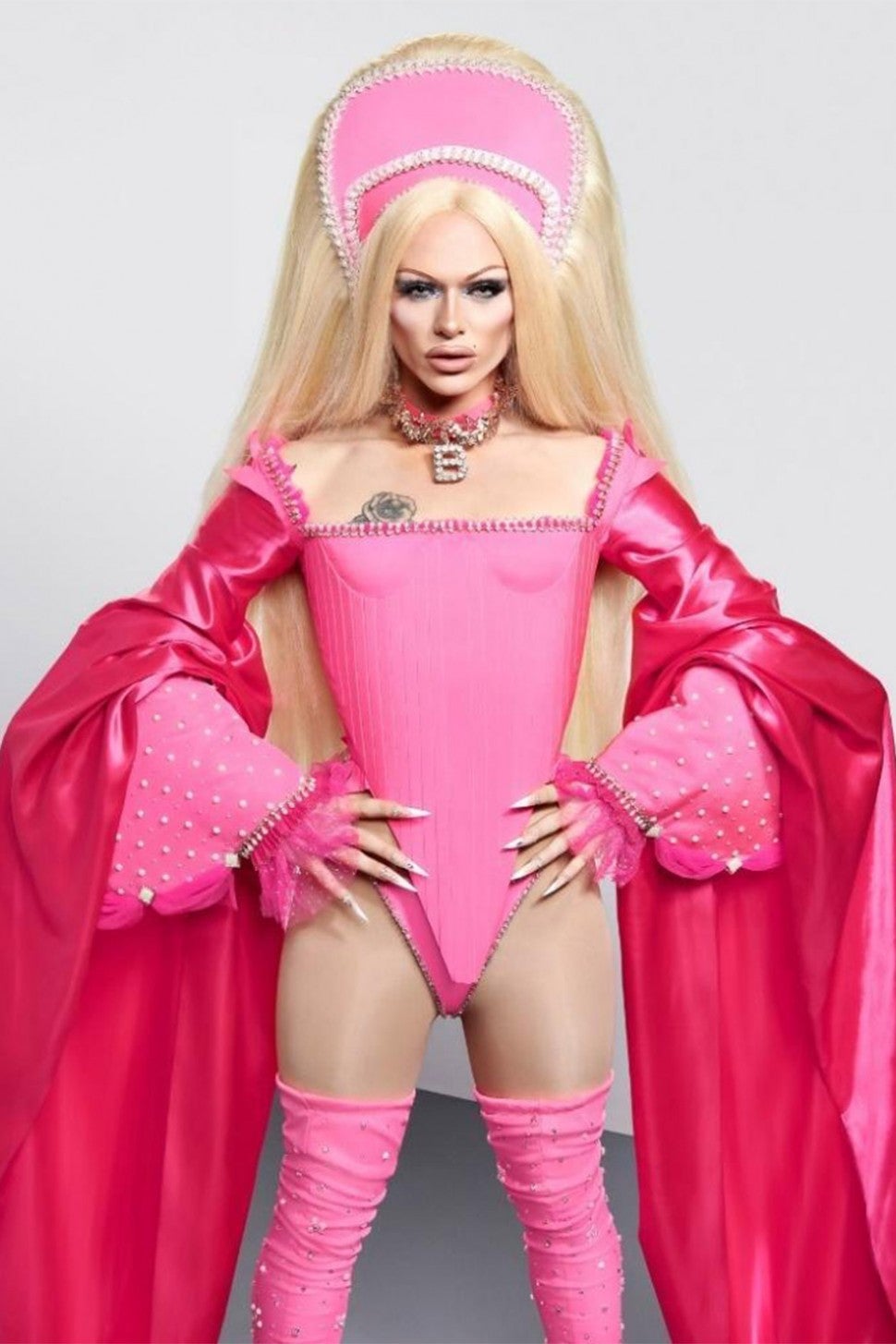 “My drag style is ever changing. I like to be super feminine and incorporate many sources of inspiration. I would never fit my drag into one box! I like to mix the ridiculous with a bit of politics. I’ve got a lot of different acts. Some are burlesque, some are me being covered in oat milk, with a strong vegan message behind it. I’m mainly silly, which is what I love about drag. Expect the unexpected!” 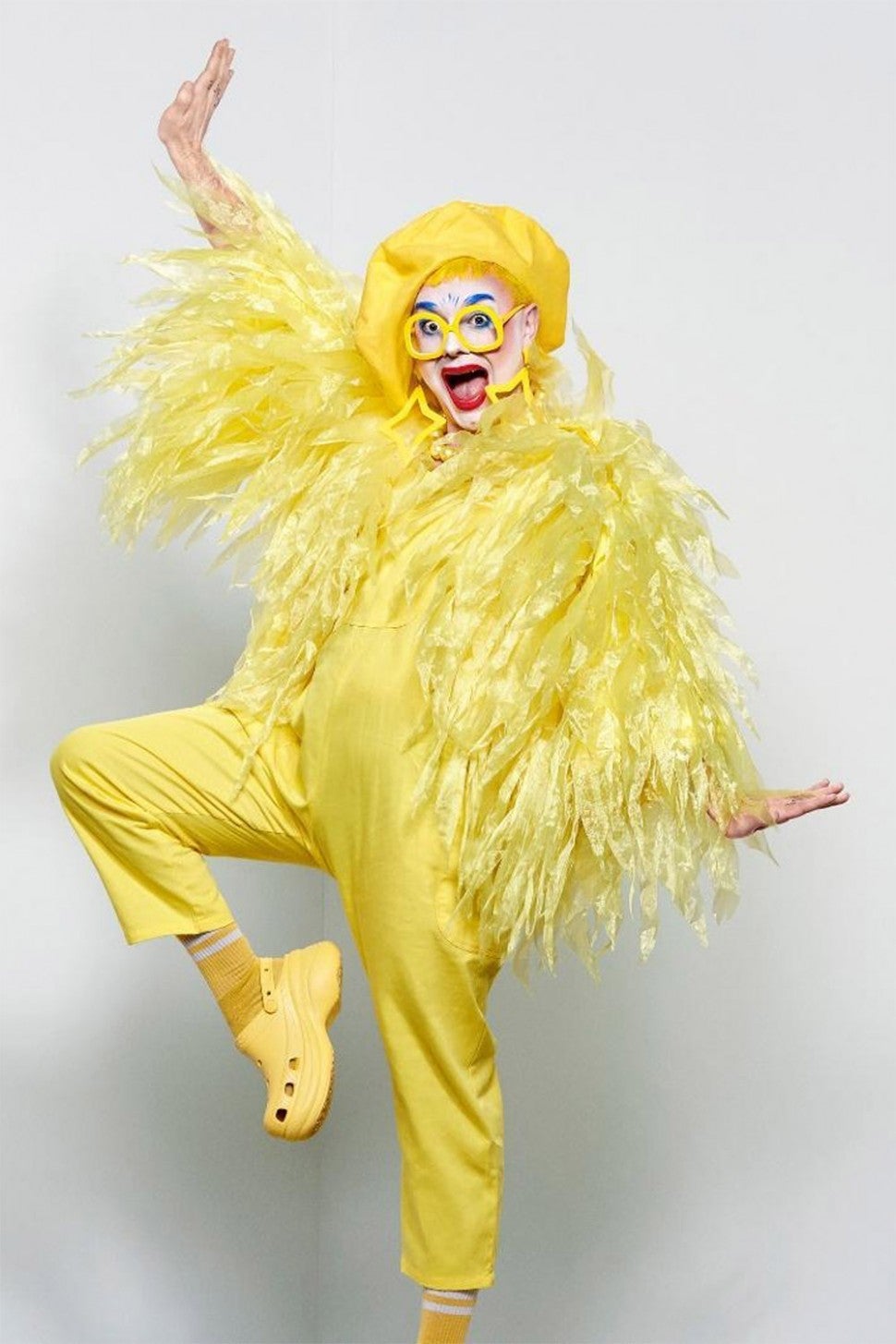 “I’m basically a drag troll. I’m the hairiest woman in show-business! I’m the only non-binary drag queen in the UK…with a sense of humor!  I don’t do traditional drag; I am a character. My look is a 90’s daytime TV presenter. I wear my face which suits me. For me, it’s not about makeup. It’s all about the performance.” 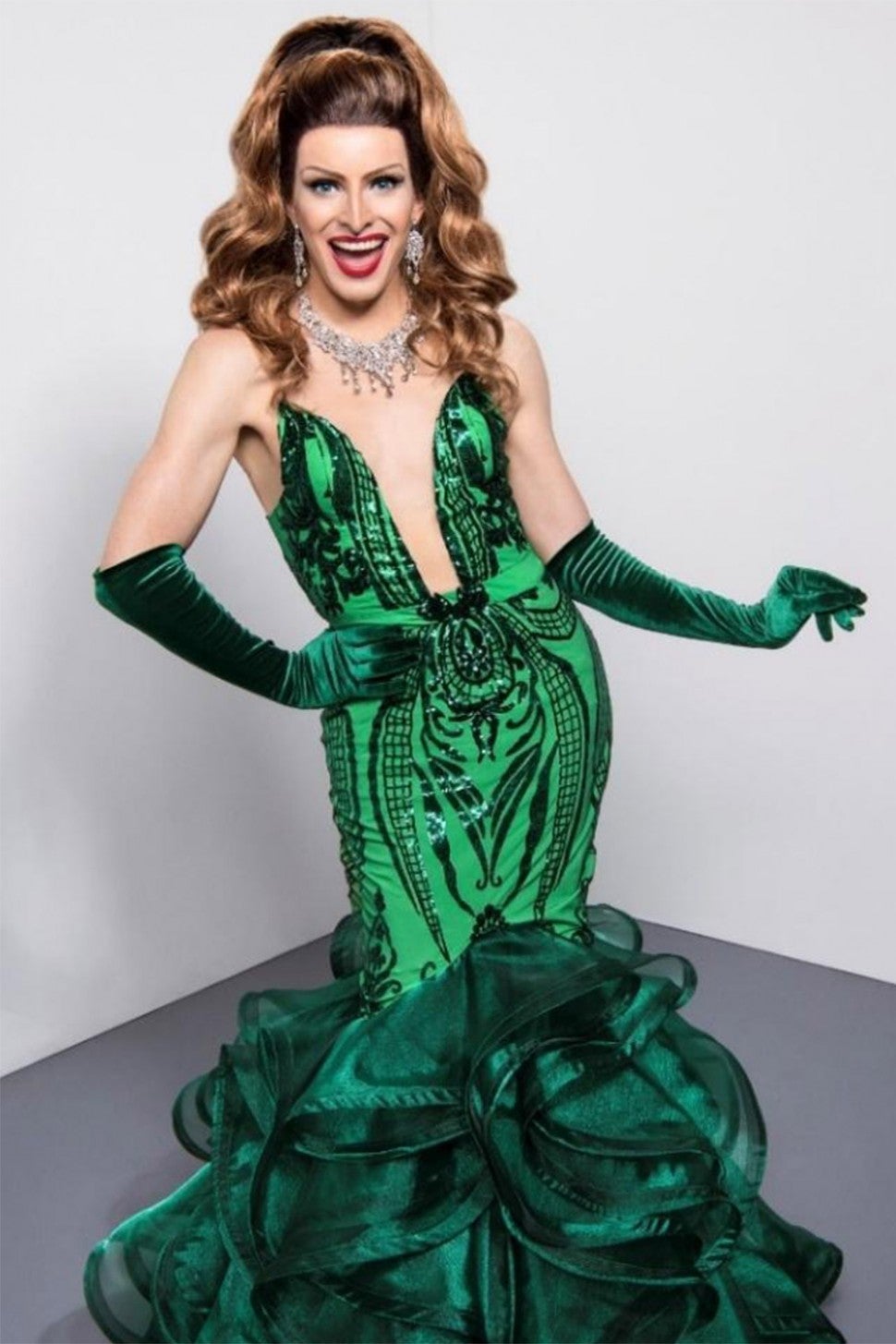 “When I was a little boy, my brother and I used to make our own comic books, and when our baby sister, Veronica, came along we were so jealous that we invented a supervillain in our comic books and called her Veronica Green! Unwittingly, my sister’s birth sparked off my drag persona! She’s going to be mortified at all of this — I stole her prom dress and everything.” 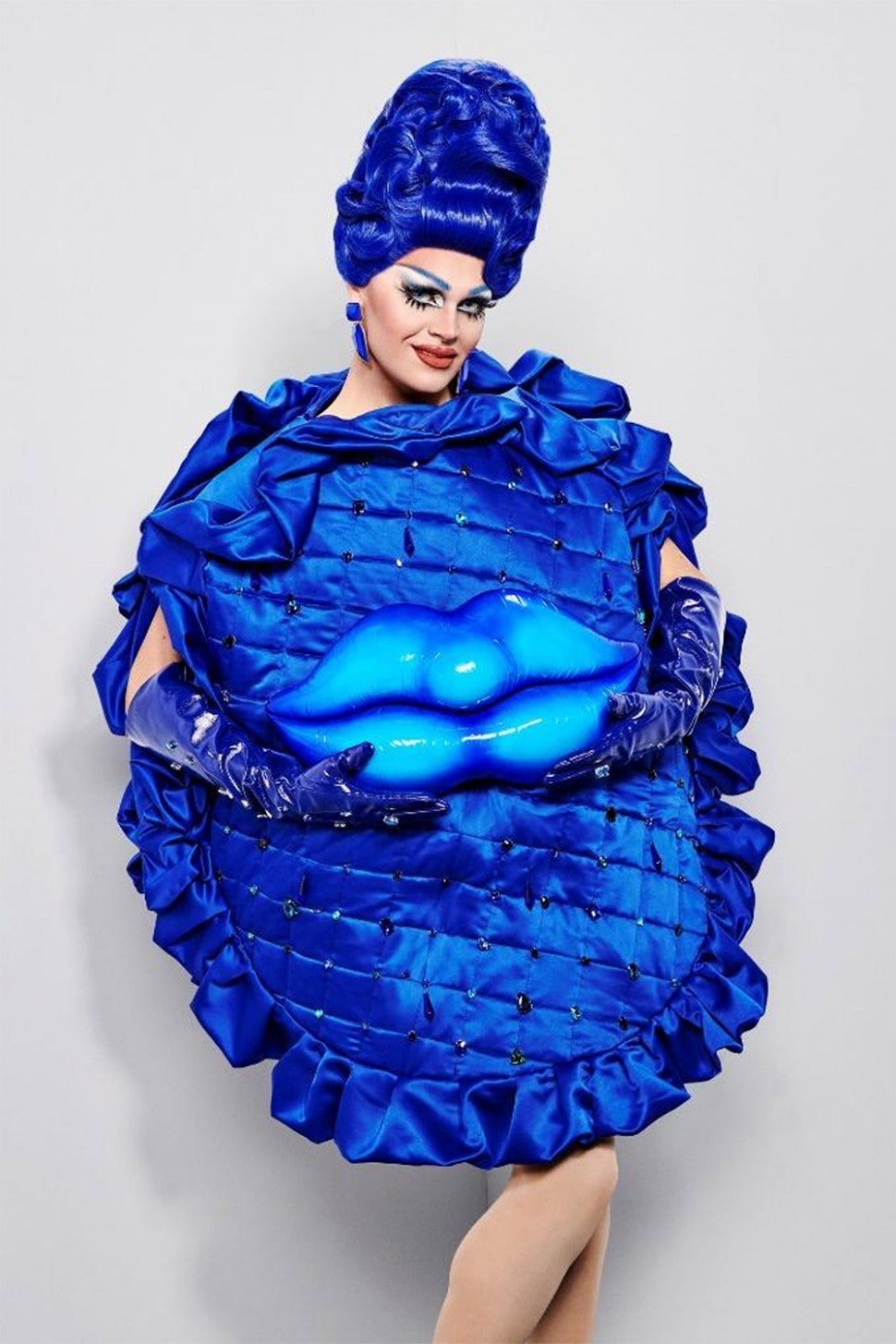 “If you turn up to a Sister Sister show you’re going to get my absurd comedy timing. You will get some fantastic looks and to keep you on your toes, there’s some mild morbidity too. My comedy style is very dry. I think it sometimes takes a few dim-witted people a couple of seconds to catch on. That’s what I love. I have a saying: if you’re not having fun, what’s the point?“ 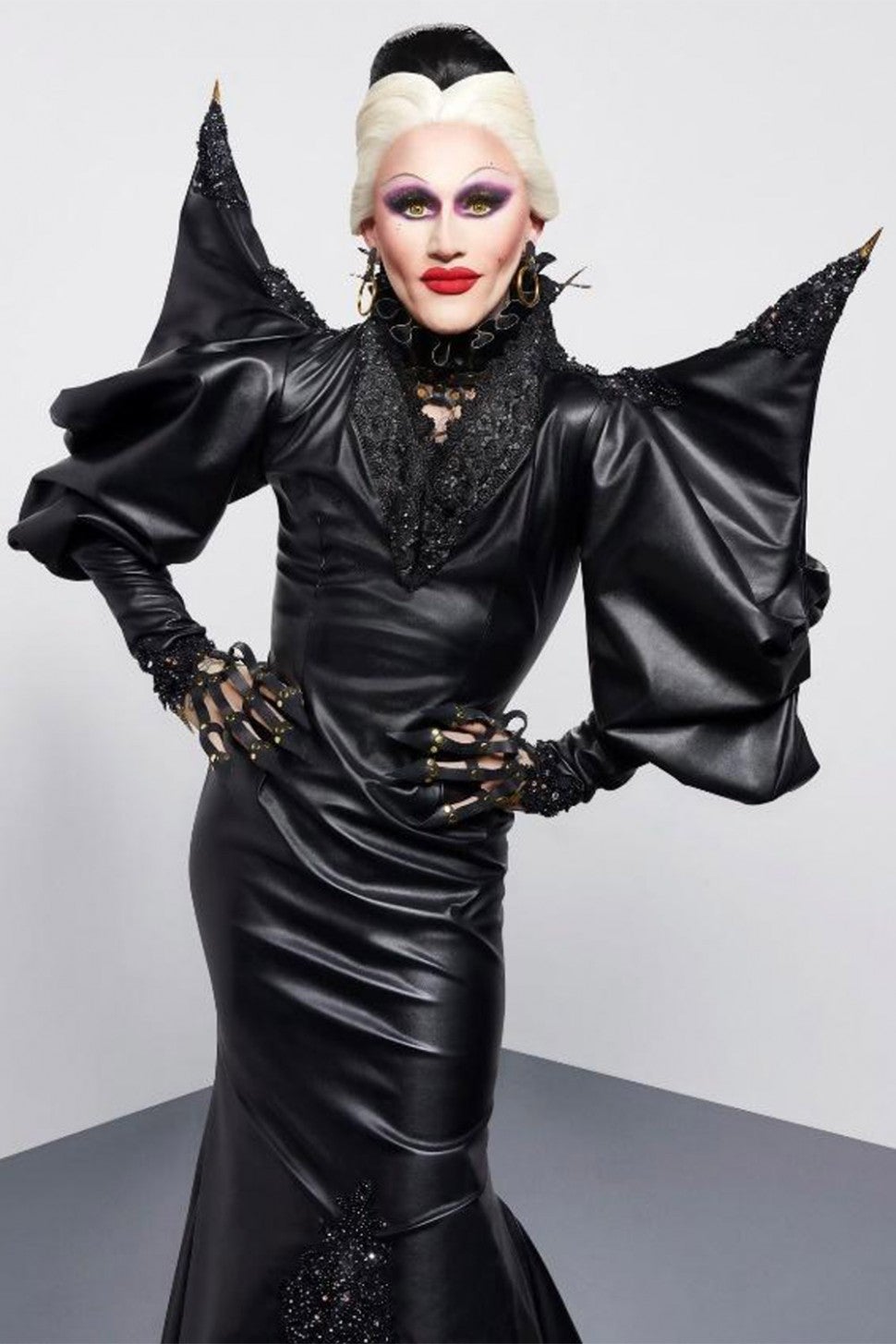 “Imagine you’ve found yourself in some seedy 1920s Berlin cabaret joint where we will have a dark, delicious and deviant time. I bring all the wonky eyebrows and eyeshadow of the traditional seaside drag with a bit of haunted glamour, I sometimes think I’m a bit too much for people, but the nannas love me.” 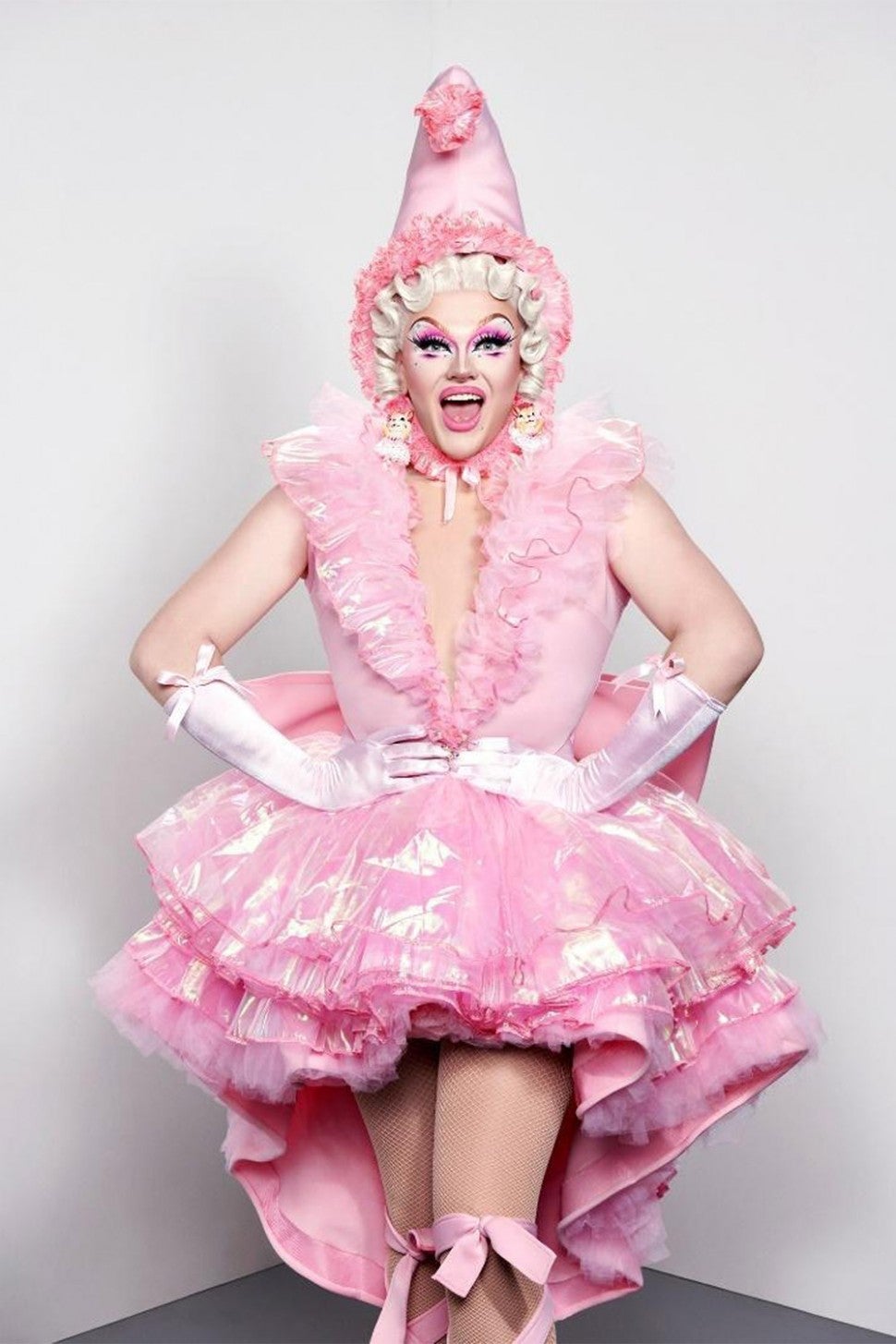 “I’m 6’4” out of heels, and in drag, I love to go even taller. I like the biggest wigs, heels, outfits, lashes, makeup and ass. I would describe my drag as a cartoon character that has come to life — this outfit is inspired by one of my favorite films, The Wizard of Oz. I love bold color, patterns and ideas. I take inspiration from my favorite movies, cartoons, anime and put it altogether to create this beautiful 6’8″ drag queen that you see before you. If you were to search online for a photo of a drag queen, then a picture of me would come up!” 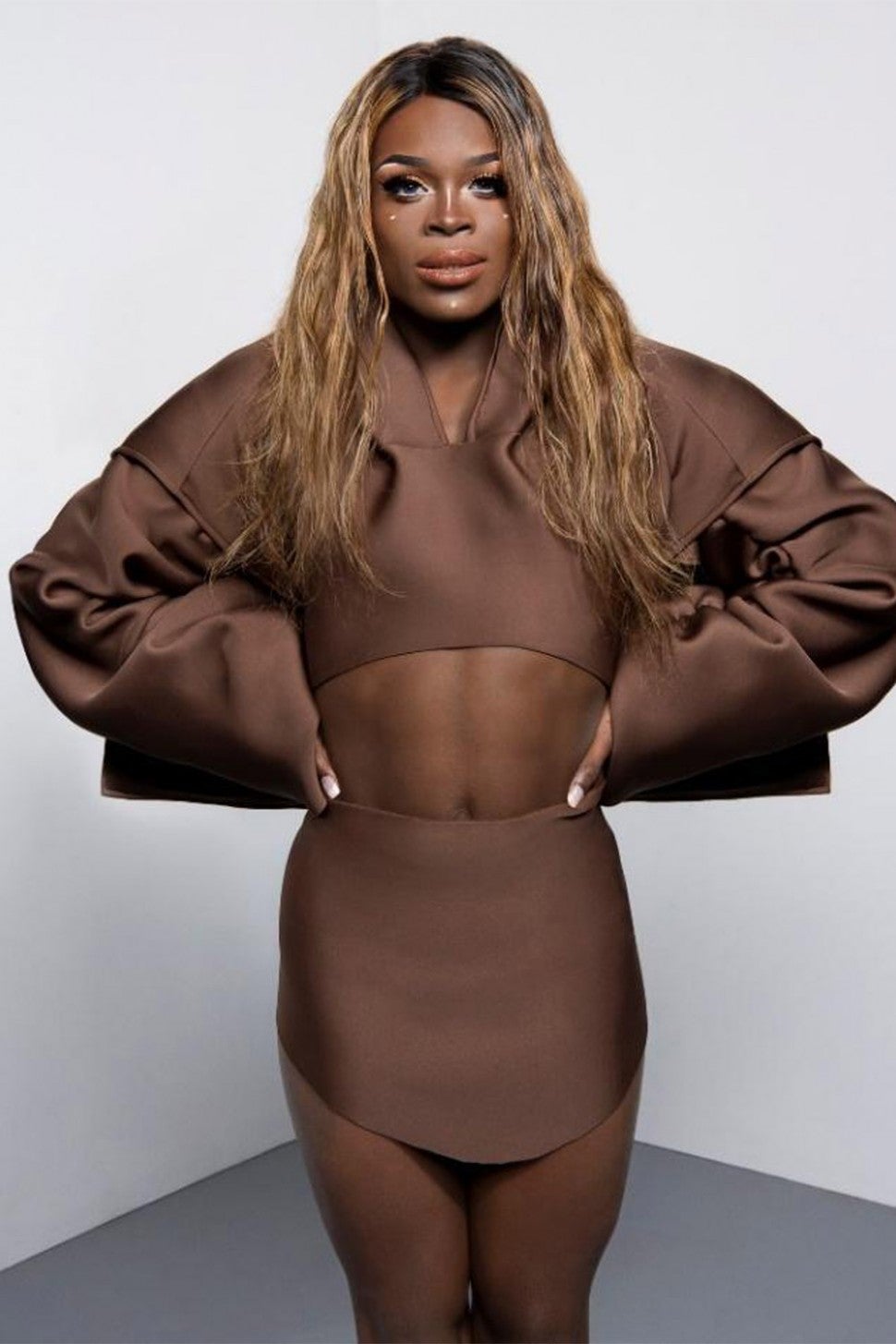 “I am known for giving very extravagant MTV style performances… I have been dancing since I was tiny, and I have been dancing professionally since I was 20 years old. I am trained in ballet, tap, contemporary, Latin, hip hop, funk and street and it’s all in my show. I have worked with Little Mix, Pussycat Dolls, Melanie C, Sophie Ellis-Bextor, Fleur East, Kayne West at the Brits. Now it’s my time to be on the poster and get the headlines. I can’t wait.” 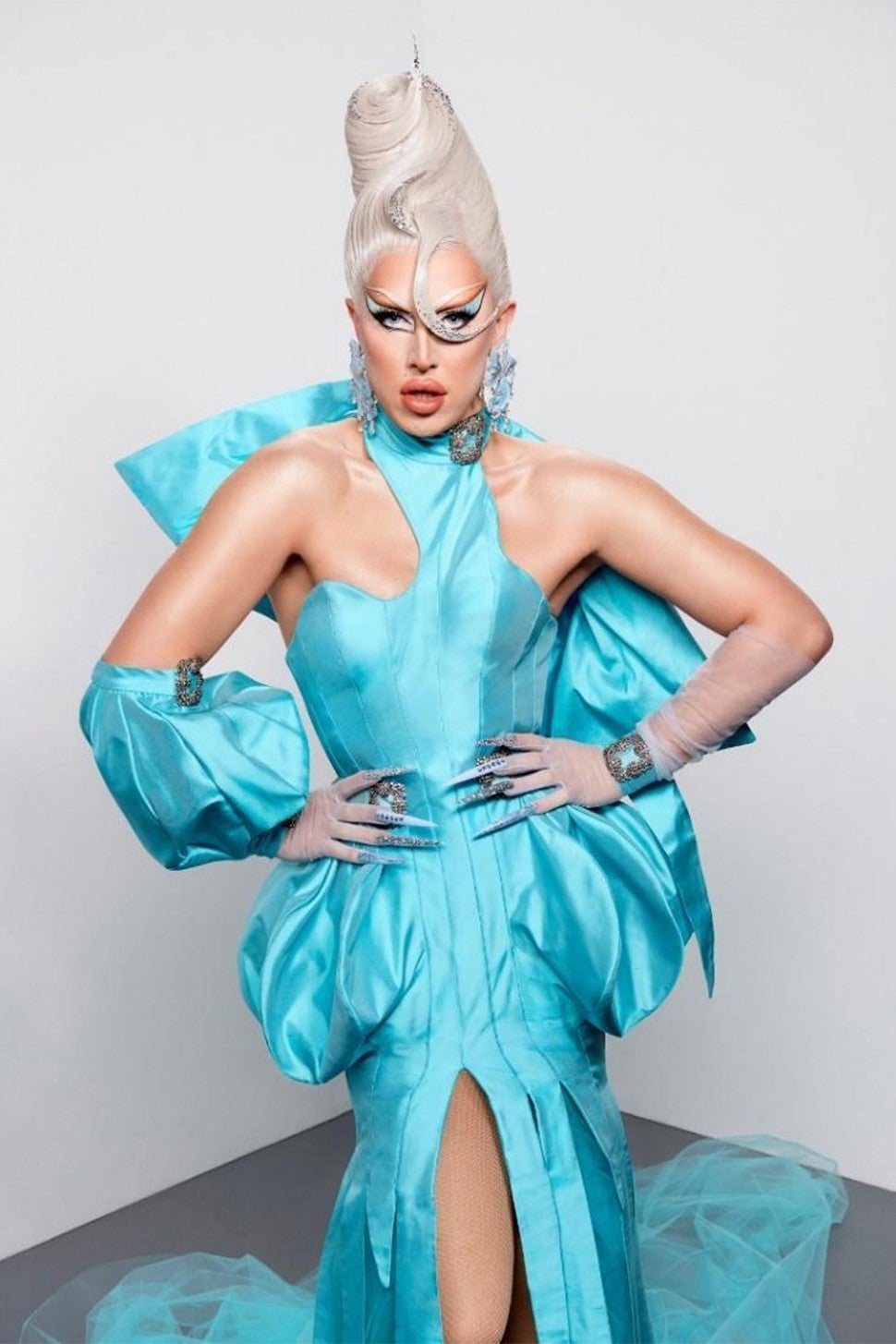 “I’m from Nottinghamshire originally. I now live and work in London, but I’m still Northern as Hell. I’m a fashion designer and A’Whora is my muse, best friend and alter ego. She is well known as a fashion queen, but I’m here to prove she’s so much more than that. She is different to anyone you will ever meet. She is striking, she has presence, and you will never see her in a High Street dress. I’m gagging at the thought!”