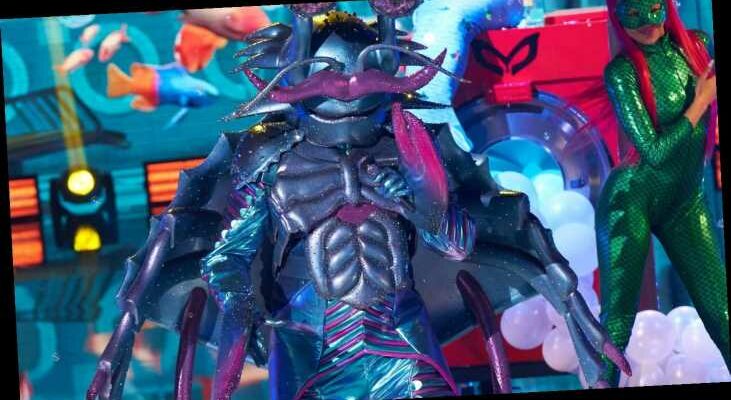 Spoiler alert! The following contains details from the April 7 episode of “The Masked Singer,” including the identity of the unmasked celebrity.

And we’ve arrived at “The Masked Singer” Group B finals!

But it wasn’t just Black Swan, Chameleon, Crab and Piglet fighting to move onto the next round. Another Wildcard, Bulldog, was introduced to shake up the singing competition. And that wasn’t the only source of drama. After Crab sang, he overheated in his costume and needed a break to cool off. (More on that below.)

Once again, Niecy Nash assumed Nick Cannon’s hosting duties since he tested positive for COVID-19 in February. The series sleuths – Ken Jeong, Jenny McCarthy, Nicole Scherzinger and Robin Thicke – were all present to scan the clue packages for tips to the challengers’ identities. They also received insight on what each contestant considered a meaningful item following their performances. Here’s how it all went down.

Raccoon is axed on ‘The Masked Singer,’ after Wildcard Orca makes a splash

Clues: Being in disguise reminded Black Swan of trying to break into show business. “When I first started my career, I was worried about how my appearance would be perceived,” she said. “So I sent out my auditions with no face to be judged only by my talents.” Physical clues in the package included three “10”s scribbled on the side of a mailbox, fall leaves and a patch of the state of Montana on a backpack.

On stage, Black Swan showed her vocal range with Whitney Houston’s “How Will I Know.” Then she explained the significance of a unicorn sculpture. “This is to commemorate one of my best friends,” she said, “an incredible singer who passed away, who’s no longer with us.”

Piglet moves a panelist to tears

If the audience were live, we bet Piglet would draw squeals. (Photo: Michael Becker/FOX)

Clues: Piglet paid homage to his lady love in his clue package. “Someone unexpected appeared and turned my life around,” he said. “Because of her, now I’m a family man, which has brought a whole new purpose in my life.”

His song of choice, Lukas Graham’s “7 Years,” showcased a voice reminiscent of Nick Lachey’s – or whoever this disguised celebrity is. (Lachey, we firmly believe it’s Lachey!) Piglet’s rendition made McCarthy cry, as it brought to mind her 18-year-old son, Evan.

Piglet’s meaningful item – a necklace with dog tags and the letter “P” – only confirmed our suspicions the contestant is 98 Degrees’ Lachey, as the singer has spoken before about how much his dog tags mean to him.

This challenger had to (Crab) walk off the stage. (Photo: Michael Becker/FOX)

Clues: In a bit of foreshadowing, Crab shared in his clue package that his costume made it “hard to breathe.” Thinking back to his childhood, he recalled how his mom made him watch her prepare dinner, which helped blossom a passion for cooking.

On stage, Crab’s version of Rick James’ “Give it to Me Baby” drew praise. As Scherzinger lauded his performance, the contestant asked for a break.

“I gotta take this off,” he said, breathing heavily. “Take it off!” he pleaded repeatedly, before being walked off stage. “It’s hot! It’s hot!” he said backstage. “I can’t breathe.”

Once he cooled down, Crab returned to the stage where he presented a black bowler hat that belonged to Sammy Davis Jr. “I admire him so much that I wore it as much as I possibly could,” he said.

Guesses: McCarthy originally thought of comedian Martin Lawrence, but then she backtracked and suspected “My Prerogative” artist Bobby Brown (a guess that we can get behind). Brown has rocked a bowler hat before and written about learning to cook from his mom. Jeong speculated Crab could be Boyz II Men singer Shawn Stockman.

Chameleon dons the mask for his kid

Clues: Part of Chameleon’s motivation in joining “Masked Singer” comes from wanting to impress his “little chameleon.” He said he changed his wild ways in order to be “a superhero ninja for the little one. I decided to party less and practice martial arts.”

Chameleon showed off his rap skills during his performance of Dead Prez’s “Hip Hop,” before explaining the meaning behind hot wings. “Well, if anybody knows me, they know I’m always cooking something in the kitchen,” Chameleon said.

Guesses: Scherzinger suspected the person behind the disguise could be “No Hands” rapper Waka Flocka Flame and McCarthy thought of “bloody valentine” artist Machine Gun Kelly. But it’s Thicke, who we think is on the right track, with his guess of “Black and Yellow” rapper Wiz Khalifa. The artist also has a restaurant that has hot wings on its menu.

‘Masked Singer’ premiere: Snail is slugged by competition, revealed to be Kermit the Frog

Clues: Bulldog shared that he’s “made moves on every green field with panthers and pit bulls, running fast like a human torch.” He also revealed that he’s “technically the sexiest dog alive, people.” A bowl labeled “Super” hinted at a sports figure behind the disguise.

Bulldog chose to sing New Edition’s “Candy Girl,” which he dedicated to Nash. The song allowed the celeb to show off his pipes and dance moves, as he strutted across the stage.

His meaningful item – a sign that read “And… live from New York, it’s Saturday night!” – conveyed Bulldog’s dedication to the Big Apple and humor (or simply his love of “SNL”).

“My doghouse is in the NY,” he explained. “I’m just a lover for comedy that loves to get live.”

A (bull)dog’s day is over, but the mic is back in his paws

Nash kicked off the elimination round by throwing out the vote. She said she would be the one to select which contestant would be unmasked – she picked Bulldog to reveal his identity.

And the reveal was iconic, to say the least. The celeb under the Bulldog mask was none other than the host we’ve been missing, Nick Cannon.

“I dedicated my whole performance to you (and) you’re going to kick me off!” Cannon told Nash after the reveal.

“You truly are a queen and you stepped in for me during my sickness, during a hard time for me,” he thanked her. “Being able to watch you do your thing amazingly and shine here, I truly do thank you. Thank you so much.”

“I love you, friend,” Nash responded.

It was me behind the #BulldogMask! Did I fool y’all as the latest WILDCARD? Meet me back on #TheMaskedSinger stage next Wednesday at 8/7c for more WILDCARD madness and another celebrity unmasking! 🔥🔥 pic.twitter.com/AgiA8vNtSa

“You threw your voice great, too,” Thicke complimented.

Episodes of “The Masked Singer” can be viewed on Fox’s website.