Margot Robbie next stars as Queen Elizabeth I in historical period drama “Mary, Queen of Scots,” in theaters this month, but many fans are already looking to what the Oscar-nominated actress has planned for 2019: A starring role as Sharon Tate in Quentin Tarantino’s “Once Upon a Time in Hollywood.” The actress previously told IndieWire working with Tarantino was high on her list of dream collaborations since the start of her career, and she recently explained to Net-a-Porter the filmmaker has exceeded her expectations on set.

“Everyone asks me: ‘How is it? How is he on set?’” Robbie said. “I’ve been on sets for pretty much the last 10 years and I still walk on and think, ‘This is soooooooo coooool! Look at that! That’s amazing! Oh my gosh!’ I’m like a kid in a candy shop and then Tarantino walks on and he’s got the same, if not more, enthusiasm and he’s so excited. It’s his film set and he’s not jaded at all – he’s just so happy to be there.”

Following her roles in “I, Tonya” and “Mary, Queen of Scots,” Robbie is once again taking on a real historical figure in “Hollywood.” Sharon Tate was a famous actress and model who was murdered by members of the Manson Family cult on August 9, 1969. To prep for the character, Robbie revealed she read Roman Polanski’s 1985 autobiography “Roman by Polanski.” One thing she did not do is reach out to Polanski himself. Polanski and Tate were married at the time of her death.

“No, I didn’t,” Robbie answered when asked about consulting with Polanski about Tate. “But he wrote a book and there’s so much detail in there that I actually didn’t need to.” 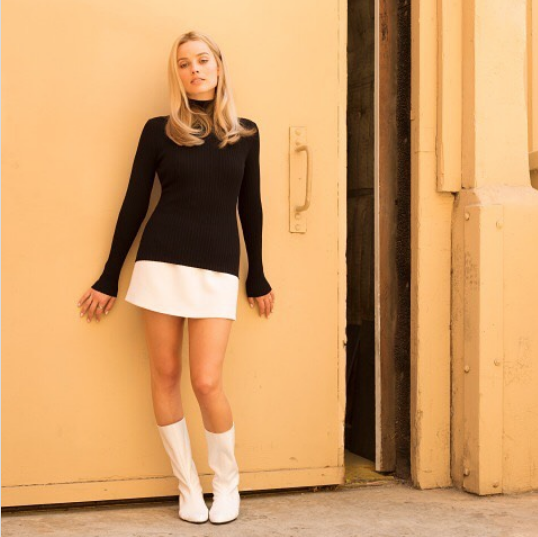 Margot Robbie as Sharon Tate, “Once Upon a Time in Hollywood”

Robbie also revealed she originally questioned if she had the right physicality to pull off the part of Tate in accurate fashion. “I’m very flat-chested,” Robbie said, “and Sharon Tate was not. So I asked [Tarantino]: ‘Any fake-boob situation?’ and he said, ‘No, it does not change the character.’”

A minor nugget about “Once Upon a Time in Hollywood” dropped in Robbie’s Net-a-Porter interview is when the actress mentions, “I’m barely on set with them,” referring to cast members Leonardo DiCaprio and Brad Pitt. Tarantino’s script focuses on a television star (DiCaprio) and his stuntman (Pitt) attempting to break into Hollywood in 1969. The actors’ characters live next door to Sharon Tate and Roman Polanski, and Tate’s death at the hands of the Manson Family somehow factor into the plot. “Hollywood” has been described as being similar to the overlapping short story approach of “Pulp Fiction,” which Tate’s “barely on set” line seemingly confirms. The tip suggests Robbie/Tate will have her own chapter in “Hollywood” as opposed to being directly involved in DiCaprio and Pitt’s sections.

Sony Pictures is releasing “Once Upon a Time in Hollywood” in theaters July 26, shortly before the 50th anniversary of Tate’s death. Head over to Net-a-Porter to read Robbie’s interview in full.