After bidding a reluctant farewell to this season's most entertaining Married at First Sight contestants – Ines, Sam, Elizabeth, and to a lesser extent, Bronson – four more aspiring reality TV stars get hitched during Monday's lacklustre episode.

In a double-wedding special, viewers are introduced to Susie, who marries Billy, and Tamara, who says "I do" to Daniel. But in true MAFS-producer style, the best part of Monday's episode is the 30-second preview for Tuesday's episode. 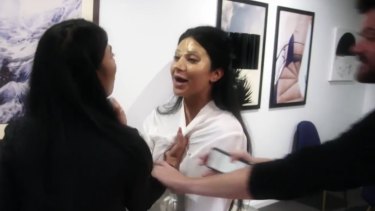 A producer tries to separate Cyrell and Martha in a preview for Tuesday’s Married at First Sight.Credit:Nine

For weeks there has been speculation about an alleged "catfight" between Cyrell and Martha – and sure enough, the claws are about to come out.

After learning that a rumour has been spread about her husband Nic, Cyrell storms into Martha's apartment, where the Kim Kardashian West-lookalike is lounging in a bathrobe and face mask. Cyrell tells Martha that she doesn't like her and grabs her by her lapel – yes, really – as a producer tries to tear them apart.

The camera then cuts to a sombre-looking Cyrell being scolded for her behaviour by the show's relationship expert, John Aiken.

"You can disagree with people but you cannot get that aggressive," he tells her.

Cyrell's latest "blow-up" comes after she was reprimanded by Nic for calling Ines a “bitch” at Sunday's commitment ceremony, after discovering Ines had an affair with Sam.

"I do care about Cyrell but it's a ticking bomb," Nic says of his TV show wife.

Back to Monday's vanilla weddings, it's Susie's straight-shooting father who steals the spotlight.

Susie, 25, a single mother and aged-care nurse from Queensland, marries Billy, 28, a barista and personal trainer. 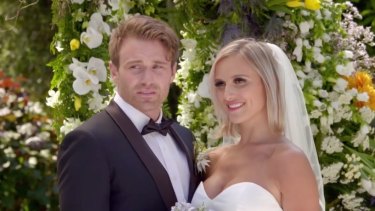 Billy and Susie on their wedding day.Credit:Nine

Susie is "attracted to bad boys with an edge" and so "struggles to find a connection" with the sensitive and emotional Billy.

"I do like Billy but he's not the kind of guy that I would pick and I'm still getting used to how nervous he is," Susie says. "But I'm trying not to think negative thoughts because I do want this to work out."

Susie's "tough" Hungarian father, Steven, picks up on his daughter's disappointment and tells Billy as much.

"You are not the person she wants," Steven tells Billy during a lull in the wedding reception. "Don't get too soft – that's when you are going to f— it up." 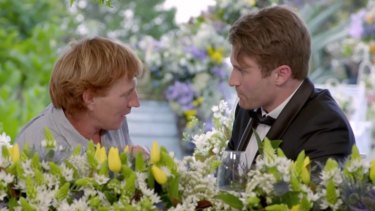 “You are not the person she wants,” Susie’s father Steven tells Billy.Credit:Nine

Not quite done with deflating Billy's ego, Steven also tells him about Susie's daughter Baby, 3, before she has a chance to.

"You know she has a kid?" Steven asks Billy.

Billy says he is "completely fine" with Susie being a mother but wishes she was the one to have broken the news. "The fact that her dad had to tell me that instead of her, I'm full of self-doubt and it's a killer," he says.

Elsewhere, it's lust at first sight for Tamara, 29, an administrator, and Daniel, 35, a single father and car broker.

They bond over their love for their families, with Daniel telling Tamara about his 4-year-old son, while she opens up about the death of her mother three years ago from motor neurone disease.

"I bet she would have loved to have seen you today, you look beautiful," Daniel says during their wedding reception. 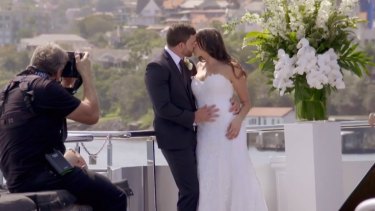 It’s lust at first sight for Daniel and Tamara.Credit:Nine

The two new couples set off on their honeymoons during Tuesday's episode but the real drama goes down back in Sydney amongst the original couples. Let the real show begin.

Nine is the owner of this masthead.