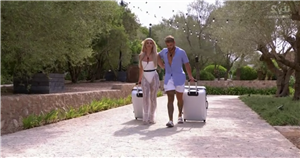 Liberty Poole and Jake Cornish have told their fellow Love Islanders they're leaving the villa as they're "just not getting on".

Following their incredible "dream date" on a yacht in Majorca, the 21 year old blonde beauty and water engineer, 24, returned to the main villa and asked their pals to gather around the fire pit.

Sitting all together, Liberty, who recently slept on the daybed with Kaz Kamwi, explained: "So yeah we went on this boat, it was our dream date and yeah we just like talked things through and stuff.

"We both just come to the conclusion that at this time we should go our separate ways. We're going to leave the villa."

"No you're not!" Chloe Burrows said as Millie Court added: "Now? What the f**k?"

Liberty, who broke up with Jake the day before, continued: "We just obviously don't want to be here and take up a place when I've seen you guys are all strong couples. That was us at one point but it's not us anymore."

Jake added: "We don't want to suck the life out of things, you know?" before adding that they're just "not getting on".

Liberty went on to explain that their romance fell apart but the other Islanders' relationships has blossomed.

"We don't want to drain the life out of the villa with our situation, so we're just going to pack and go."

Their pals couldn't help but break down into tears after the announcement as they tearfully hugged.

"We'll be walking out of here on good terms and together," Liberty added as Faye said: "I'm so sorry guys."

After leaving the villa, it's been reported that Liberty was met with her mum Joanne. "Liberty's mum is already in Mallorca, after flying to the villa to film the episode where the Islanders meet the parents so, she has the necessary support around her," the MailOnline stated.

A source later also told the publication about their reported decision to leave the villa: "It was a really tough decision for the couple to make, but it felt like the right thing to do.

"They'd given it their all on camera and wanted to let their friends in other couples have a chance at winning.

"Saying goodbye was emotional for all the Islanders, as they've become so close, like family, but it won't be long before they're all reunited.

"It's not 100 per cent over for Jake and Liberty, there are still a lot of feelings involved, so who knows what will happen on the future."

For all your updates on Love Island, sign up to our Factor 50 newsletter.