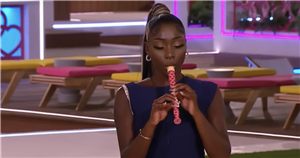 The stars of Love Island were "done dirty" with savage subtitles last night during the talent show, according to fans.

Monday's edition (July 25) of the hit ITV2 dating show saw the islanders take to the fire pit decking to give a series of performances in the talent show.

However it was not just their cringe worthy antics that got viewers' tongues wagging online.

Indiyah Polack, 23, put on a brave performance as she showed off her music skills – or lack thereof – as she attempted to perform a rendition of the nursery rhyme Twinkle Twinkle Little Star on the recorder.

The hotel waitress said she had not played the recorder since she was eight years old and she had the islanders – such as Luca Bish and Gemma Owen – and viewers of the series in absolute stitches.

But her lack of experience was laid bare by not just the islanders' reactions, but by the subtitles emblazoned on some television screens.

Viewers were quick to notice the sarcastic descriptions of how Indiyah was playing, with subtitles saying she was playing just a few notes "confidently".

But the more the performance progressed, the more savage the descriptions became as they read: "She plays Twinkle Twinkle Little Star badly."

Fans couldn't help but take to social media in droves to have a laugh at the descriptions.

One viewer laughed: "MY SUBTITLES SAID 'PLAYS THE RECORDER… BADLY'."

Another amused fan wrote: "Even the subtitles are laughing at Indiyah."

One fan wrote: "Who wrote these subtitles?" alongside a string tears of laughter emojis

Alongside a picture of Indiyah performing, one viewer noted: "Why are the subtitles doing Indiyah dirty? But why was this the funniest thing this season haha."

And the comments kept on coming from the fans of the hit reality show who praised the TV subtitle writers behind the scenes for their blunt audio descriptions as phrases like "shrill notes" continued to fill the ITV2 screens.

One wrote: "Whoever wrote the subtitles absolutely savaged Indiyah."

Another comment from a fan read: "NAHHH OWN UP, WHO WROTE THE SUBTITLES LMAO."

Whilst another viewer exclaimed: "The real talent is whoever writes these subtitles."