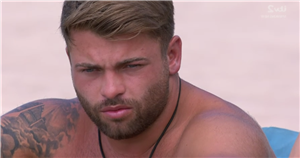 Love Island fans have been left angry after Jake Cornish expressed his hopes that "things will work out" with Liberty Poole after they split.

Friday 20 August's instalment of the hit ITV dating programme saw Liberty's bestie Kaz Kamwi, 29, and her partner Tyler Cruickshank, 26, return from their date with giant smiles plastered across their faces.

Upon their return, they noticed all the Islanders asleep in different parts of the luxurious Majorcan villa. After waking them up, Tyler went to lie down on his bed inside, where Jake joined him.

Not one to beat around the bush, the 24 year old water engineer explained that he had something to tell Tyler that had happened during his time away.

"Me and Liberty, we're done," he said point blank, to which Tyler responded in complete disbelief.

The estate agent, who was recently left in shock as Kaz thought babies breathe from their heads, then argued: "It'll all work out man," as Jake repeated: "Hopefully it'll all work out," before turning away.

Fans flocked to Twitter to voice their anger over the interaction as he they argued he didn't do anything to fight for his relationship with the 21 year old blonde beauty.

"Jake says he hopes it’ll work out yet didn’t even try to object when Lib ended it ??? #LoveIsland," one person wrote.

Another said: "Jake: "Hopefully it will work out mate" Also Jake: Lays on bed….#LoveIsland," as a third agreed: "If Jake wanted it to work out why didn’t he fight for her?? #LoveIsland".

While a fourth a dded: "If Jake really did want lib he’d be fighting for her and wouldn’t take no for an answer, but I guess that’s what got them to this stage in the first place #loveisland".

Jake and Liberty split on Thursday 19 August's episode of the hit ITV dating programme after the stunning star admitting she "can't do this anymore".

"What are we saying then, are we saying we're going our separate ways thens?" Jake questioned as Liberty played with the bracelet he gave her.

He then said: "It feels weird that I'm even saying this, but maybe it's best for us to go our separate ways and do what's right for the pair of us."

Liberty then said she hopes he finds someone that's "suits" him "better," while Jake apologised for they way he made her feel and acknowledged that he needs to work on that.

For all your updates on Love Island, sign up to our Factor 50 newsletter.