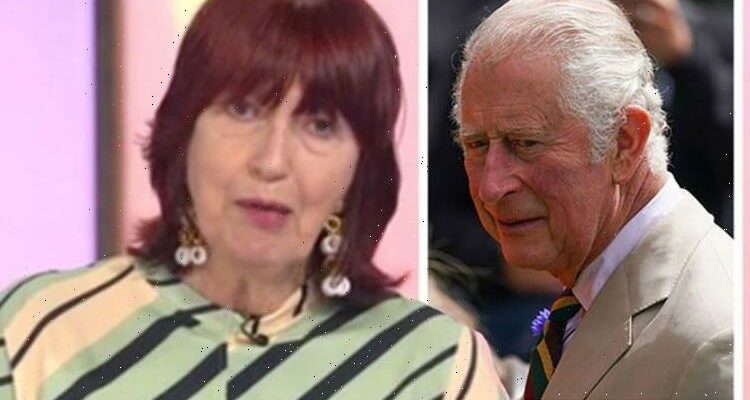 Janet, 74, joined Tuesday’s panel of Loose Women to share her thoughts on the latest royal news Prince Harry, 36, would be publishing a memoir next year about his life. The Duke of Sussex will give a candid take of his life as a senior member of the Royal Family, some of which has already been revealed in television interviews. However, the star of the ITV show explained now is not the right time to tell all his secrets and claimed he should wait until his father, Prince Charles, 72, has died.

“And there’s never going to be a good time really for him to come out with it,” she continued before Janet offered her take.

The journalist said: “A better time might be when his father’s no longer around.

“Speaking from my own experience, I wrote a memoir about my mother and why we didn’t get on.

“I waited until my mum and dad were dead and even then, there were people in my family that didn’t like what I wrote.”

The panellist added: “I wrote about my mother and I found it cathartic. I really enjoyed the process so Harry will benefit from writing everything down.

“He can’t stop telling us his feelings at the moment so this is going to be another encyclopedia of how he feels.”

Coleen Nolan, 56, also shared her view on the matter with the panel and she was more concerned about the Queen’s, 95, reaction.

Discussing if she wants to know what really goes on within the monarchy, she said: “Sadly I have to say yes I will because I am that nosy and I want to know.”

When his father’s no longer around

“However, if I was a friend or a relative, I’ve got to be honest, I’d say not now Harry, not now. Wait,” Coleen continued.

“I think it’s too soon with everything else that’s gone on. I definitely don’t think he should be thinking about things with his grandmother, our Queen, being the age she is and being hurt by so many things recently being said and done.

“I just think he is going to open a massive can of worms that he may not ever be able to be fixed. But I will buy it.”

Brenda concluded: “The worms are already out, you may as well just put the icing on the cake and just tell all.”

As well as discussing his life as a member of the Royal Family, the Duke of Sussex will also talk about serving in the military and marrying his wife, Meghan Markle, 39.

Fatherhood will also be touched upon in the memoir, slated to be an “accurate and wholly truthful” recollection of his past.

Announcing the news, the father-of-two said: “I’m writing this not as the prince I was born but as the man I have become.

“I’ve worn many hats over the years, both literally and figuratively, and my hope is that in telling my story.”

“The highs and lows, the mistakes, the lessons learned – I can help show that no matter where we come from, we have more in common than we think,” he explained.

“I’m deeply grateful for the opportunity to share what I’ve learned over the course of my life so far and excited for people to read a firsthand account of my life that’s accurate and wholly truthful,” Prince Harry concluded.

There has been no reaction from the Palace or members of the monarchy with regards to the Duke’s latest announcement.

The last time Prince Harry would’ve met with his father, Prince Charles, was at the funeral of his grandfather, Prince Philip back in April.