‘Escape Room: Tournament of Champions’ was full of twists and turns. Logan Miller spoke EXCLUSIVELY with HL about a possible ‘Escape Room 3,’ what you didn’t see in the movie, and that terrifying drowning sequence.

Just when you thought Ben was down for the count in Escape Room: Tournament of Champions, the survivor kept on fighting. Logan Miller reprised the role of Ben Miller in the Escape Room sequel, which is now in theaters. Logan starred alongside Taylor Russell, Holland Roden, Indya Moore, and more.

HollywoodLife got the chance to speak EXCLUSIVELY with Logan all about Escape Room 2. He revealed that another scene was actually shot first that revealed what happened to Ben under the sand. He also weighed in on Nathan’s fate and the future of Ben and Zoey. If there is an Escape Room 3, Logan said it’s time for Zoey and Ben to go full John McClane on Minos. 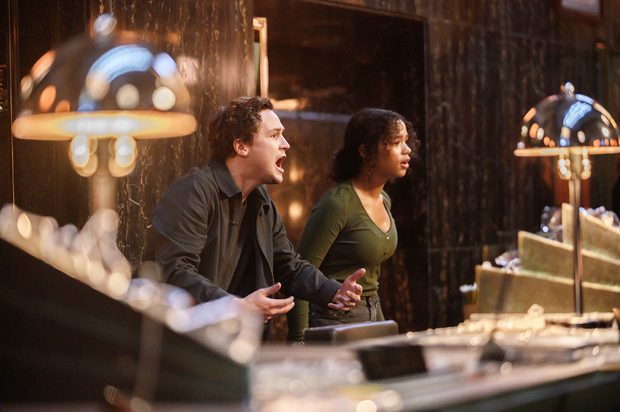 One of the big twists in the movie is that we think Ben is dead after he disappears into the sand during one of the escape rooms. Thankfully, he turns out to be alive. Were you told ahead of time that Ben was actually alive?
Logan Miller: Well, kind of the theme that comes throughout all of the second one is, if you didn’t see it, it didn’t happen. There’s a couple of other situations where that happens but every time that you don’t see something, you’re not sure if something has happened or not. And there’s always that element of surprise and Minos keeps you guessing along the way. What was funny too about what happens to Ben on the other side of the sand was a big question of what we were going to do. In fact, there was something shot that was completely different from what you actually see on the screen. The first situation was Ben was thrown into a sauna. He was thrown into this torturous sauna that brought him to such extreme temperatures that his face and body were almost melting. But that doesn’t bode too well for the next chapter, so I think we retooled and finessed and decided an element of drowning would be more appropriate.

Bouncing off the “if you didn’t see, it didn’t happen” logic, we didn’t see Nathan again. Was that discussed? Is he alive?
Logan Miller: Again, that’s open for interpretation. We’ll see what happens on the other side of it because, as you can tell now with these characters that might leave us, we don’t know what happens to them in the end. Maybe Minos is using them as pawns and tools, and they’re using them as bait for maybe somebody else to come into these rooms and save their loved ones or bring somebody else that’s searching for them who’s smarter and more agile to challenge the game all the more. I hope and pray that Nathan comes back. He was a kind soul. He was a little bit of a drunk, but we all make our mistakes in life.

I was pretty shocked to see Deborah Ann Woll’s Amanda Harper back. Were you surprised as well?
Logan Miller: I will say there was a completely different storyline when we were shooting this movie, and then we went into the edit, whatever was being told was not completely working for the test audiences that saw it. So we put our minds together and, in the midst of the pandemic, everybody kind of collaborated to say what’s the best thing that we can do to make this chapter pop. We did this three-week reshoot in Budapest where we changed a lot of elements and bringing Deborah Ann Woll into it was one of those added elements that I think is really fun and great for the fans of the first one. It’s great because we know she’s alive. However, she’s been manipulated and tortured into working for Minos. Everyone becomes kind of a lab rat, and at the end, we can’t take it anymore. We want to try to beat them at their own game, but that doesn’t quite happen on the plane.

Zoey and Ben are very much at the heart of this movie. What are your thoughts on their relationship? Do you think they could make a romantic relationship work?
Logan Miller: I definitely think that Ben has a true love for Zoey in a friendship way but also potentially in a romantic way. We maybe explore that a little bit in the movie, but then it gets to a point where we get thrown into the lion’s den pretty rapidly, so there isn’t really much space to explore that. Maybe there will be in a second one if we make it off that damn plane. I think the good thing is their bond is very tight. When they were in the trenches together, they have that courtship of just knowing what to do in these certain circumstances. They have a bit of a shorthand if you will, and if they didn’t have each other, I think that it would actually lead to both of their demises. This duality is very important in the teamwork aspect of that. And, hey, if we get off that damn plane, what else is there to do than make out?

What was the drowning scene like for you? How did you film that?
Logan Miller: It’s really hard to fake drowning because the element of water is difficult for a CGI team, I’m sure, so they just decided to throw me in a big ass tank and just pumped me full of water. It’s hard to fake the water and then it’s hard to fake the drowning. We took every safety precaution we could. But at the end of the day, I’m gasping for air, I’m making sure that I’m trying to survive while roaming through all of that. It does mess with your psyche in a way. I’d say that one was definitely the most torturous. I’ve told many people this: I know that I’m in a movie, but my body doesn’t know that I’m in a movie. My body was reacting the way that it would if it was in a situation of drowning. The adrenaline’s there, I feel like I’m losing my breath and stuff, and then once you get out of it, it’s just like pure exhaustion, muscles aching and stuff. Thank God that we had some nice massages afterward because my body desperately needed it.

I could not imagine even treading water for five minutes. I would be so exhausted.
Logan Miller: Hey, it helped me lose weight due to the stress and the survival. I mean, when I did the second one I think I lost like 10 pounds. This is a great exercise and diet for anybody — just get tortured for three months.

The ending of the sequel leaves things wide open for a third movie. Has that been discussed yet?
Logan Miller: Again, I think that we don’t want to put the cart before the horse because it’s a situation of we want to be there for the audience, but we’re not going to push something if people don’t respond well. We want to definitely see how people respond to the second one, and then we’ll have the conversation from there. I hope that once Ben and Zoey get themselves out of this plane situation that it’s no more Mr. Nice Guy. We’re so jaded and disgruntled that it’s time to go John McClane. They’ll probably go into a situation where they’re going to get some new people and some old blood maybe at the same time. I want to be behind the scenes, and I want to be in those air vents saying “yippee-ki-yay motherf**ker” and taking them down.

Escape Room: Tournament of Champions reunited you and Taylor Russell. What has it been like to be on this journey together?
Logan Miller: She’s one of the best partners to have in this crazy moment. She’s a very amazing professional, always on top of it, always willing to collaborate and talk through anything. That’s just made it all the more fun. We’ve got all of the war stories to tell now. We could step back and look at the craziness that is our careers and it’s great. Once you’ve done an Escape Room movie it’s like a tattoo. It’s a bond. It’s something that you’ll always share together. Taylor is the best one to have there as far as that partnership and making these movies.