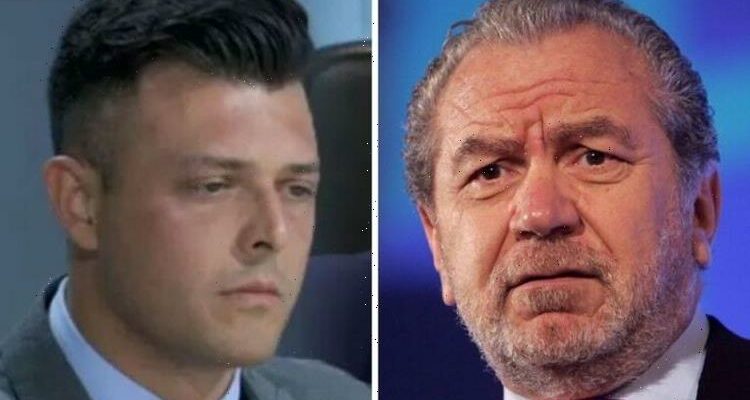 The Apprentice: Harpreet wins the 2022 series

Lewis made it to the final five in series 15 of The Apprentice, but unfortunately, his time on the show has been tarnished by a spat he had with business tycoon Lord Sugar as the episodes were airing. The 75-year-old called the candidate out on Twitter for exposing his “horrible” tattoos. Speaking exclusively to Express.co.uk, the 28-year-old explained the interaction had left him “feeling down” as he had once looked up to the business magnate.

He added: “Thank you everyone that took the time to show some support for my ‘horrific’ tattoos and pointing out no one has the right to judge you or your body.”

Lord Sugar shared the post and commented: “Lewis your tattoos tell your story. What are you a Kindle. (sic)

“You have the right to do what you want to your body. I have the right of an opinion. I say they are horrible. When you’re 50 on the beach you’ll wear a T-shirt. You will be an embarrassment to your kids.”

Speaking recently to Express.co.uk about his time on the show and his verdict on this year’s candidates, he opened up about the “unwarranted” moment and how it left him feeling.

When asked about the worst part of being a part of the series, Lewis explained: “Tattoogate was my worst moment.

“It left me feeling so down, sad and deflated. Like, I looked up to Lord Sugar until he decided to publicly ridicule me.

“I’d read his autobiography and his father-in-law had judged him his entire marriage, I never expected someone as successful as that to s*** on someone that was just trying to change their stars.

“It was completely unwarranted and to be honest surprised me immensely.”

Lord Sugar is notorious for speaking his mind on his Twitter account and has faced some backlash for controversially doing so over the years.

Summing up his experience, Lewis reflected: “I am very glad to have been a part of The Apprentice.

“For me, it was a lifelong goal to become a business owner.

“I just knew I didn’t fit in and a standard 9-5 would never work for me. So to be accepted onto something seen as the UK’s best business show, it was a time for me to test out if it’s something I could do.

“Was I a business owner in the making, or just a dreamer? I luckily found the former to be true and quickly realised there is no one-size-fits-all personality when it comes to an entrepreneur.

“And all you had to have was determination and unwavering grit.

“Since leaving and going on about my life, I now understand it was a moment of realisation getting through to the final five. I felt I could do anything!”

Since his stint in the BBC show, Lewis has continued to work hard on his business venture Hiddn Travel, which the website describes as aiming to provide “stylish escapes for young and inspired travellers”.

He told Express.co.uk: “Following the show I actually fully revamped the initial business idea for Hiddn Travel and then we ended up having Covid hitting us so it ended up lying dormant since.

“Hiddn Travel is now looking set to launch its first trip in 2023.”

The Apprentice is available to watch on BBC iPlayer.