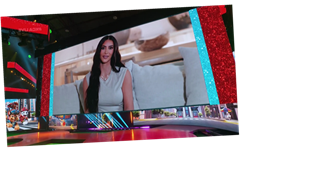 Kim Kardashian shared something exciting at the Kids' Choice Awards!

While making a virtual cameo at the awards show on Saturday, the Keeping Up with the Kardashians star, 41, teased an exclusive sneak peek at the upcoming animated film Paw Patrol: The Movie.

Joining Kardashian in previewing the new film were Tyler Perry, Yara Shahidi and Marsai Martin, who all lend their voices to the animated film.

"We had such a great time working on this movie. My kids can barely believe it when I said I was going to be in it," the mom of four said.

Shahidi added, "There's so going to be so much fun, action and adventure."

The majority of the stars announced in the cast will voice new characters specifically written for them in the film. Meanwhile, the recurring cast — including dogs Chase, Marshall, Rubble, Zuma, Rocky and Skye — of the animated series, which debuted in 2013, will be heavily featured in film, currently set to be released in August.

"Kim's character is a new character being created for her specifically in the film," a source previously told PEOPLE.

"I'm officially cool mom now to my kids! Paw Patrol We're On A Roll!!!" Kardashian tweeted at the time along with the cast announcement.

Kardashian's appearance comes just under a month after she officially filed for divorce from Kanye West after nearly seven years of marriage. The two share four children: daughters North, 7½, and Chicago, 3, and sons Saint, 5, and Psalm, who will turn 2 in May.

Sources have told PEOPLE that while Kardashian is disappointed about the dissolution of her marriage, she's determined to move forward while focusing on her kids and career.

According to one source, Kardashian and West, 43, were not always on the same page when it came to raising their children.

"They have a different vision of the world and how their kids should be raised," said the source. "Kim will always support Kanye and his causes and encourage him with their kids, but her future with work, family and life in general are strictly up to her."

"Kim will continue with her projects, and so will Kanye," the source added.