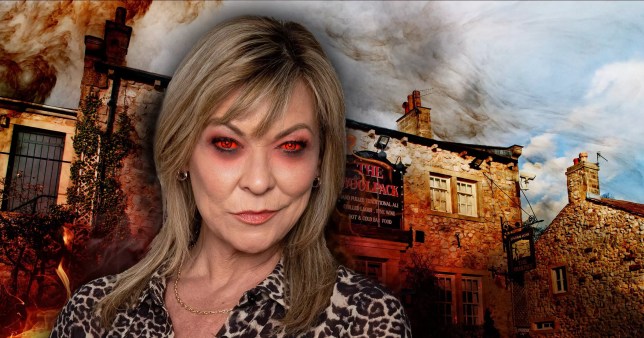 Harriet’s been a bit well, interfering as of late, taking advantage of the trouble Kim and Will (Dean Andrews) have been experiencing with Dawn (Olivia Bromley) and her family.

After Dawn, Billy (Jay Kontzle), Lucas and Clemmie left Home Farm, Dawn felt as though Will was choosing Kim over his own family.

This set Harriet’s new storyline in motion as tonight, she found Will and reminded him that if he goes ahead with the wedding, Dawn will not be impressed.

When Kim discovered Harriet had been poking her nose into her business, she made her way to her home and gave her quite the warning.

Picking up a Bible, Kim read out the verse:

‘I pursued my enemies (in this case, Harriet) and overtook them and did not turn back until they were consumed. I thrust them through so that they were not able to rise; they fell under my feet. They cried for help, there was none to save.

‘They cried to the Lord, but he did not answer them. I beat them fine as dust before the wind, I cast them out like the mire of the streets.’

Harriet rightly pointed out that if it’s a threat, it isn’t a very good one as it’s ‘about having God on your side’, but Kim told Harriet that ‘round here, I am God’…and she most certainly isn’t on Harriet’s side.

With the 50th anniversary just weeks away, this scene has told us if Harriet continues to interfere, Kim won’t hesitate in getting her revenge.