In late June, KiKi Layne’s team shipped her a pair of heels for virtual on-camera junkets—her first in weeks, given the COVID-19 stall—along with her first gowns of the season: Dior, one of her personal favorite designers, and Cushnie, a Black-owned luxury brand, one of several she’d asked her stylists to support. But the actress had spent most of these past few months like the rest of us: stuffed into leggings and T-shirts, wary of any non-sweatshirt material. She actually laughed at the heels. “Oh,” she told her team, “you’re hilarious.”

She opted, instead, for a pair of Netflix-branded flip-flops she’d picked up at the Golden Globes after-party in January. They seemed fitting; after all, the elegant indie star was working to prove her versatility.

“It’s amazing to me how quickly the industry will try to put you into a box,” Layne says. “It’s like, I did Beale Street. And they decided now, all of a sudden, ‘Oh, okay. KiKi Layne does those little quiet indie dramas.’ I’m like, ‘No! That’s just where I got started.’”

But she gets it, sort of. She knows you might not expect to see the lead actress of an Oscar-winning drama turn around two years later and do a buzzy action movie for Netflix. She understands going from the awards fervor of If Beale Street Could Talk to Native Son to The Old Guard might seem like an unorthodox path. But she’s curious why that is. If Chris Evans can straddle the line between Captain America and indie darling, why not her? 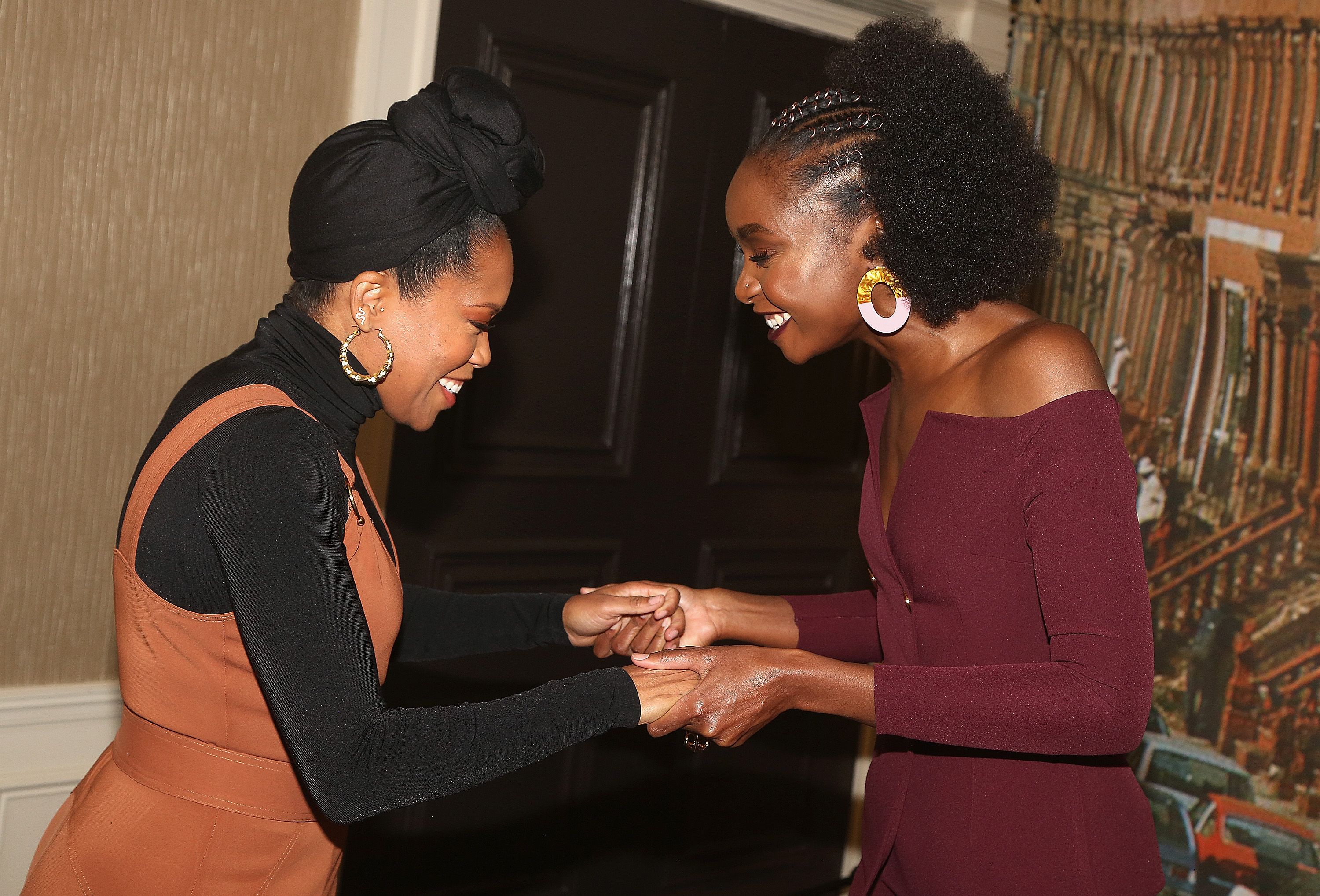 The Old Guard was exactly the project she was looking for, coming off the dazzle (and the pressure) of adapting James Baldwin’s and Richard Wright’s masterworks. She sought a different sort of challenge, a demonstration of versatility that didn’t compromise complexity in the face of flashy stunt work. She’d show that she could make an action hero raw and bold and Black and multifaceted. In came filmmaker Gina Prince-Bythewood, and Layne needed no further convincing.

Prince-Bythewood, director of Love & Basketball, The Secret Life of Bees, and Beyond the Lights, was stepping into her first role directing an action film, adapting Greg Rucka’s graphic novel The Old Guard for Netflix. The story, with a screenplay by Rucka, follows a group of immortal men and women who heal instantaneously each time they’re wounded (or even killed). Cursed with longevity but armed with superior survival skills, they become some of history’s greatest changemakers, stopping world wars and rescuing VIPs over the course of centuries, all while evading capture. They’re finally edging toward burnout when they meet Nile (Layne), a U.S. Marine who’s only just discovered her healing powers. Their leader, an ancient warrior named Andy (Charlize Theron), instructs Nile in the pros and cons of immortality—and reveals it might not last as long as the word suggests.

It’s amazing to me how quickly the industry will try to put you into a box.

Although Nile was originally more of a supporting character in the graphic novel, Prince-Bythewood pushed to make her a co-lead alongside Theron’s Andy, cementing the two women as the film’s emotional and narrative center. She also made it clear these two actresses would provide the majority of awe moments in the action scenes. They would be the heroes: a Black woman and her older, hardened mentor.

“That was the very first thing that got me excited about this project,” Layne says. “I didn’t know anything else about it. All I knew was it was called The Old Guard and that Gina was directing it. I was sold just based off of that, just because I—looking at what Gina has done over the years, her commitment to telling Black stories and putting Black women at the forefront? I mean, it’s ridiculous, it’s not like we’re not actually out here doing these things and [living these stories]. You just don’t ever see it on film or television.”

Which might explain why watching Nile feels like an out-of-body experience. You’re witnessing something that should be familiar, yet somehow isn’t. Ask yourself: When’s the last time you saw a Black woman in the leading role of a major action film? Critically, Nile is neither a femme fatale nor a Pam Grier pastiche. She does not share the controversies of heroines that came before her: Catwoman’s sly sex appeal, Black Widow’s infertility, or even Wonder Woman’s gentle ignorance of the modern world. She is neither tokenized nor whitewashed nor weakened. She’s a match to Theron, whom many consider Hollywood’s leading female action heroine following her breathtaking stunts in Mad Max: Fury Road and Atomic Blonde. 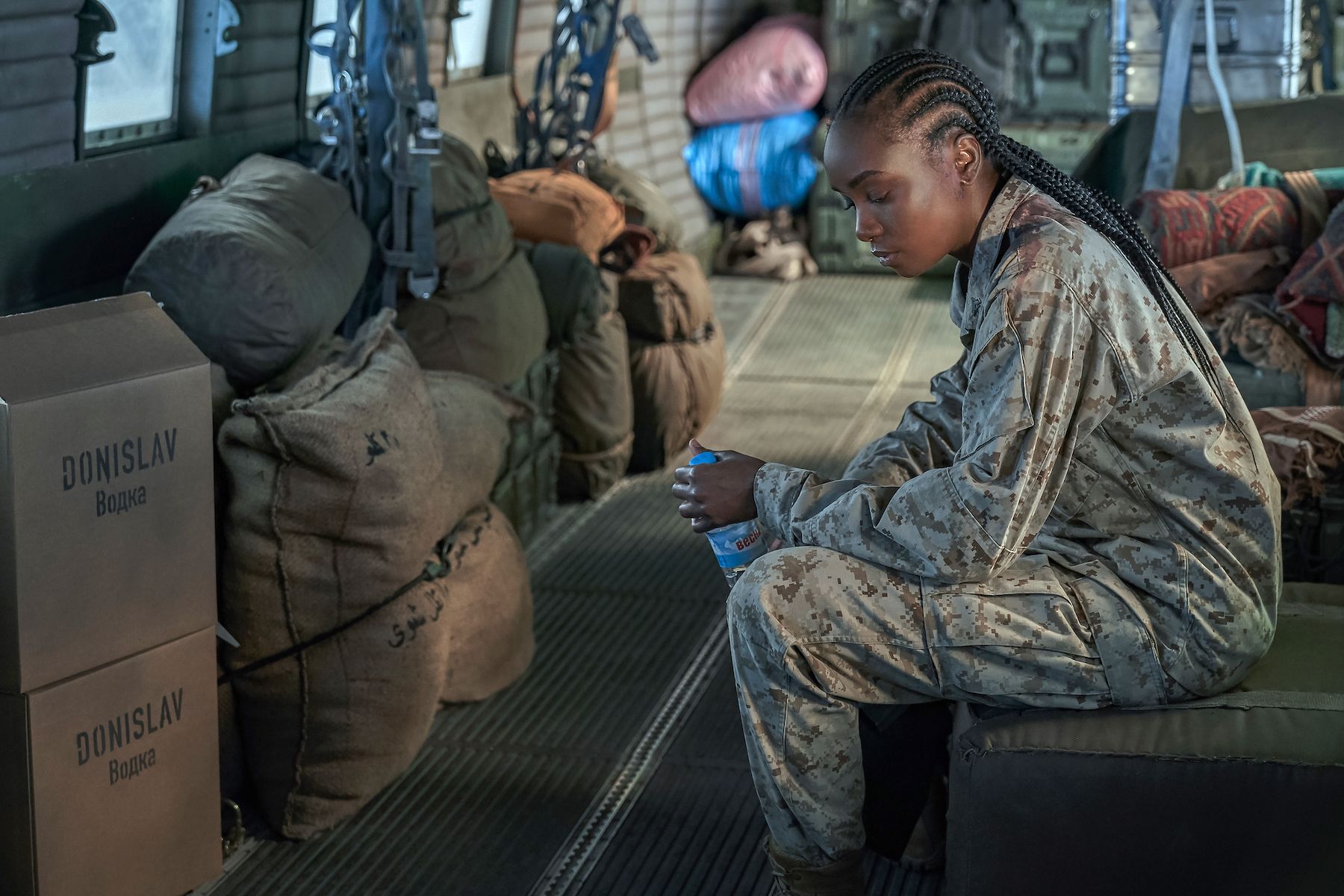 As Layne puts it, Nile has no “superpowered lasers coming out of her hands.” She wears T-shirts and boots, normal civvies. She speaks English, Spanish, and French. She’s proud of her Black family, “descended from warriors.” She’s a Marine—a good one, from the looks of it—with a stunning degree of moral clarity. She’s grounded. She feels the pain of every bullet, every punch. And Layne had to train for every blow.

She started working out months in advance of filming. There was tactical training, military training, weapons training, choreography training. There was getting in the gym every day, building muscle. There were protein shakes, endless bowls of chicken and rice and broccoli, none of which ever actually satiated her hunger. “I had never done anything like this before, physically,” Layne says. “There definitely were some days where I was just like, ‘Girl? Take your ass back to your little, small independent movie.’ But when it was fun, though, it really was.”

And anyway, getting a few blows in on Theron didn’t seem like such a terrible thing, especially given what it represented: a Black woman with autonomy, with true power. The irony of using the old guard as a title is that the expression is most often a descriptor for unwavering people in power: rich white men who refuse to consider change. The Old Guard itself is, in part, about making change. If you’re forced to live forever, what other choice do you have than to make the world a better place? 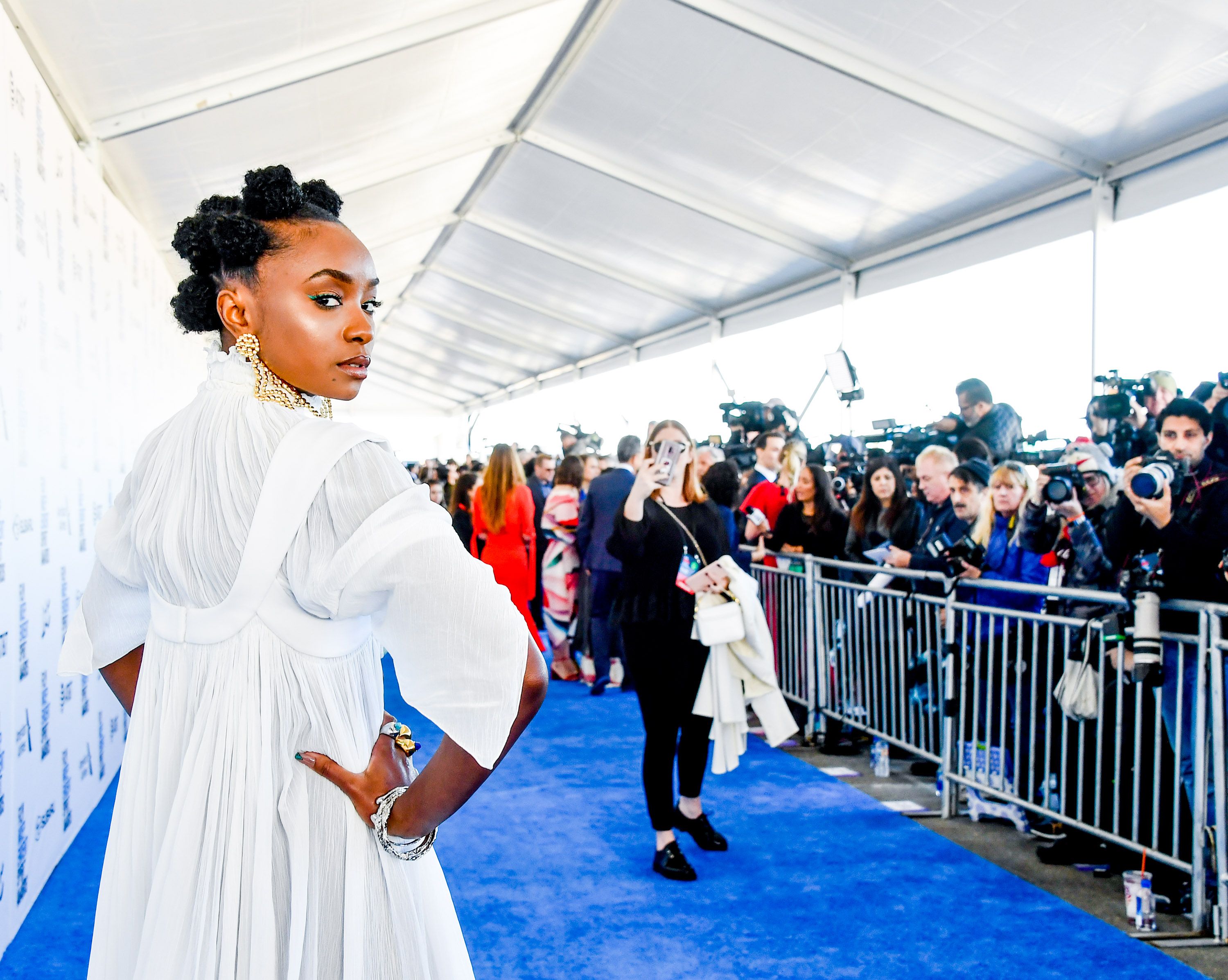 Layne recognizes that parallel more than most. Shortly after the tragic murder of George Floyd and the subsequent protests that spread across the world in June, she posted a video of Nile to Instagram and wrote the following.

“I know I haven’t really been on IG recently (although we all know I don’t be on here like that period), but please know that even when I am not present on social media, I am always fighting to be present in rooms, spaces, conversations, and roles that Black women, especially dark skinned Black women, have historically been left out of. Trying to bust through doors and walls in these industries in a way that they wouldn’t be able to put the wall back up even if they tried. Because there’s no point in making it through the door, if you’re not gonna make sure it stays open for more of us to follow. I’ve been committed to attacking the industry and my life in this way since I was writing my college application essays.

This time [has] allowed me to start thinking about how I create the type of work that I want to see.

“And I will always try my best to honor the fact that no matter where I go in this industry and my other ventures, my big break was through the words of James Baldwin, followed by the words of Richard Wright. That is not lost on me. I am always thinking of, supporting and fighting for my people.”

When asked what “attacking the industry” means in light of the recent Black Lives Matter movement, Layne says, “I’m already super, super focused on looking for the types of things that I want to do. And if I don’t see it, then I’m creating it. As crazy as all of this has been, I’m grateful that this time … it’s allowed me to start thinking about how I create the type of work that I want to see. And not just for myself, but for other artists of color in front of and behind the camera.”

It’s when you hear Layne talk like this that you understand how she—at the time, a relatively unknown actress—beat out 300 others for the role of Tish Rivers in If Beale Street Could Talk. Why her family (which makes a cameo on Nile’s phone lock screen in The Old Guard) never doubted the time nor the money it would take to send Layne through acting school. And why major designers and stylists all want to style her in iconic hairdos and “Gucci down 2 tha socks.” No one can predict the trajectory of her filmography—only that it’ll be fun to watch. 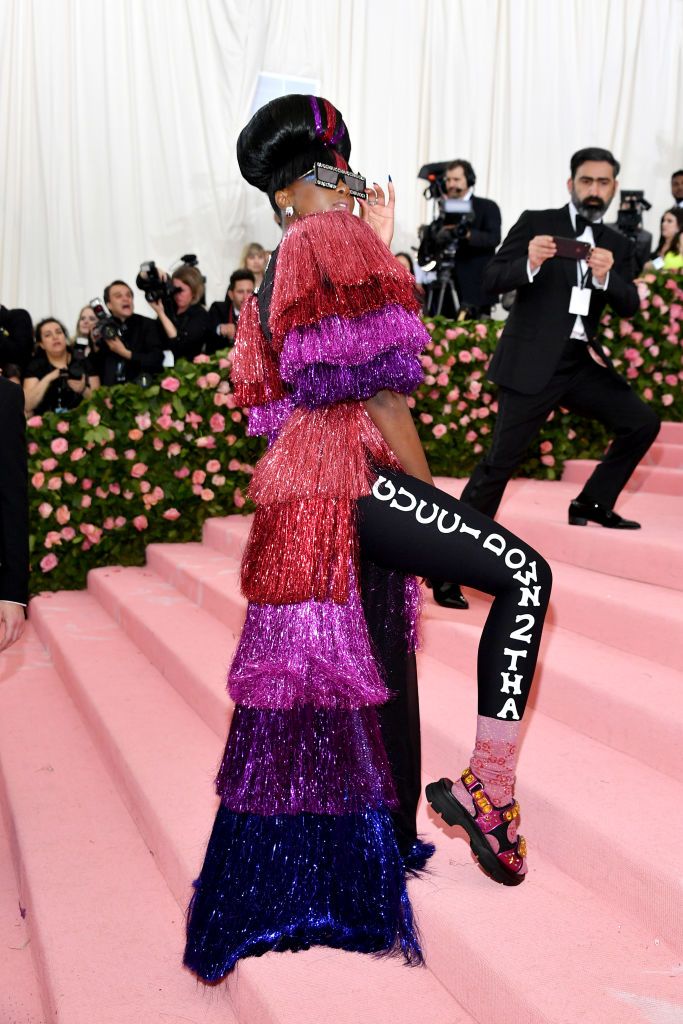 That said, Layne does have one promise to make: If The Old Guard comes back for a sequel, she’ll be on board. “I love this character,” she says. “I love this world. I love all of the people that I got to work with. This cast and the whole team was super dope. I think we all just are over here crossing our fingers, praying to everybody and they mama: Watch this movie on Netflix when it comes out.”

And when the time comes to promote Nile on a real red carpet, well, then she’ll break out the heels.