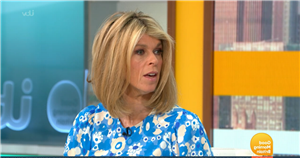 Kate Garraway was left mortified after Adil Ray put her on blast for presenting Good Morning Britain while wearing flip flops during the national heatwave.

During Friday’s (June 17) instalment of the popular ITV breakfast show, the 55-year-old broadcaster made sure to keep cool while she presented the three-hour long programme in the sweltering heat.

But the star was devastated after her 48-year-old co-star ratted out her fashion faux pas live on air as the camera panned down to her freshly manicured toes in a pair of blue flip flops.

Completely embarrassed at her choice of fashionable footwear, she immediately hit back at the broadcaster as she remained cool in a breezy blue dress and matching airy sandals.

Adil exposed the star's bare feet live on air, saying: "I've got flip flops to the left of me and knobbly knees to the right of me and I'm here stuck in the middle."

As she attempted to hide her bare feet from the camera, the mum-of-two confessed: “Yesterday, I treated myself to a pedicure for the first time since Derek got sick.”

Her colleague chuckled beside her as he went on to admit he didn’t have a problem with her presenting in her bare feet but instead revealed he had a strong disgust around armpits on show in the warmer seasons.

He explained: “I don’t like armpits, I don’t like seeing them on show” as Kate replied: “There is a lot more skin on show, a lot more midriff's visible.”

It comes after the doting wife hit back at Adil after he accused her of sleeping in dirty bedsheets covered in bed bugs.

During Thursday's (June 16) edition of the early morning programme, the TV presenter confessed she woke up covered in mosquito bites due to the soaring temperatures across the country this week.

As she explained how she struggled to get a decent night's sleep, the broadcaster asked her colleagues how to reduce the number of bites in the evening.

But it was clear to see she was left up in arms with the response she got from her co-host after he asked her is she had changed her bed sheets recently, noting the bites could actually bed from bed bugs.

Kate asked: "Am I the only one who got eaten alive last night? I had the windows wide open and this morning I am covered in massive bites, like mosquito bites.

"I'll show you later Adil, I was trying to think of a place I could show you on air but I can't, huge bites – let me know, is it just me or is it one of the blows of hot weather?"

It was at this point that Adil asked her: "When was the last time you changed your bedsheets?"

Humiliated at his question, she shouted: "Shut up! How rude, how rude!"