During his stint as a writer for Seth Meyers, comedian John Mulaney pondered what it would be like to have this own talk show.

Mulaney took a writing job on Meyers’ late-night show during the pandemic because he craved artistic interaction and engagement. Covid-19 (coronavirus) eliminated any standup touring opportunities and productions were still in the reboot stage. The gig with Meyers was short-lived because Mulaney ended up checking himself into rehab in Dec. 2020. He has since completed treatment and is working on his recovery. But prior to seeking treatment, he contemplated what a Mulaney-led talk show would look like. Of course, the show he conjured was very “Mulaney-esque.” 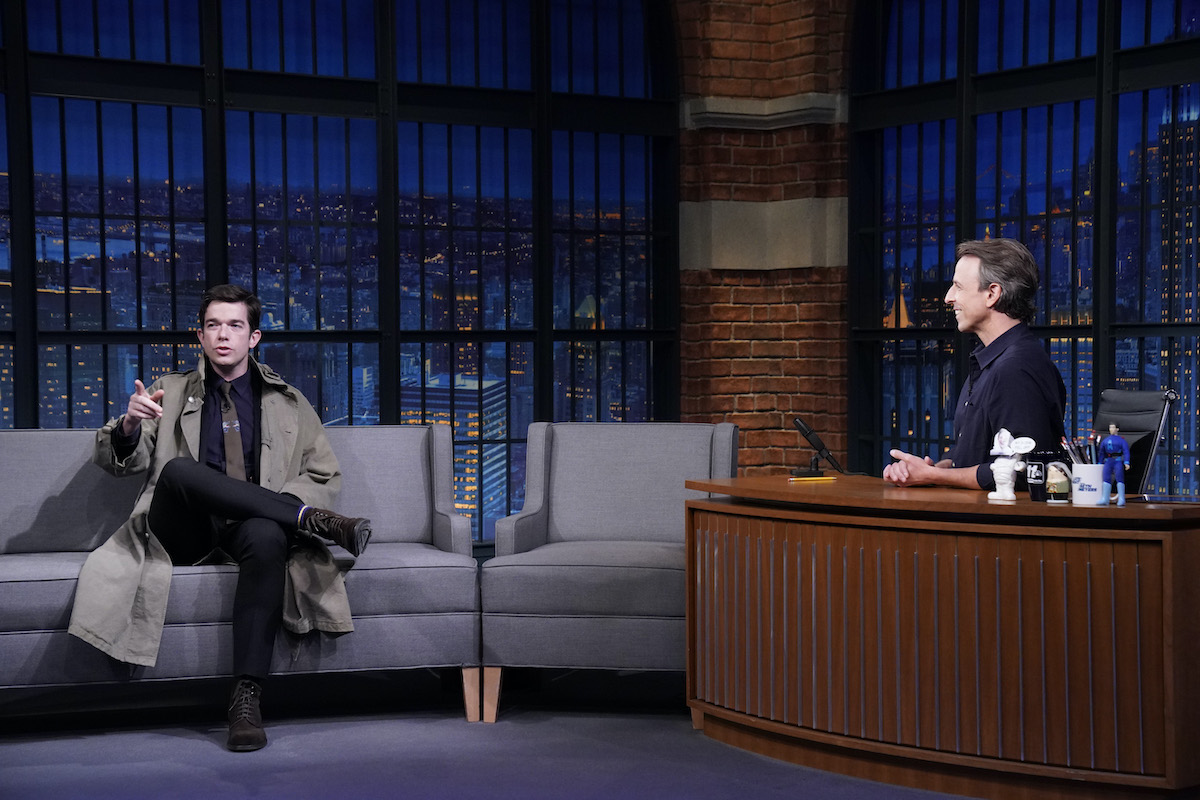 Mulaney said being a writer and part-time correspondent for Meyers allowed him to reflect on what it could be like if he had his own talk show.

“I don’t know if the persona I’m playing in those segments would get his own talk show,” he told GQ in 2020. “But I always wanted to do a talk show where the guest is always someone from a job that I don’t understand. I’d love to interview a dog catcher and be like, ‘What is that like? How do you feel about yourself? I’m not judging, but I am a little. How do you feel rounding up dogs and taking them to the pound?’”

“I had two ideas for a talk show once,” he added. “And by ideas, I mean I thought about them in the privacy of my own room. One would be just interviewing people who do anything that interests me. And I don’t mean like on the ground and I’m watching them do their job. It would be like a talk show set and they’d come out and there’d be a band and so forth.”

“The other thing was just to have only elderly people on—which I obviously would not do now due to the risks—but I just thought it would be great to talk to old people,” he continued. “Especially if they were comfortable talking about being at the end of their lives and just go, ‘Did you like it? Did you not?’ Ideally, maybe like a four-year-old and an 84-year-old, or a 40-year-old and a 94-year-old would be our ideal lineup.”

Why did John Mulaney take the writing job for Seth Meyers?

Mulaney also discussed why he took the job at Late Night With Seth Meyers. “It’s really fun and it’s really fun to go into an office and work with friends,” he laughed. “It is not simply a case of structure. But yes, it is nice to have an office to go to where it’s super safe. After doing Saturday Night Live, I thought, I really miss going into a workplace. When I realized I had the very lucky opportunity to go into Seth’s show, I was stoked because I realize not a lot of people can recreate that or have that interaction right now. So I’m extremely lucky to be able to.”

He admitted that he prefers to work with others, which was challenging during the pandemic. “The idea of sitting alone writing, maybe someday I’ll have my ADHD under control and will be able to do it,” he shared. “I’m normally on stage with an audience or with other people writing Documentary Now or recording Big Mouth or these movies. I’m not Philip Roth. And I know you think I’m Phillip Roth, Frazier, but I’m not.”