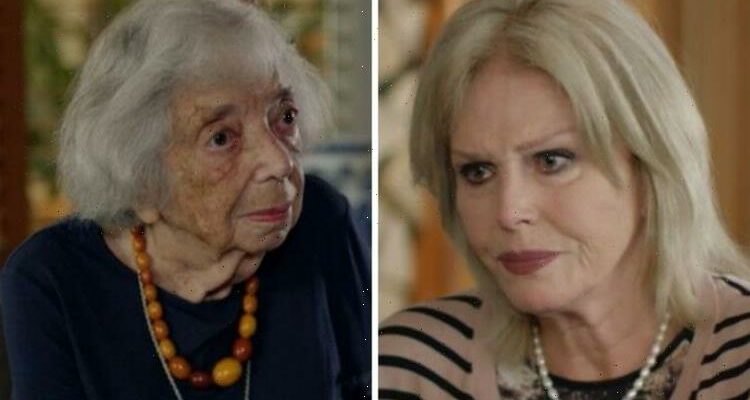 As part of Joanna’s ITV travel documentary, the actress travelled to Berlin to learn more about the culture and history of the country. During the programme, which aired on Thursday night, Joanna had a tour of Germany’s capital on the back of a motorbike with an all-girl biker group.

However, towards the end of the programme, Joanna spoke with Holocaust survivor Margot, who shared her memories from that horrific time.

Margot began by speaking about her childhood where she told Joanna at 12-years-old, she lived with her brother and her mother.

Although, her world turned upside down when she returned home from school one evening in 1943.

“When I came it was dark,” she recalled as she showed Joanna the star she wore: “Men stood in front of the door, this was the star that I wore.”

She continued: “I took my handbag and covered it and passed him… I expected my mother to be there.”

However, at just 12-years-old, Margot was left at home alone as her brother and mother had already been taken by the Nazis.

Joanna struggled to hold it together as Margot remembered the message her mother had sent to her.

“My mother left the words with the neighbours, ‘If you see my daughter, tell her she should try to make a life’.”

“Throughout the years I was able to get through,” Margot emotionally told the actress.

Margot spent 19 months in hiding before she was eventually captured by the Nazis where she was sent to a concentration camp in Czechoslovakia.

After the war, Margot went on to explain being approached by a man who did not know.

“How could I recognise this man? No hair, pyjamas?” Margot recalled as tears formed in Joanna’s eyes.

Margot had later discovered both her mother and her brother had been murdered by the Nazis.

“I made it, I am lucky and I talk for the ones who cannot talk anymore,” Margot added.

“What was done we cannot change anymore, but it should never happen again, for you, not for us, for you.”

As the Absolutely Fabulous actress reflected on her chat with Margot, she broke down in tears again.

“It’s absolutely overwhelming,” Joanna sighed as she tried to speak through tears. “It was the star.

“We all knew they wore stars but I had never seen one before. What she is doing is so important because we must never forget.

“People would go, ‘Why would we forget, we remember all the time?’

“We don’t, we have a way of eliminating the past but this is far too important.”

Joanna Lumley’s Great Cities of the World is available to watch on the ITV Hub.