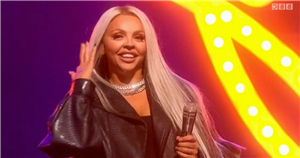 Graham Norton fans have accused Jesy Nelson of “lip syncing” during her first live performance since she left Little Mix in December 2020.

The blonde bombshell took to the stage to perform her new hit single, Boyz, complete with an entire hip hop dance section where Nicki Minaj’s rap was played.

But it’s fair to say it wasn’t entirely well-received by viewers, as fans accused the solo artist of “lip syncing” throughout the chart-topping song.

After her live performance, Graham welcomed her to the stage where she joined the fellow stars and spoke about how it felt to perform for the first time as a solo artist.

Once she took a seat, the 58-year-old asked her: "How did that feel? Your cherry is gone now. First solo performance done."

As she settled in, she responded: "I'm not gonna lie, that is the most I've ever s**t myself. That was very scary."

Graham went on to ask: "Did it feel weird just being Jesy Nelson?"

To which she replied: "A little bit but when I've got the dancers I feel like I'm still in a group, like it still feels like family."

The TV host went on to broach the subject of her separation from the band and how their relationship is now that she has released her own music.

Graham quizzed: "And when you left Little Mix it seemed all quite amicable and now it seems to have gone a bit sour. What is it like now? Are you still talking to any of them?"

The singer answered honestly: "No, we’re not talking anymore.

"I know it’s sad but, honestly, there is no bad blood from my side and I still love them to pieces. I just wish them all the best, genuinely."

He added: "Well, I hope you get past it because to have experienced that is such a special thing. "

To which she agreed: "One million per cent and I literally loved my time in Little Mix and we’ve got the most incredible memories together, we laughed so much.

"But I think it’s just one of them things that it just needs to take time, but yeah, who knows. I still think their the sickest. To me, they’re the sickest girl band in the world."

Viewers took to Twitter the express their disappointment in the singer's latest number and shared their suspicions as to whether or not she was singing the song live or "miming."

One user penned: “Of course she’s lip syncing and to be honest the song is s**t … it’s just the music video that made it look good.”

Another agreed: “You could at least try to lip sync, Jesy,” as a third argued: “In fairness to Jesy Nelson, this is a better lip sync than last night’s #DragRaceUK.”

A third chimed in with: “Miming!!! Bloody hell jesy, Little Mix shaking their heads watching this …"