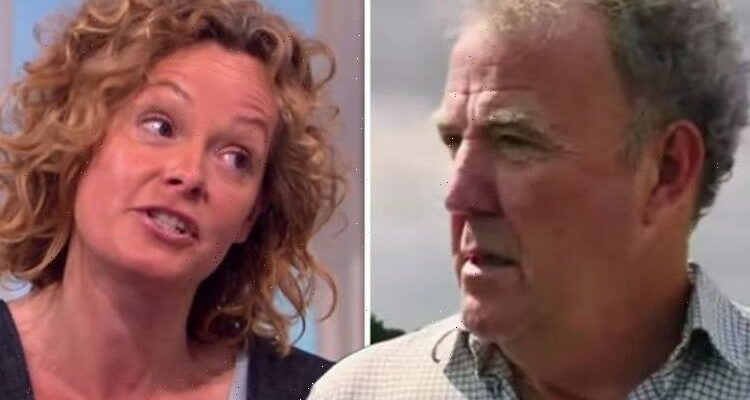 Jeremy Clarkson gives insight into ‘busy night’ on the farm

Jeremy Clarkson lightheartedly hit out at former Springwatch presenter Kate Humble in a recent interview discussing his Amazon Prime Video series Clarkson’s Farm. The Grand Tour host explained he wanted to give viewers a different insight into British farming with his show but in an exclusive interview with Express.co.uk, Kate shared her thoughts on his comments.

The former Top Gear presenter told Express.co.uk: “There are two ways farming is covered (on TV).

“Ordinarily, one is American industrial farming and we’re told, you know, the news reports of these awful huts for cows that stretch for hundreds of hundreds of acres in every direction.

“And then the other is Kate Humble with a newly born lamb in fresh straw.

“And the reality is that most British farming is sort of in-between – it’s actually pretty good.”

Kate was asked whether current farming programmes showcase a true representation of farming in the UK.

She replied: “Yes I think they do because Kate Humble holding a lamb is part of British farming.

“I have to say I haven’t seen the series, but I will also say that he has done a tremendous service to farming in Britain,” she continued.

“He has shown that it doesn’t matter how much money you have, it’s b****y difficult.

“The people who farm our landscape, and who produce our food on our behalf, are incredibly skilled and incredibly hard-working.

“I think the thing that we seem to have forgotten which is so weird is that we wouldn’t have anything to eat [without farmers],” Kate noted.

“It doesn’t matter whether you’re vegan, you only eat meat or a gentle mixture of everything in between.

“We only have food, because people produce it for us, and those people are farmers.

“We don’t seem to appreciate how much they do and how hard their job is.”

“I think any farming programme that sheds light on the complexities and challenges facing our farmers to keep us fed is really important,” she added.

“I think there’s space for all of them, and if it means me cuddling a lamb or him driving a great big tractor, it doesn’t matter, they’re both equally important.”

Kate is currently presenting a new season of A Country Life for Half The Price on Channel 5.

In Tuesday’s instalment, Kate meets married couple Matt and Uzma who have decided to leave their city lives behind to start a new life in Gloucestershire.

A Country Life for Half The Price continues on Channel 5 on Tuesday at 8pm. Clarkson’s Farm is available to stream on Amazon Prime Video.