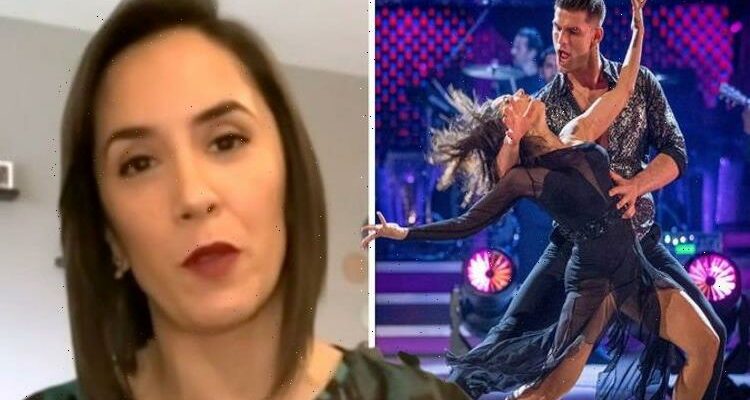 Strictly: Janette Manrara says dance in final was ‘so special’

Saturday’s Strictly Come Dancing final saw EastEnders actress Rose Ayling-Ellis and her professional partner Giovanni Pernice take home the Glitterball Trophy. The dance duo won the series after beating TV chef John Whaite and his dance partner Johannes Radebe. However, the final also featured a special return to the BBC dance show from former Strictly pro Janette Manrara. The dancer has spoken out about her performance on the show, explaining why it was so emotional for her.

On Tuesday morning, Janette was welcomed onto ITV’s Good Morning Britain to talk about her emotional Strictly return.

The dancer chatted to hosts Adil Ray and Charlotte Hawkins about the performance.

As a former Strictly contestant herself, Charlotte was keen to know how Janette felt about returning to the dance floor with Aljaz.

The presenter asked: “How was it getting back on the dance floor together?”

Janette insisted it was a very emotional experience, saying: “It was so special.

“I mean, there were definitely tears in our eyes when we finished doing that.

“I don’t think I’ve ever been more nervous on Strictly Come Dancing than I was dancing with Aljaz again that night.

“You know, I haven’t danced in a long time because I’ve been doing It Takes Two, which is exciting and other projects.

“But, dancing is at the core of what I am, I’m a dancer,” she explained.

The star confessed it felt very special to be back on the iconic Strictly dance floor for a number of reasons.

“To be able to come back and do it, not only with Alijaz, but also on the Strictly dance floor, on the Strictly final and with Ed Sheeran, it was definitely one of those pinch yourself moments that you just will remember for the rest of your life,” Janette said.

“It was a big deal to come back, you know, I almost thought ‘Ohh, do I still have my dance legs? They’re still in there,’” she laughed.

Janette insisted she was “so grateful” to the Strictly team for allowing her to have that special moment on the show.

The dancer enthused: “There’s something about dancing with Alijaz that nothing else in the world touches.

“So, to be able to share that with everybody on such a special night was awesome,” she remarked.

“What is so special about Strictly Come Dancing? What in particular do you get from it?” Adil asked.

“It’s the love and the joy that it brings to everyone,” Janette insisted.

The Strictly Come Dancing 2021 Final is available to stream on BBC iPlayer now and Good Morning Britain airs weekdays at 6am on ITV.