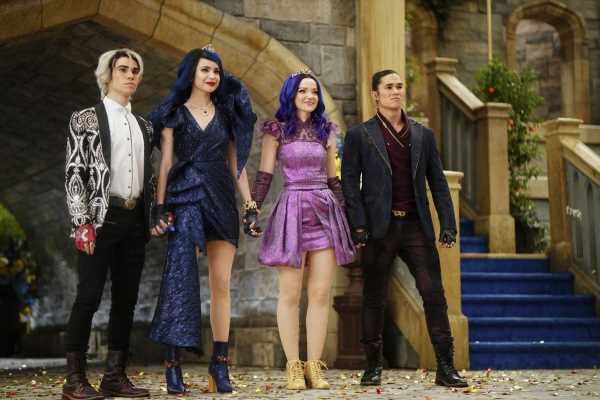 There are plenty of adventures featuring Carlos, Jay, Mal, and Evie. Some of which are available on Disney’s streaming platform, Disney+.

Is Disney Channel’s Descendants available on the streaming platform Netflix? Here’s what we know about this DCOM and its spinoffs.

It’s good to be bad. Take it from Mal, the daughter of Maleficent, who grew up alongside Disney villains, sidekicks, and their children. When she and her friends are offered a transfer to the magical land of Auradon, though, everything changes.

In 2021, Disney Channel released its animated special titled Descendants: The Royal Wedding, featuring the characters King Ben and Mal. Now, some fans are wondering where (and how) to stream these DCOMs.

Is ‘Descendants’ available on Netflix?

These characters are rotten to the core. Sometimes this Disney Channel movie broadcasts on the television network. If you don’t catch it on TV, though, there are a few other ways to binge-watch the Descendants movies.

Most content featuring Mal, Evie, and Carlos, including the animated special, Descendants: Wicked World and the final film in the trilogy, Descendants 3, is available on Disney’s streaming platform, Disney+.

Some Descendants franchise songs and their corresponding music videos trended on YouTube, including Descendants 3’s “Queen of Mean.” Since these movies premiered, though, most songs became available for streaming on platforms like Spotify and Apple Music, earning millions of plays from fans in the process.

This franchise has since broadcasted its final film. However, some cast members shared they would return and reprise their roles. That includes Dove Cameron, who acted as the main character, Mal.

“I would be open to doing more,” Cameron said during an interview with DigitalSpy in September 2019. “To be completely honest, as an actor who is not beholden to Disney, I would say that I think it would be smart for them to capitalize on the brand that they created.”

“I think it would be smart to do maybe a spinoff with maybe the younger characters,” she continued. “I know that Disney has been very specific about saying that this world doesn’t really ever end, it goes on forever, and the possibilities are endless.”

Descendants is available for streaming on Disney+. To learn more about Disney’s streaming platform, visit their website.