When the Philadelphia Flyers officially unveiled the team’s new mascot in September, the googly-eyed orange monster quickly became one of Twitter’s fiercest obsessions. Now, more than three months later, the creature known as “Gritty” has launched a thousand memes and the social media phenom shows no signs of stopping. (He just graced the cover of Artforum’s year-end issue.)

The internet’s collective interest seems driven by a series of unanswerable questions: Where did he come from? Was he born or made? Does Gritty actually ascribe to gendered pronouns? Was he born in the sewers under a hockey stadium? What is Gritty? Despite a cyclone of reporting on the mascot — some serious, some very serious — his genesis remains a thing of legend. However, the most recent installment of Hulu’s “Into the Dark” series may offer some much-needed answers.

“Pooka” is not a Gritty biopic; it was conceived, shot, and completed before Flyers’ fever swept America. But the story of one deranged mascot provides a better means to understand another, as well as the conflicting obsessions that surrounding it. Pooka shares a lot in common with Gritty, and the film’s foundation in holiday-horror mysticism explores the captivating dichotomy of certain populist creations, whether they’re an eerie talking teddy bear or a clumsy skater from the orange lagoon. 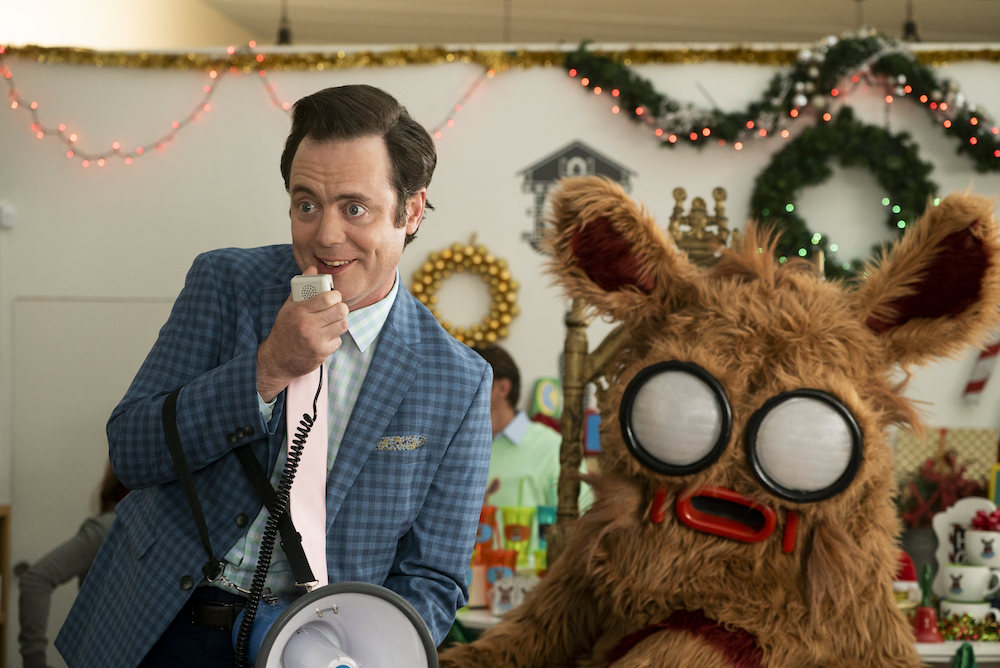 Jon Daly in “Pooka,” part of Hulu’s “Into the Dark” series

Directed by Nacho Vigalondo (“Colossal”), “Pooka” is the third “Into the Dark” installment. Produced by Blumhouse TV (and EP’d by founder and indie horror maestro Jason Blum), each feature-length “episode” (technically, “Into the Dark” is a TV series) has a new cast, a fresh story, and a holiday theme tied to the month of release. “The Body” tracked an assassin trying to dispose of a body on Halloween night, while “Flesh & Blood” revolved around a fateful Thanksgiving dinner (starring a kooky-and-loving-it Dermot Mulroney). “Pooka” centers on a Christmas tree, a man named Wilson, and a mascot with eerie similarities to a shaggy orange creature.

Wilson (Nyasha Hatendi of “Casual”) moves to Los Angeles to become an actor and, in typical L.A. fashion, lands a gig wearing a mascot costume to hawk a new “teddy bear” called Pooka. Its hook is Pooka’s voice: The toy repeats whatever is said, spouting the words back to the user as Pooka, or Naughty Pooka. Each vocalization carries its own distinctive tics, but it’s the unpredictability that makes Pooka irresistible. Families never know which Pooka will speak, and for reasons Vigalondo (along with screenwriter Gerald Olson) needs viewers to accept without question, being alternatively loved and scared is a serious attraction for kids.

Pooka becomes a hit, and Wilson — as the only man in a Pooka suit — is in high demand. That’s good news for his romantic pursuit of single mom Melanie (Latarsha Rose), as not only is Wilson now a well-paid working actor but he can supply her son, Ty (Jonny Berryman), with the hard-to-find Pooka teddy.

But here’s the thing: Pooka is not a teddy bear. Just like Gritty isn’t a… whatever people might think Gritty is, Pooka’s appeal can’t be explained by simple similarities to one of the most popular children’s toys of all time. If he’s a bear, why are his ears so big? What’s with the straight red lines on either side of his toothless red mouth? Where did the giant red circle on his stomach come from? Why does he have huge, glowing, obviously electric eyeballs? 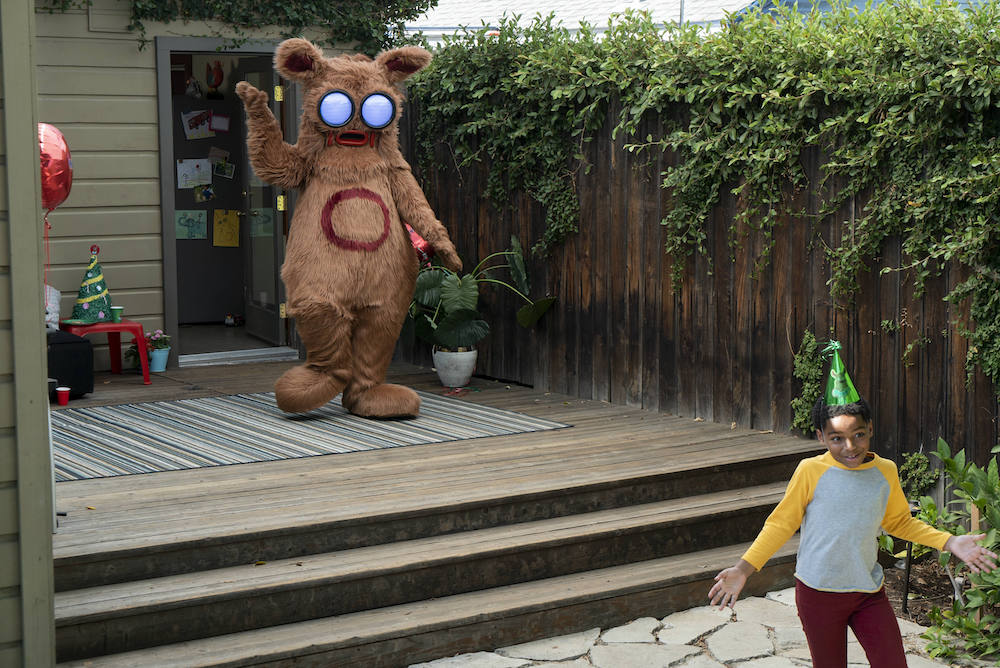 “Pooka,” part of Hulu’s “Into the Dark” series

On its own, “Pooka” is a solid horror alternative to Hallmark and Netflix’s cheesy Christmas movies. The ending, while foreshadowed a tad too heavily, is affecting (in classic B-movie fashion) and the build-up is stylish, provocative, and quick. (“Pooka” clocks in under 90 minutes.) Hatendi is a top-notch performer, able to shift Wilson’s genial dynamic on a dime without hinting too strongly at any of his repressed secrets, and the story careens forward with enough tangible lunacy to hold your attention and stimulate your imagination.

Taking “Pooka” to a fanciful extreme is key to appreciating its creative prowess. So many horror movies function as real-life allegories, meant to help audiences wrestle with the unknown and inexplicable. From the nuclear terror spawning Godzilla to the McCarthyism paranoia driving “Invasion of the Body Snatchers,” the real-world context of a movie’s diegetic frights is often just as disconcerting as what the characters go through. They don’t always have to be intentional parallels, either; what the audience brings to a movie can be as meaningful as what the filmmaker imagines.

So, intentional or not, “Pooka” is our means of reckoning with Gritty. There’s no hard and fast explanation for where Pooka comes from. He’s beloved by the masses, but the toy is quite clearly designed to be disturbing — he’s cute and creepy, just like Gritty. How a symbol of innocence can be corrupted by those with a more seasoned perspective is nothing new. Plenty of folks thought Barney was a weirdo, and then there’s Tickle Me Elmo. But Gritty seems to play into its duality more than other mascots. Just look at his “break the internet” tweet or his “Star Is Born” meme. Those aren’t meant for kids, so much as they’re playing into Gritty’s surprising appeal with adults.

Pooka does the same thing. Children see something they want to hug. Adults (who often become Pooka’s victims) see an imposing, inexplicable figure, and that frightens them. Kids are innocent enough to trust in the unknown; adults are jaded enough to cast a suspicious eye on anything too out of the ordinary. In other words, kids see Pooka; adults see Naughty Pooka.

Of course, plenty of leery children might the experiences that bias them against mascots just like some adults hold on to childlike wonder long after most folks let it go. But that’s the effectiveness of something like “Pooka”: Whether you’re a kid at heart or early to adulthood, the film either subverts your trust for scares or justifies your fears.

No one’s claiming Gritty is about to break bad and start purposely terrifying children, or having sex with their moms out of vengeance (Naughty Pooka gets real naughty, you guys). But “Pooka” examines the fine line between cute and creepy by creating a figure that bounces back and forth with ease. Gritty could do the same, and does. Some people are already there, so “Pooka” could be just the thing a confused nation needs to accept their feelings about Gritty. One person can think he’s cute, another can only see creepy — and both are right. As the film eventually argues, it’s not the mascot that’s one or the other. Only you can decide what you believe is inside.

“Pooka” is streaming now on Hulu. “Into the Dark” releases a new movie (or “episode”) every month.