Ant McPartlin and Declan Donnelly started Friday’s episode of I’m A Celebrity… Get Me Out of Here! with a smidgen too much excitement.

The presenting duo began the show as usual, ready to update viewers on some of the goings on at Castle Gwrych since yesterday (mainly David Ginola’s impressive snoring).

However, Dec was so eager with his gallop onto the set at the top of the show’s first live segment that he popped a few of his shirt’s buttons open in a live gaffe.

His wardrobe malfunction prompted Ant to burst into laughter and quip: ‘We’re not live, are we?’

The pair then left the room before re-entering for a second attempt, with McPartlin going on to joke about the location’s ‘changeable weather’ in reference to the damage cause to the set by Storm Arwen.

The saucy duo clearly weren’t planning on showing any skin as part of their segment though, as the show got going again – but they haven’t shied away from cheeky comments.

On Wednesday they threw shade at Boris Johnson with their customary ‘Evening Prime Minister’ catchphrase. 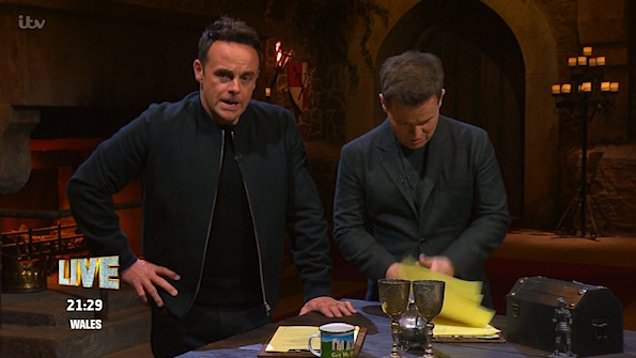 Introducing the show, the pair teased that a new camp leader would be elected.

Describing the role, the Geordie duo explained that ‘they look dishevelled, give easy jobs to their mates and make it up as they go along,’ before giving us an ‘Evening Prime Minister’.

The pair didn’t stop there, with them going on to speak about the Castle ‘lords’.

‘How do you get to become a Lord?’ Dec asked, with Ant replying: ‘Donate £3m to the Conservative Party?’

Dec followed with another ‘Evening Prime Minister!’ then pointed to Ant and added: ‘He’s coming for you, tonight!’

As the duo prepared for the challenge, Matty admitted he was ‘buzzing’ to finally get the chance to have a go at one.

He added: ‘He’s [Naughty Boy] done so many and I’ve done, so he knows how it all goes.’

With Naughty Boy placing his arm blind inside the gargoyles to push down hidden levers, Matty went into tunnels to untie the lowered stars attached to ropes.

Obviously there were critters aplenty, with a snake, cockroaches and naked mole rats to name just a few, but the campmates prevailed and won ten out of the available eleven stars.