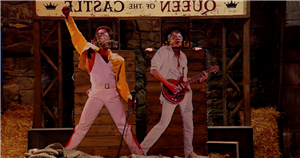 In a new preview for Thursday’s episode of I’m A Celebrity… Get Me Out of Here!, Simon Gregson and Adam Woodyatt are covered in snakes for a terrifying trial.

Simon, 47, and Adam, 53 – who are iconic actors from Coronation Street and EastEnders respectively – are the latest additions to join the hit ITV show at Gwrych Castle in North Wales.

In a new preview for Thursday night’s episode, Simon and Adam can be seen to take on the Castle Scare Fair trial, where their heads are locked in a box full of snakes.

The new arrivals have to unscrew two stars in front of their face using their tongues, as the snakes slither around their heads.

Their campmates cheer in support as they watch the trial from the benches opposite. The celebrities can be seen grimacing as the handful of snakes drop over their face around move around their necks.

Neither of the contestants seemed fazed by the gruesome trial or the snakes slithering past their eyes.

As Danny shouts to “use your tongue”, Adam starts by using his chin to spin the star.

Simon can be seen to quickly find his rhythm as he spins the star with his tongue and it whizzes round.

Before his co-host, Ant bursts into laughter and echoes: “That’s it. Good tongue action there.”

Dec responds: “Yeah it is” as they both chuckle.

The campmates continue to shout out advice for Adam and Simon who are neck and neck in the race to get the star of the nail.

Danny shouts: “Use your head as well Simon” but Simon continues to use his tongue so he adds: “or not.”

It was announced at the end of Wednesday night’s episode that Simon and Adam would be joining main camp.

Adam is best known for his role as Ian Beale on the beloved BBC one soap, while Simon plays the iconic Steve McDonald on the award-winning ITV soap.

As they entered the show, Adam admitted his biggest phobia was “bugs and rodents”. He said: "I’ve known about doing I’m A Celebrity for a long time and I can’t wait to go in now! I don’t mind if I am first or last in the Castle – I am just really looking forward to being on the show."

Simon admitted that his main phobia is of “big spiders.”

He added: "It was common knowledge I would never do I’m A Celebrity. But my wife and kids were like, ‘Come on Si, you’ve got to do it, you will have fun.’ And so, I’ve said yes! It is something cool for the kids to watch dad scream like a young child!”

Stay up to date with all the latest on I'm A Celebrity… Get Me Out Of Here! by signing up to OK!'s daily celebrity newsletter .