Hailee Steinfeld supremacy continues with Hawkeye! The final season of her period comedy Dickinson isn’t even over yet and she’s smashing her debut as a Marvel superhero alongside Jeremy Renner, a perfect pizza-loving pup named Lucky and, rumor has it, Florence Pugh.

The first two episodes of Hawkeye just dropped today (November 24) on Disney+, giving us a nice lil mini-binge to kick off the holiday season. Because, oh yeah! I don’t know if you heard, but Hawkeye is a Christmas show. (The show set in New York City during the week leading up to Christmas. There are decorations, jingles all the way, and Santas around every corner, so…suck it, Die Hard.)

You might be wondering when Hawkeye is returning after a cool two episode drop though. Turns out, we’re just getting one episode a week going forward. If you remember all the way back to January 2021, WandaVision did the same thing. Here’s everything else you need to know about Hawkeye‘s release dates and times. 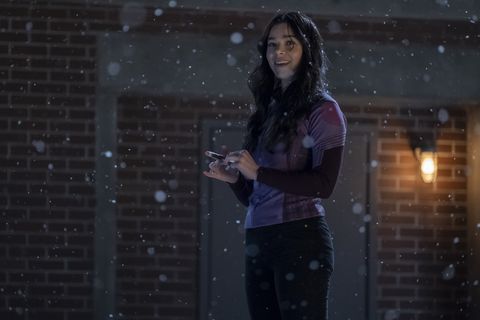 How many Hawkeye episodes are there total?

Six! I’ll let you in on a little secret, too. The episodes seem to be counting down to Christmas Day. I can’t say this with 100 percent certainty, but in Episode 1 there are six days to Christmas, in Episode 2 there are five days to Christmas… you get the idea. If the show keeps this up, you should be able to keep track of how much is left by how close they are to the big day.

Episode 6 drops on December 22, just a few days before Christmas IRL. We only get to live in the girly, glamorous, and daring world of Kate Bishop, the world’s greatest archer, for a little over a month.

If you’re obsessed with Kate and Clint’s adventures and six episodes isn’t doing it for you, check out Matt Fraction and David Aja’s Hawkeye comics. They’re very easy to hop into even if you’re not a big comic book reader.

Why did Hawkeye drop two episodes only to switch up the release schedule afterwards?

It might have something to do with The Book Of Boba Fett premiering on December 29. It would make total sense if the folks at Disney+ didn’t want there to be any Marvel/Star Wars series overlap, lest the nerds (myself included, obvs) short-circuit from content overload. It’s kind of a boring theory, but there you have it.