Hulu’s Christmas rom-com, Happiest Season, is not exactly revolutionary in its representation of queer people — it centers on well-to-do, white lesbians — nor does it set out to reinvent the holiday-centric romantic comedy. (There are hiccups and hijinks, but the couple is kissing again come Christmas.) It is radical, however, in centering those queer people in a still overwhelmingly straight-laced genre.

Which is exactly what director and writer Clea DuVall (who penned the script with actress Mary Holland) set out to do. “Growing up as a gay kid, I never saw myself represented in any movies, much less a holiday film,” DuVall tells ET. “As I transitioned into writing to directing, I thought to myself, ‘Why don’t I just make one of those movies then?'”

Thus, there are the trappings we know and love and have come to expect in any holiday movie: The not-so-perfect family set on having the perfect holiday. The town full of quirky and lovable characters. A big, romantic gesture around the Christmas tree. Instead of the big-city gal falling for the small-town guy and realizing the true reason for the season, DuVall added her spin on a coming-out story to make the Yuletides gay.

Happiest Season follows Abby (Kristen Stewart) as she makes the trip to the childhood home of girlfriend Harper (Mackenzie Davis) with the intention of proposing at Harper’s family’s holiday party. It’s not until she gets there that Abby discovers Harper’s family doesn’t know she’s a lesbian. 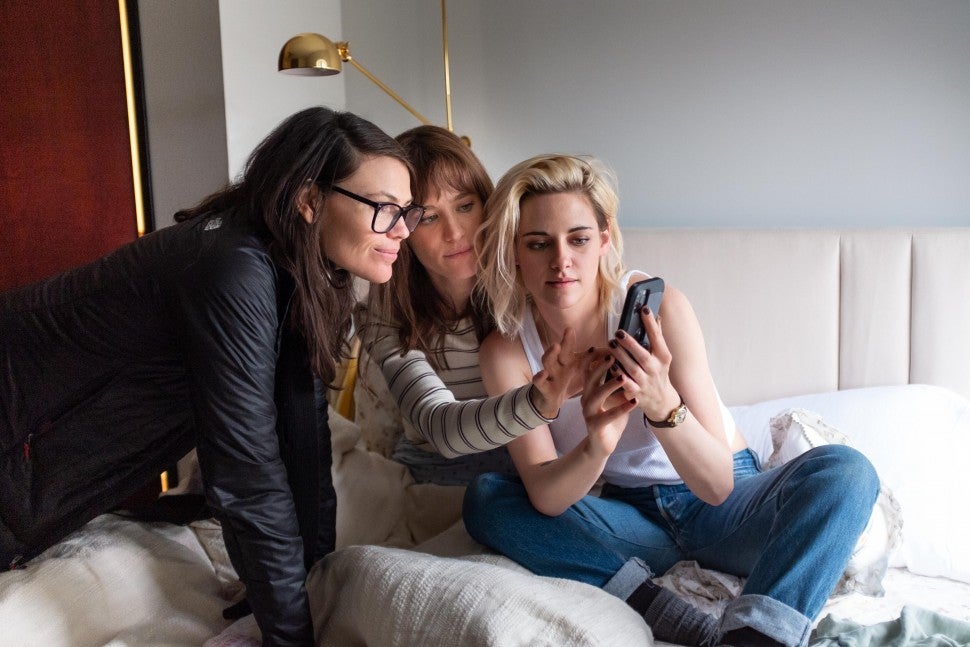 The film arrives as holiday rom-com factories like Hallmark, Lifetime and increasingly Netflix are realizing that diversifying the stories being told means more than adding in a side plot involving a queer character but allowing those characters to be who the movie is about. (Cue The Christmas Setup and Dashing in December, among other recent releases.)

Stewart echoes DuVall’s sentiment in that “it’s the movie that never really existed that I would’ve loved to have had years ago.”

“The fact that somebody asked me to help make it right now,” she says, “I was like, ‘Oh man, I’d be so jealous if Clea hadn’t called me and she called someone else.’ I would be just as happy to have it and watch it, but the fact that I got to participate was, you know, all the better.”

The supporting cast is likewise fleshed out with members from the community, including Victor Garber (as Harper’s conservative father), Aubrey Plaza (as a woman from Harper’s past) and Dan Levy, as Abby’s best friend and confidant. “The one scene that I think really functions as, like, the movie’s mission statement [is] Dan Levy’s speech about coming out,” Stewart says. “How everyone’s story is very much their own and individualized and how there has to be room for every version.”

Happiest Season is also only one version — DuVall’s version, shaped by her personal experience — but that it now exists in the canon means there’s room for more. Abby and Harper’s happiest ending should only mark the beginning of the queering of the holidays, a gift of representation that will hopefully keep on giving.

Kristen Stewart on the Pressure of Coming Out & Representing Queerness