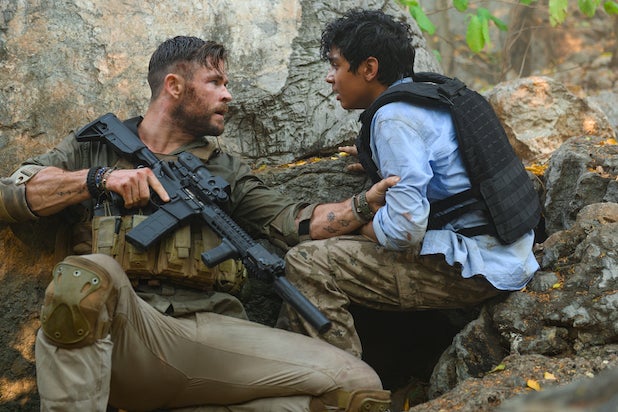 If you just finished watching Chris Hemsworth in “Extraction” on Netflix and wondering how the hell they pulled off that 11-minute single take, TheWrap has got you covered.

The scene in question happens during the middle of the movie and takes place when Rake (Chris Hemsworth) is pursued by Ovi (Rudhraksh Jaiswal) on a captivating chase that first starts inside a car, then a foot chase ensues which spills out onto the streets, then Rake and Ovi go mano-a-mano inside a tenement building before returning back into the streets of Dhaka. Those are just the broad strokes as the shot is way more detailed than that. How is how they put it together.

“Yeah, we termed that sequence the ‘one-er’ because it was put together of a sequence or a series of long takes that made it look like one 11-and-a-half-minute continuous take,” director Sam Hargrave told TheWrap.

“We were restricted by certain technical and location limitations where some of the…your ego wants to do one continuous take, I would love to do all fight scene, 11 minutes without cutting the camera but we had to move locations. Sometimes when you’d go in one door from one spot into another that was 10 miles away, so you couldn’t actually do that. And then you’d have to build up the buildup of damage that they would get as they went through these action sequences, you had to be true to that until you stop and apply more blood or a larger tear in the wardrobe or whatever it might be.”

The ‘oner-er’ scene in Dhaka was improvised by Hargrave and his team as it originally wasn’t written that way. “So necessity broke it up, but in the movie, it comes off as one 11-and-a-half-minute sequence and the… It never actually started that way, as written, it was this big action set piece that reading it your eye eyes were wide” added Hargrave.

Traditionally, to pull off a shot like that would take two production teams. The first unit with Hemsworth for a week and a second unit team for three weeks. However, as Hargrave tells TheWrap they didn’t have time to shoot it the traditional way, and instead had to run and gun with a willing Hemsworth who was game.

“So I was like, ‘Well, if we didn’t have to break it up into two units…’ Because it’d be… In my experience, main would take it for seven days, second unit would have it for three weeks. I was like, ‘We don’t have that kind of time, so how do we do this?’ And Chris is very skilled physically, so I was like, ‘Wow, what if he did most of this stuff?’ And we built it around his skills and we followed him and it kind of came out of that, this necessity and a desire to… Because this part of the world hadn’t really been seen much before in Western cinema, hasn’t been, I was like… It’d be really great for audiences to be on board a real time extraction in this location, that you kind of feel what that’s like and see the world, feel the environment, hear the sounds,” Hargrave said.

Ultimately, it took Hargarve and the filmmakers almost two weeks to pull off the ‘one-er” with weeks of rehearsal before shooting. It clearly paid off.

“So once I pitched it that way to the my fellow filmmakers, everybody was on board and it took… I mean we shot it over the course of 10 days, but rehearsed it for many, many weeks. It was months in the making of what you guys see in the final product.”

“Extraction” is currently playing on Netflix.