Hollyoaks star Angus Castle-Doughty has warned that Hollyoaks fans would be remiss in assuming that ‘wounded animal’ Eric Foster isn’t capable of going all the way in his horrific siege with a crossbow.

The sinister incel has contrived a sickening plot, in which he plans to take hostage and kill local women and, in an hour long special, the storyline reaches a major crescendo.

Speaking exclusively to Metro.co.uk, Angus explained that Eric feels indestructible as he launches a plan into action; and he is capable of anything.

‘He’s incredibly dangerous because I think he believes that he’s got nothing left to live for,’ the actor told us. ‘And with that comes this air of indestructability because he doesn’t value himself so why would he value anyone else?

‘I think anyone looking at Eric in a way that he’s not capable of hurting people should question themselves a little bit, because I think that’s where a lot of the damage can come. 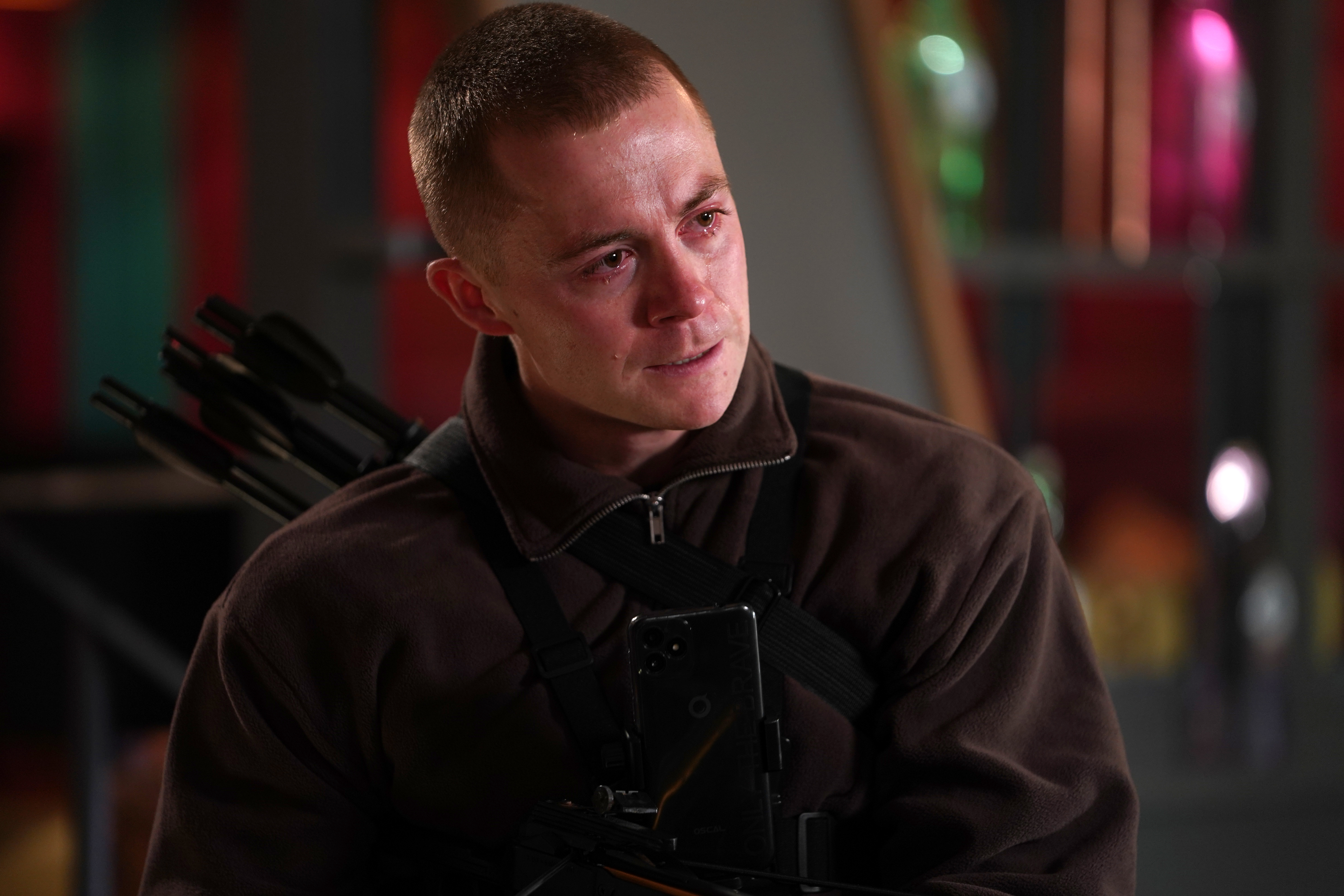 It’s not a spur of the moment thing either. Groomed and radicalised to hate women and believe he is owed, and being denied, sex from them, Eric wants to take what he thinks is revenge.

It starts with his holding Maxine Minniver (Nikki Sanderson) hostage, while he arms himself with a crossbow and a mobile phone to film his sickening acts.

‘It’s very meticulously planned, and I think it’s been planned for a month, if not longer,’ Angus revealed.

‘I think its more whether he has the capabilities of actually doing it. Because I stand by this, I think people are people: I don’t think Eric is a bad person.

‘I think he’s lost, and at this point has been completely lost and detached from society and I don’t think really when it comes to face-to-face interactions, when push comes to shove… I mean, it surprised me.’

The actor went on to muse: ‘I don’t think he’s profoundly capable of actually doing the things that he believes he can. So, he’s got all the planning in the world but, as people will see, the moment he’s forced to confront these things, or his guard drops, or his emotions get the better of him, it’s an exercise in trying to shut all those down immediately.’

It’s a role that has taken Angus through over a year of a powerful Hollyoaks storyline, and it’s not one he has taken on lightly.

With Eric at the extreme end of the spectrum, Angus reasons that the human situations that got him there are, at their core, relatable.

It has been playing off these that has helped the actor explore and demonstrate the psyche of an increasingly troubled and damaged man, who feels the world is against him.

‘I think as people, we’re all just emotions that sort of walk around in big skin bags. So the judgements, the actions, are one thing and we project judgements onto the actions,’ he said.

‘But actually, I think the emotions that Eric feels are things that are all quite relatable to varying degrees. We’ve all felt lonely and not listened to and so I sort of started there really.’

As the saga progressed, Angus was keen not to play things too suddenly or too early, knowing the importance of Eric’s development and descent.

‘I think one of the most important points is obviously after Verity dies, there’s a definite switch and I decided that it’s during the memorial speech he’s going to do something drastic and starts removing himself from society.

‘We’ve shown quite a clean nervous boy at the beginning to this erratic, wild animal really. That’s what it felt like doing the siege. It felt like being a damaged animal in the corner of the room.

‘I don’t think the audience should ever know what he’s capable of and whether he’s walking around with this crossbow because he can actually do something with it or whether it’s just trying to seem more imposing.

‘I think that might be something that makes it quite unsettling because the crossbow felt heavy in my hand and I was as scared of them as they were of me. And it sorted of manifested in weird ways.

‘Like on set, there’s two big speeches where Eric really breaks down, I guess, and I would prepare for them away from everyone else. It just didn’t feel right when we were resting off between set ups or between scenes, it didn’t feel right to sit with everyone because I would sit with my friends and be laughing and joking.

‘So, I sort of just took myself off into corners of the studio really, which I can’t imagine was very fun for everyone!’

That said, Angus added that he relished the challenge, and even the productive exhaustion it brought at the end of the day.

It’s clear Hollyoaks is throwing it all at the conclusion to a topic more current than ever; and it all reaches a peak in this hour long.

The question is that, with a trailer already telling us that Diane is dead, how far is Eric set to go?

Is this the end of him, and others?

Hollyoaks airs the one hour special on Tuesday January 10 at 7pm on E4.