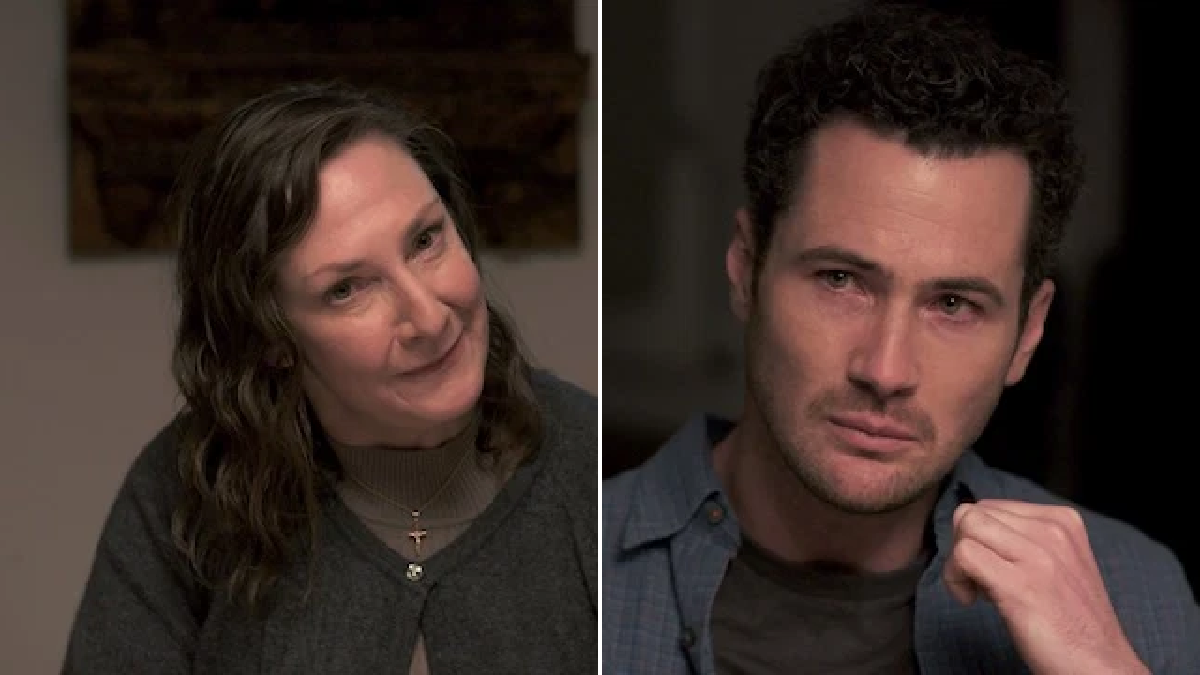 Former Hollyoaks and Holby City star Paul Sloss has explored his own story of coming out to his mother in a brand new short film, starring alongside Father Ted and EastEnders icon Pauline McLynn

The moving and warm ten minute short, which has been shortlisted for several film festivals and directed by Ben Hull, is called Out! and is available for viewers to enjoy.

Here, writer and actor Paul and director Ben tell Metro.co.uk all about the film, its conception and about Paul’s views on why Pride remains more important than ever.

How did the concept of Out! come out, is it based on real life experiences?

Ben: Paul had written a number of excellent short scripts but this one really shone for me. I loved the honesty of the writing, and all the comic touches too.

Paul: I actually wrote the first draft of Out! after reading someone else’s script that had a coming out scene that didn’t really feel authentic to me.

So my reasons were twofold, on one hand I wanted to show that you can still use humour without undermining what a huge thing it is to speak about something that has caused you so much shame growing up, and on the other it actually became quite a cathartic experience as I looked back on the my own coming out story and what I had learnt in the 9 years since.

It’s been officially selected for a number of film festivals – how does that make you feel?

Ben: Very proud. It was such a lovely piece to work on and I’m happy that people are enjoying it.

Paul: It has been incredible to share our story with a wider audience and get such positive feedback. Film festivals are a wonderful way to showcase independent film making. It’s just a shame that due to the pandemic it never got a cinema screening as all the festivals went online. But the intention was always to make it available to as wide an audience as possible to help people understand how difficult it can be to speak the truth in the moment, but then how much relief there is at the same time.

What was it like working together on this project – are you proud of the result?

Ben: It was great! Paul and I have known each other for a number of years, but this was the first project that we’ve worked on together. I’m very happy to say that even after the event that we are still friends!

Paul: I loved working with Ben on this project. He has very different life experiences to me and was also much more experienced in film making so was able to guide me in what would work and what wouldn’t. I’m so proud of what we achieved on a shoestring budget, we shot the whole film in one day.

The whole team was incredible and really believed in the project. Ben is a great friend but also so talented in both directing and editing, his enthusiasm is contagious and I hands down couldn’t have made the film without him.

What overall message would you like viewers to take from it?

Paul: I’d really like people to see how some of the comments that are made off hand about LGBT people, that aren’t intended to offend, that are just “harmless fun”, can really have a negative impact on someone’s self-worth after a lifetime of hearing them. I also wanted to offer more of an understanding from a parents perspective when perhaps they don’t react in the perfect way in the moment, or have said things when you were growing up without thinking. They are human too, and are always learning and growing.

Finally the biggest message I want to spread, as cliché as it sounds, is that the truth will set you free. It may not always work out the way you’d want, it might hurt people or break down relationships, but continuing to lie or pretending to be someone else will always make you feel worse.

Is it important for it to be light hearted and funny as well as moving, rather than a gritty experience?

Ben: Absolutely. The balance is key and for me is why the film works so well.

Paul: I 100% agree with Ben. I think you have to find the humour in everything. Life is hard. We need to be easier on ourselves and if you don’t take yourself too seriously it can help when people are being cruel.

Did you enjoy having the wonderful Pauline McLynn involved?

Ben:  What a treat! Pauline is such a brilliant actress and a whirlwind of fun and creativity to be around. I’m a massive ‘Father Ted’ fan too!

Paul: Pauline was incredible, from the moment she read the script to when we wrapped on the filming day. She was so kind and accommodating, and it was a pleasure, a surprise and a delight as I’d written it with her voice in my head and never imagined she would actually agree to do it!

She also offered generously her fee to charity which went to AKT in support of homeless LGBT youths who aren’t necessarily as lucky as the character in in the story, young people who find themselves disowned and cast out by their family because of their sexuality or gender identity.

How did your experiences in TV and acting help you make this such a success?

Ben: I’ve been an actor for 30 years and so when I’m Directing, I hope it makes me better communicate to the cast what I’m after in the scene.
Three decades in the business also means that I know when it’s time to give the cast a break and the vital importance of a good selection of biscuits no more than a yard off set.

Paul: For me I would say it ended up being the other way round. I wasn’t cast in Hollyoaks or Holby until after the film had been made. I sent the short film to a number of people in the industry that I had auditioned for in the past and Bryan Kirkwood at Hollyoaks was kind enough to watch it and offer feedback, which started my journey towards playing Dean.

Of course, the Hollyoaks fans were very supportive on social media too, watching and sharing the film when it was in online festivals.

Times are changing but would you agree there is still a long way to go in terms of acceptance and equality?

Paul: I definitely think times are changing, and they are changing fast. Within my lifetime British newspapers shamed a number of people for their sexuality and even rejoiced in the thought that we might be able to identify gay gene so parents could choose to abort a gay child, homosexuality wasn’t allowed to be talked about in schools, same sex marriage and adoption was against the law, a virus was deemed a “gay curse”, gay men couldn’t donate blood. Now in 2021 I’m a happily married out and proud blood donor, something I couldn’t have imagined, growing up.

However, I realise that I am extremely fortunate. Not only do LGBTQ+ people around the world still get beaten up, jailed and even killed for living authentically, but even in sections of our own society these old tropes, negative feelings, and aggressions are still only too visible. I think celebrating difference, whatever that difference is, can only strengthen the fabric of our society moving forward.
Why is Pride Month so important?

Paul: Pride month is so important because it offers visibility to people who have had to hide who they are to “fit in”. It allows them to express who they have become and what they have to offer the world. It celebrates different life experiences and educates others so that they can broaden their view of the world.

More importantly it also gives the opportunity support those who may be struggling with their identity, or are feeling alone, to show them they belong to a community of people who know what they are going through, and will be there for them if they need it.

For Paul – If not too personal, can you give a few details about your own ‘Out’ journey?

Paul: I came out at the age of 25. I was terrified that my family would disown me, I felt awful that I’d been lying to myself and to the people I loved most. In my defence (and I’m only kind enough to myself now to offer that defence) I didn’t have the words or knowledge to understand why or how I was different, I just always knew, and knew I had to hide parts of myself or change certain behaviours in order to be more “acceptable”… the trouble with that is that the later you come out, the less time you have to figure out who you really are, without “the act”.

I’m happy to say that despite my fears my family have only ever been very supportive and accepting. My mum was horrified when I said I was putting my coming out story on film, but she loves the finished product and is glad that I offered more of her perspective through Pauline’s character, really the film is more about the mother than the son!

Who are your biggest inspirations in the industry or outside of it?

Ben: Crikey. So many people. This business was bloody hard even before the pandemic, so anyone that can carve a career out of it and keep going is pretty inspirational to me.

Paul: I have to agree with Ben there! In addition to that, I think ultimately my family and my husband are my biggest inspirations. Within the industry there are so many, but perhaps if I was to name one, Russell T Davies. Russell put Queer stories in the mainstream at a time when it certainly wasn’t fashionable and that was a lifesaver to a young closeted gay man in the 90’s.

Queer as Folk was my only real education (hopefully he would agree that it’s better for young gay men now that there are currently other forms of education available on the curriculum!) he has also continued this trend more recently with the knockout ‘It’s a Sin’. In my eyes educating a whole generation on what was really going on behind the headlines we all saw at the time.

If you were to make another short film, what would the premise be?

Ben: I loved Pauline’s character so much, I think that she should go on a series of adventures imparting wisdom and anecdotes wherever she goes! The Caribbean would be nice. I’ve even got a title: ‘Out! (and about)’. What do you reckon Paul?!

Paul: I love that idea! Especially after lockdown. She could become another gay icon! Film wise for me, I don’t know, I had thoughts about expanding this family and seeing what other secrets were still to be unearthed… Rita is a character I’d really love to explore. Who knows? Whatever it is, I’d hope it’s still something genuine, that comes from my own experience (real life is always more interesting) something that will both entertain and educate.