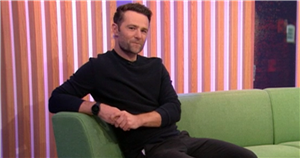 Harry Judd took a savage swipe at his McFly bandmate Tom Fletcher for missing out on his Strictly Come Dancing live show, teasing that it's all a ploy to get out of dancing in front of the cameras.

The McFly star, who won Strictly in 2011, spilled the gossip on his pal Tom when he returned to host BBC's The One Show alongside Alex Scott on Thursday night (30 September).

However, he couldn't resist dishing out some cheeky banter to his mate as soon as he kicked off the BBC One show.

It comes as Tom and his professional partner Amy Dowden were forced to drop out of the second week of Strictly after testing positive for Covid. As well as missing out on performing his second dance routine with Amy, Tom also had to pull out of his McFly tour which he had been trying to juggle with his Strictly duties.

The singer has been self-isolating as he gets ready to return to the dancefloor for the third week of the competition.

Harry's co-star Alex wanted to chat to Harry about how Tom was doing, asking him: "We have to ask about your bandmate Tom, how is he? We've seen in the news from Strictly that he's going to miss this week." Putting on a jokingly-stern tone, Harry continued: "I know, I think he might have over-done it but no he's fine.

"I spoke to him last night and he's okay."

Harry then savagely said: "I have this theory that he's just trying to avoid the Viennese Waltz, Alex, but we'll see."

Alex burst out laughing on the green sofa as Harry added: "But he'll be back next week!"

Tom confessed that trying to balance his McFly tour with his Strictly obligations was a "silly idea", and that he didn't do it "very successfully". The singer admitted he was "gutted" to be missing out on his next Strictly dance with Amy as well as having to skip the remaining dates on his McFly tour.

Announcing their temporary exit from the show at the time, a BBC spokesperson said: "Tom Fletcher and Amy Dowden have tested positive for Covid-19.

"While they will both miss Saturday’s live show, Strictly Come Dancing protocols mean that all being well, they will return the following week."

The One Show airs weekdays at 7pm on BBC One and BBCiPlayer.