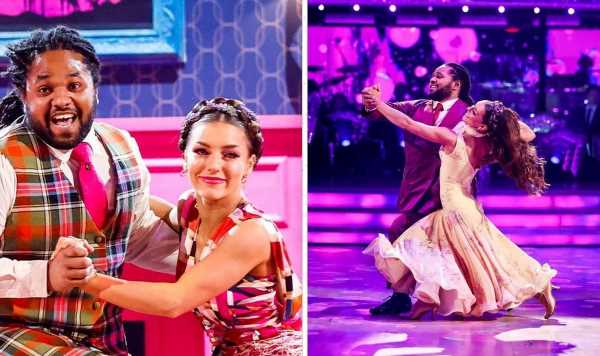 Hamza Yassin is the hot favourite with bookmakers to head home as the champion of Strictly Come Dancing this year. With Saturday’s final a matter of days away, Hamza and his professional partner Jowita Przystał look set for victory after leading the odds market for weeks. The wildlife cameraman’s main competition appears to be fellow Countryfile star Helen Skelton.

A two-horse race appears to have been created in the run up to the huge BBC final this weekend.

TV presenter Helen and her professional dance partner Gorka Marquez are the stiffest competition to Hamza and Jowita, according to Ladbrokes.

Alex Apati from the betting company said: “Hamza has headed the betting for so long, we’d be amazed if he doesn’t take home this year’s Glitterball Trophy.”

Hamza is currently priced at 1/2 to lift the coveted prize, with Helen at 7/4 to take the top spot.

Two more celebrities make up the final four and they are the outside bets with Ladbrokes.

Molly Rainford is tipped at 40/1 to come through four dance-offs as the series winner.

Fleur East is a little further behind at 66/1 to come back from last week’s bottom two to reign supreme.

All of the talented quartet will perform three dances in the grand finale and the details of each routine have been released.

The performances will be divided into a Judge’s Pick, Favourite Dance and Couple’s Choice and Showdance.

Hamza will dance to Let’s Face The Music And Dance by Irving Berlin, as well as Ecuador by Sash!

They will recreate their iconic Couple’s Choice of Jerusalema by Master KG featuring Burna Boy.

Last week, the couple to miss out on a spot on the final was the devastated Will Mellor and Nancy Xu.

After criticism by the judges they scored a disappointing 32 out of a possible 40 and finished the evening bottom of the leaderboard going into the public vote.

At the last hurdle they agonisingly lost a dance-off to Fleur and Vito Coppolla after missing out with their ’90s inspired dance to a medley of Manchester dance hits.

In a nail-biting climax to week 12 of the show, Craig Revel Horwood and Motsi Mabuse opted to keep Fleur in the competition.

However, Anton Du Beke set up a tense finale when Shirley Ballas held the final decision on who would progress and she elected for the couple nicknamed ‘Fleurito’.

Will appeared on It Takes Two on Monday and was visibly upset by the agonising failure to miss out on the final.

Alongside Nancy, he told Rylan: “From what the judges said I beat myself up and I’ve watched it back and I was too hard on myself.

“I’ve always said what I really care about is making sure [Nancy] is happy and if she’s happy then I’m happy.”

The Coronation Street actor declared: “It wasn’t as bad as they sort of made out.”

Strictly Come Dancing airs on Saturday at 7.15pm on BBC One