Zoey didn’t walk at her college commencement ceremony on Thursday’s Season 4 finale of grown-ish — but not for the reason you might think. (FYI: We’ve got the scoop on which grown-ish cast members will not be returning next season.)

Contrary to what show promos would’ve had you believe, the eldest Johnson child didn’t run off to be with Aaron in South Africa or Luca in New York. Instead, she was locked on the rooftop of the gang’s old dorms where they all had thrown an uplifting and thoughtful mock-graduation for Vivek. Luca was right up there on the rooftop with Zoey because the two had stayed behind to argue about Luca’s fashion line, Anti Muse, after the party ended and everyone left.

Luca found a genuinely interested investor. But the minute the woman started talking about streamlining the designs to make them palatable for the masses at stores such as Macy’s and Saks Fifth Avenue, Luca checked out mentally and wanted no part of the business.

When he shared this news with Zoey, she went ballistic because she had chosen not to go to South Africa with Aaron to pursue her passion for fashion with her creative soulmate, Luca. An angry Zoey then accused Luca of being self-sabotaging and jealous of Aaron, and Luca clapped back by calling his ex-girlfriend and Aaron, her preferred boo, “basic.”

As an added insult, Luca said Zoey was a sellout for wanting to go mainstream, and Zoey rebutted that Luca’s idea of success was distorted (except she used a curse word). Stuck on the rooftop without cell reception, Zoey and Luca eventually fell asleep and woke up the next morning in more apologetic and amiable moods. 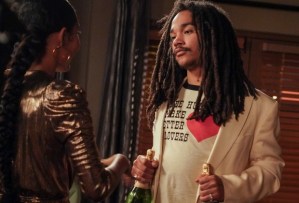 Zoey poured them both a glass of leftover party champagne and lamented that her family wouldn’t get to see her graduate and she didn’t know what to do professionally. Luca tried to encourage Zoey and eventually added that she was anything but his “Anti Muse.” If anything, he argued, Zoey was his muse for all of his designs, and if she was interested in moving forward with the investor, the company was hers.

Luca also observed that the best pieces in their line — especially that fuego patent leather trench coat — were her creations. A gobsmacked Zoey thanked Luca for his kind words but didn’t know if she was confident enough to move to New York on her own. Before she could decide, Nomi, Jazz and Ana figured out where Zoey and Luca were and rescued them from the rooftop. 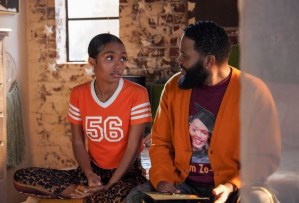 Later, when Zoey talked to her dad Dre about what had happened and why she was stuck up on the roof in the first place, Dre was heartbroken for his daughter that her career dreams weren’t going as planned. That’s when Zoey came clean and revealed the investor was still interested, she just wasn’t sure if she could pull off Anti Muse on her own.

Dre then wondered what Cal U — and all the money he’d spent sending her there — was good for if Zoey didn’t have the self-assuredness she had when she first enrolled. He challenged Zoey not to bail on herself and even wished he could tag along to New York with her. An inspired and empowered Zoey thanked Dre for believing in her, and three months later, Zoey was shown working her sartorial magic in the Big Apple.

While she seemed to have it all, Zoey missed Aaron and even mistook a random Black man with a similar haircut for the learned love of her life. Happy that everything else was going great in her life, Zoey strutted off to her apartment. Not long after her front door closed, a cab pulled up, and Aaron stepped out of it and winked at the camera because he was going to get his girl. Awwww! Yay, #TeamZaaron!

Elsewhere in the installment, Phil stopped fighting Nomi for custody of Luna and decided to join them in Connecticut so Nomi could attend Yale Law School. Ana turned down clerking for a conservative judge, and Vivek, who is starting at a new college in the fall to complete his degree program and graduate, volunteered to drive Ana to her hometown of Miami, and Ana agreed.

Jazz and Doug remained “just friends,” and Zoey walked across an empty stage in her cap and gown so Dre could relish the moment over and over on his phone and make himself (and us) cry tears of joy.

What did you think of the Season 4 finale of grown-ish, and do you think Zoey picked the right man? Grade the closer in our poll and drop your thoughts in the comments.