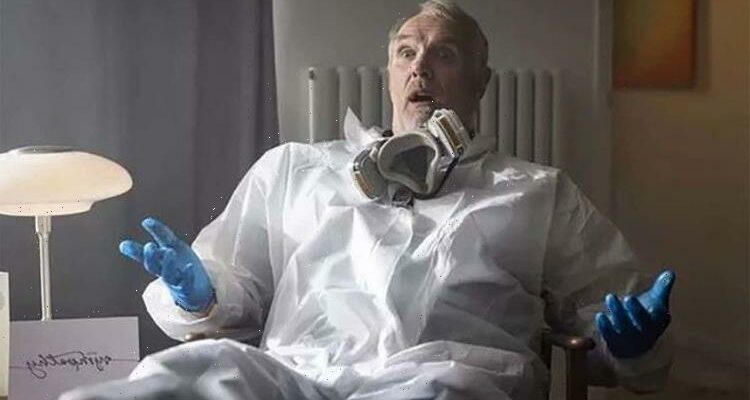 The Cleaner: Official trailer from BBC One

The Crown and Harry Potter legend is one of the most in-demand film stars in the business which is why Davies, 53, had hardly dared hope she might agree to join the cast. “We sent the script to her but I didn’t for a second think she would do it,” he reveals. “All I can tell you is that when she said ‘Yes’ I squealed with joy ‑ I couldn’t believe it.”

The show has been adapted for the BBC by Davies from the multi-award winning German comedy series Der Tatortreiniger (Crime Scene Cleaner), and he also plays the lead.

His character, Paul “Wicky” Wickstead, is the man sent in after the police have finished collecting evidence to remove whatever mess has been left behind.

Armed with chemicals, scrubbing brushes and a very strong stomach, Wicky sanitises the scenes of some rather gruesome crimes.

In the process, he meets the strangest of people, from victims’ relatives, employers, neighbours and even a few murderers.

In tonight’s first episode, Wicky turns up at a large detached family home in the suburbs to scrub down a blood-splattered kitchen where a husband has been brutally stabbed to death by his wife, who could no longer cope with his modelmaking obsession.

It’s a pretty standard Wednesday for Wicky, who is working at a pace to make it to his favourite curry night at the local.

If only he would stop being interrupted by people dropping in on the crime scene, including a mysterious, heavily-armed woman. Enter Bonham Carter, as Sheila, who confesses she is newly widowed ‑ having killed her husband.

Holding Wicky at gunpoint, she takes him prisoner. An uncomfortable bathroom scene is among the highlights, says Davies.

“I’m sure Helena wouldn’t mind me saying that it’s that toilet scene, complete with the surreal nonsense that goes on after it, which is what drew her to the project,” guffaws the comedy actor. “That’s what she was excited by.

“She’s got a healthily black sense of humour and that made her give it [the script] a second read. So yeah, it was great fun. She was great fun.”

Despite leaping for joy when she took the role, Davies admits he was only briefly star-struck, because despite her stature in the business, she does not take herself too seriously. “It was daunting for exactly 10 minutes,” he said.

“If you ever meet her, you’ll understand why. I had a great laugh with her.”

Also lined up for the show are David Mitchell (Upstart Crow), Stephanie Cole (Still Open All Hours), Donald Sumpter (Game Of Thrones) and Shobu Kapoor (EastEnders) among others.

And whatever the viewers make of it, Davies says he and the rest of the cast were in stitches.

“I’ve seen the blooper reel and it will be amazing if I’m ever employed in this business again if it ever makes it out,” he confides. “It’s just rank amateurism… I laughed so much.”

As a self-confessed “glass-half empty” person, Davies admits he didn’t write roles for specific actors in case they said no. “The only one I had really in mind was David Mitchell,” he says.

“And that’s because when I watched the German original, I thought, ‘God, David Mitchell would be good in this part’. When I subsequently rewrote it, I had him in mind throughout. So it would have been a bit of a blow if David had said no.”

Given the material, he’s adamant the show avoids straying into tastelessness. So were there ever any moments where he thought: “Am I pushing it too far?”

“I don’t think so,” he says, after a pause. “There’s a fairly healthy appreciation of black humour in this country and I never felt like we danced over the line of taste. I could be wrong, but I don’t think it’s going to upset anyone.

“I hope that, whilst we’re making a lot of fairly dark jokes, we stay on the right side of tasteful.”

But there were a few moments when the realistic special effects took their toll.

“At one point I had to pick up a severed finger and put that into a bin. And even with it being a pretend severed finger, I revealed how ill-suited I am to crime scene cleaning.

“A lot of people have asked me about whether I found it difficult and, really, I just think it sinks into the background after a while.

“But we did get in touch with a real crime scene cleaner to make sure that when Wicky does his job, he’s doing it properly and I’m cleaning up blood the way it should be done. And when we mention chemicals, they’re the correct chemicals.

“The funny thing about crime scene cleaning, for me, is that 90 percent of it is just graft really. It is a huge pool of blood, and you need to clean that big pool of blood up.”

Before taking the role, Davies ‑ who found fame playing the psychotic Head of Sixth Form Mr Gilbert in Channel 4’s The Inbetweeners ‑ made it clear that he didn’t want to play another middle-aged father after appearing as a dad in five series of BBC comedy drama Cuckoo.

“That’s not in any way to criticise middle-aged fathers. I just felt like I’d done that. I was looking for something a little more unusual, and the BBC’s head of comedy said, ‘I’ve seen this strange German show and I think you’d like it’. So he sent me six episodes of the original, and I just loved it immediately and I couldn’t wait to have a go at adapting it.

“Wicky is quite an everyman really. His interests are not spectacular outside of his job. He’s a creature of habit and he has the same small group of friends that he’s had for his whole adult life really and he goes to the same place every weekend for a pint.

“I did make changes from the German original. Schotty, their lead character, is football obsessed, and his social life revolves around football. I changed that to music because I am a lifelong music fan and it didn’t seem like it would matter, giving him a different obsession.”

In fact, Wicky has a second obsession… with the 1980s. “It meant the brilliant art department and props people had to get hold of genuine 80s things for me to play with ‑ the room is full of things that my parents failed to buy me as a child!

“You’ll see that Wicky has this glee in his eyes when he starts picking up Rubik’s Cubes and riding on a Sinclair C5 or a Chopper.”

Davies was brought up by Welsh parents in Shropshire but his father drove his pregnant mother across the border so that he would be eligible to play rugby for Wales.

A variety of comedy roles followed his success on The Inbetweeners, as well as stand-up performances and appearances on Mock The Week, Would I Lie To You? and Fast And Loose. He recently won a Bafta for playing the eponymous Taskmaster on the hilarious celebrity game show.

Davies was in a relationship with Labour Party MP Liz Kendall for eight years, but the relationship ended in 2015. He has never married and doesn’t have children, like his character Wicky. But did he intentionally reflect this in him?

“We’ve hinted at a past to Wicky that is specific to him,” he says. “I just hope viewers will be equally excited to see where he’s going to end up.”

The Cleaner is on BBC One tonight at 9.30pm