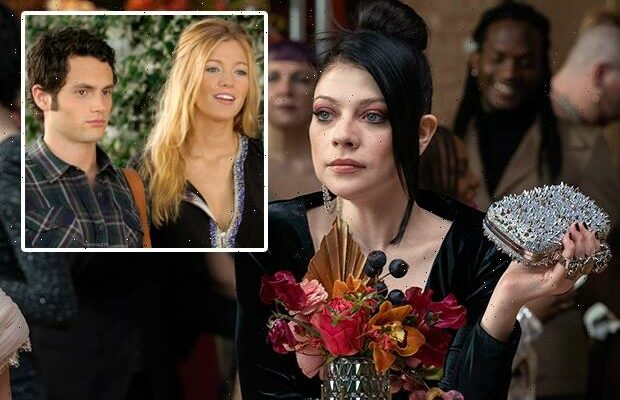 Gossip Girl‘s OG queen of mean made her long-awaited return to the Upper East Side on Thursday — and she came bearing gifts!

Gossip Girl OGs: Where Are They Now?

More specifically, Georgina Sparks (Michelle Trachtenberg) delivered key intel on two of the original series’ major players, Dan (Penn Badgley) and Serena (Blake Lively). And what better place to do it than the couple’s apartment, where a kidnapped Kate awoke wearing one of Serena’s signature dresses.

“Brooklyn Heights? I’d rather be back at Jesus camp than be caught dead here,” Georgina told her well-dressed prisoner. “This is Dan and Serena’s house. They fired their staff when they thought someone was breaking in. At first they thought it was the doorman, but when they kept coming home to this, they put up cameras everywhere. I had my son loop the image, so now they’re bringing in a paranormal expert. They have no idea I’m their poltergeist. [I’ve been doing this for] five or six years. At first it was small annoyances — taking a sock or two, turning the heat down. But then I wanted a little more fun, like replacing the oat milk with full dairy. Their kid’s lactose intolerant. They’ve seen every specialist, and no one knows what’s wrong.”

(So there you have it: Dan and Serena, who famously swapped vows in the original series finale, are still going strong — and they have a little Gossip Baby of their own!)

Georgina then coerced Kate into sabotaging Max’s dads’ vow renewal ceremony, which turned out to be merely a test. As she explained in the episode’s final moments, Georgina’s mission to “f–k s–t up” is only just beginning, whether Kate plays along willingly or not.

Of course, Georgina wasn’t the only character from the original series to appear this week. We also caught up with Nelly Yuki (Yin Chang), who is now the youngest deputy editor in the history of New York Magazine. She previously popped up in a Season 1 episode of HBO Max’s reboot.

Was Georgina’s much-hyped arrival everything you hoped it would be? Drop a comment with your thoughts on Season 2, Episode 6 below.